There has been no shortage of tears on Supernatural over the past 15 seasons, but perhaps no moment was more filled with waterworks than the heartbreaking ending of Season 2’s “Heart.”

With tears streaming down his face, Sam reluctantly prepared to shoot Madison (guest star Emmanuelle Vaugier), a woman with whom he’d formed a romantic connection — and who was also a werewolf with an uncontrollable killing streak. The emotional scene captured the sometimes devastating personal toll of the job on the Winchesters, while emphasizing that Supernatural was a series that was not afraid to embrace the more sensitive feelings of its two male characters. (The scene’s power ballad soundtrack, “Silent Lucidity” by Queensryche, also made TVLine’s list of the Best Supernatural Music Moments.)

For star Jared Padalecki, the episode’s conclusion marks the most he has ever cried on screen. “Oh, it was a flood!” the actor told TVLine ahead of the show’s final season. “Yeah, that and ‘Croatoan,’ where Sam has to tell Dean, ‘I’m not worth it. You got to let me die’… But I think ‘Heart’ was probably the most I cried that was used. [With] ‘Croatoan,’ I cried a lot, but we ended up dialing it down a little bit to keep the story going.” 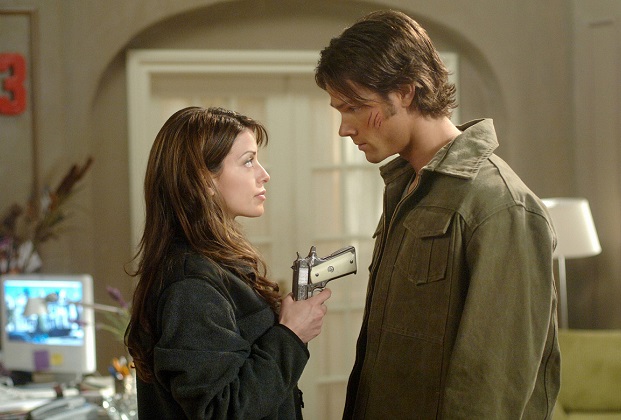 To give the “Heart” sacrifice the proper weight, Padalecki went to a very personal and emotionally heavy place. “I remember preparing for the scene and reading it and thinking about what it would be like to put my dog down,” he recalled. “I remember thinking what would it be like to love something or to care about something deeply and have to say goodbye to it, which is a weird mirror and parallel to what’s going on with Supernatural. I love it. I care about it dearly and deeply, and saying goodbye to it is difficult… [In that scene], my emotion as Jared or Sam, or feeling for Sam as Jared, just took over.”

It helped that the difficult exchange was one that Padalecki was able to share with his castmate Jensen Ackles, and that “it was being directed by Kim Manners — rest in peace — who I loved dearly and still do,” Padalecki noted, adding that his other co-star in the scene, Vaugier, was “a wonderful actress and was there 100 percent.”

“We were less than two years in, but I felt so safe with Ackles, with Manners, with my crew, with Emmanuelle,” Padalecki continued. “I was able to just kind of release a lot of stuff that was pent-up in Sam and in Jared, I suppose. It’s hard to try and figure out where it comes from. But I’ll never forget the filming of that scene.”

Padalecki’s performance was so potent that it even elicited an unexpected reaction from Ackles during filming. “I didn’t expect to get emotional, but watching him go through what he was going through… like, just that energy fueled me,” Ackles shared. “I think actually the last shot as it cuts to me, there’s a tear going down my face.”

Indeed, Dean’s single man tear became a memorable hallmark of the show in its own right — and neither it nor the striking flinch that followed when Dean heard Sam’s gun go off in the next room were scripted. “I didn’t anticipate to do that,” Ackles revealed. “That wasn’t my plan to do it, but it was just such an emotional situation, and I think that was really the first time where I was like, ‘We’re going to be able to work these drama scenes really well together.’ Because before that, we’d done the brotherly stuff fairly well, but that was the first time we really got heavily emotional, and I was like, ‘We can handle the scope now.'”

The Supernatural series finale airs this Thursday, Nov. 19 at 9/8c on The CW, following a retrospective special at 8 pm. Check out all of TVLine’s Supernatural Finale Week content here.