A bit of a sssssssurprise on this week’s The Masked Singer: Two performers were sent packing at the end of the episode in a double elimination.

Sadly, the sweet sound of Serpent and the smooth lyricism of Whatchamacallit will not be with us as Season 4 continues its march to the finale. But who was underneath all of those snake heads and shag carpeting? Read on for a recap of the Group B finals.

SEAHORSE | If Seahorse is who I think she is, now she’s just trolling us. Why else would she turn in that perfect version of Britney Spears’ “…Baby One More Time” if not to remind us of her dead-on impression of the pop diva? Continuing on last week’s theme, this episode had contestants’ friends and family offer clues. So Seahorse’s “spiritual adviser” appeared in a clue package that included: two baby dolls, Nashville-style fried chicken, a campfire and a Christmas wreath. This week’s additional gimmick trotted out a previous season’s costume in association with each current performer, with the caveat that the two are somehow linked. Seahorse’s was Season 3’s Astronaut (aka country singer Hunter Hayes), and his clue was: “Seahorse was never in a girl group.” (My guess: singer Tori Kelly.) 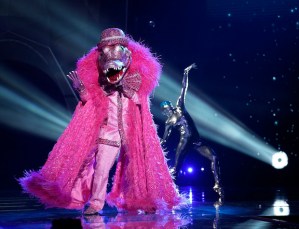 CROCODILE | Croc’s friend, an “interviewer to the stars” mentioned how much he and the pink reptile like to globetrot. “We’ve been all around the world together,” he said. “Once, we traveled to six continents in 100 hours.” Crocodile performed a stripped-down version of Leona Lewis’ “Bleeding Love” that was really nice, right through the falsetto at the end. Crocodile’s previous season link: Bee (aka R&B singer Gladys Knight), who revealed that “Croc was in a huge cult-classic movie.” (My guess: Backstreet Boy Nick Carter.)

WHATCHAMACALLIT | There didn’t seem to be much to go on, clue-wise, when Whatchamacallit’s high school teacher/mentor talked about his teen years. But the visual aids included: a coffee maker, a crown, Smarties candies, ping pong and a member of the British Queen’s guard. Whatcha rapped “Lean Back” by Terror Squad feat. Fat Joe and Remy Ma and did his usual good job. His previous season link: Ice Cream (aka YouTuber Ninja), who revealed that “Whatcha’s already won a championship.” (My guess: Former National Football League player Michael Sam.) 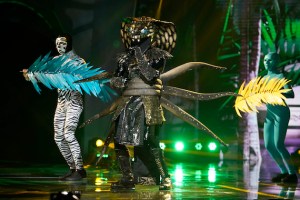 SERPENT | The big snake’s college roommate mentioned how “Fame found him” and “It was like God flipped the light switch.” Other clues in the video included: Good Mayo and Good Peanut Butter, an ambulance and a scrub bucket with gloves. He performed “Cool” by the Jonas Brothers and sounded velvety and gorgeous. His previous season link: Eagle (aka talk show host Dr. Drew Pinksy), who revealed that “Serpent has sung with one of [the judges] before.”