David E. Kelley’s ABC drama debuted Tuesday, introducing viewers to Cody Hoyt (played by Shooter’s Ryan Phillippe) and Cassie (Pitch‘s Kylie Bunbury), private investigators and sometime romantic partners whose life quickly gets complicated by Jenny (Vikings‘ Katheryn Winnick), the ex-cop who’s also Cody’s estranged (and very angry) wife. Jenny tracks Cassie down at a bar, and they get into a fistfight that lands them both in an urgent care clinic. But the trio’s love triangle quickly takes a backseat when Cody and Jenny’s teenage son Justin reports that his girlfriend might have gone missing. (Don’t worry: Before that happens, Cody — who certainly seems like he’s recently been with Cassie, shags Jenny in his log cabin.) 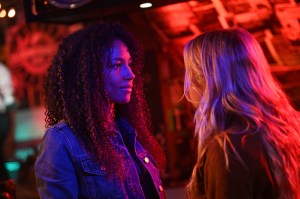 What we know but the trio of gumshoes do not: Two sisters, Grace and Danielle, are on a road trip to visit Danielle’s boyfriend — the aforementioned Justin. At one point, they narrowly miss hitting a big rig truck driven by a man named Ronald. And the reason we know his name is Ronald is a) we’ve seen his mother, with whom he still lives at age 38, berate him and b) we’ve spent enough time with him prior to this point to watch him tase a sex worker at a truck stop. 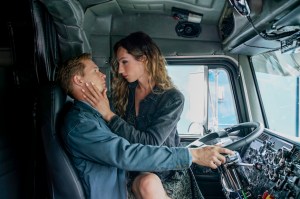 Anyway: To avoid traffic on the highway, Danielle and Grace reroute to roads near Yellowstone National Park. And when their car breaks down, they’re horrified to realize that Ronald is driving the only other vehicle on the road near them. He gets out of his cab, breaks both windows in the girls’ car and tases them. They wake up, bound, in the back of his truck next to the sex worker, whose name is Michelle.

Michelle is wrapped in plastic like a Dexter special, but she’s still alive. And when the women start making noise, Ronald pulls over to see what’s going on. They manage to get a jump on him — Michelle stabs him in the neck with a tease comb, which makes me like her so much — but he still manages to tase them all into submission. When they wake up, they’re chained inside what looks like a shipping container in a warehouse somewhere.

After a little poking, Cody heads out to where the girls went missing. He hooks up with a Montana State Police officer named Rick (American Horror Story‘s John Carroll Lynch), who tells him that there have been several young women who’ve gone missing in the area in the recent past. Rick seems like a by-the-book cop, a bit conservative (if the scenes with his wife, whom he calls “Mother,” are any indication). But he also seems harmless… until he shoots Cody in the face at point-blank range (!), then places a phone call.

Now it’s your turn. What did you think of the premiere? Did the twist surprise you? Grade the episode via the poll below, then hit the comments!