In the Season 2 premiere of His Dark Materials, Lyra is a paragon of pandemic propriety. She social-distances. She forms a pod. She even manages (for the time being) to evade the silent, airborne beasties that plague an entire population.

But as devoted readers of Philip Pullman’s novels know, our heroine’s brief respite in an eerie and abandoned city comes with its own set of dangers — and we’re not even talking brewing between two very powerful factions with their own conflicting interests in the girl.

Read on for the highlights of “The City of Magpies.”

After what Asriel did — chaos! world-ending! world-maybe-being-born-anew! — Lyra and Pantalaimon make their way on foot through the world she stepped into during the finale. She’s sad about Roger and confused about her parents’ apparent evil ways. Pan gently tells her they can’t go back, so they press on until they see a city that looks like the one in Asriel’s photogram. “The city in the sky,” Lyra says, a little in awe.

Lyra hops a gate to get into the city, which looks abandoned. Pan wants her to ask the alethiometer what’s going on, but she refuses, because she no longer trusts the device. “Without it, would Roger have died?” she says. “No, we need to make our own way now.”

‘MY DUST IS NOT THE SAME AS YOUR DUST’ | While the duo is looking for something to eat, a teenage boy approaches them — he’s the same one we saw stepping into another world last season. Lyra pins him to the ground before he can say one word: When things calm a bit, he introduces himself as Will Parry. Lyra and Pan are suspicious as to why he doesn’t have a daemon. Will is shocked to see a talking animal. They eventually ascertain that neither is from the world they’re currently in, and Lyra tells him about the concept of Dust.

“I’m guessing my dust is not the same as your Dust,” he says. She muses that some people think Dust equals sin, but “if bad people think it’s bad, then maybe it’s good.” Eventually, they notice two girls watching them, but the girls take off running when Lyra approaches. After a chase, Lyra knocks them down, and then the foursome share a tense snack.

“Where are the grownups?” Will wonders, which prompts the girls to say that “since the attack, the spectres are everywhere.” Long story short, spectres are phantasm-like creatures that only adults can see and that only attack adults. “They take your insides out. You’re still alive, but everything that makes you human, that’s gone,” they warn. The girls leave, and Will makes sure to pay for the supplies they’ve eaten, despite Lyra’s mocking. I only point this out because it’s evidence that, from all appearances, Will is a good egg.

Will invites Lyra to partner up with him, and she interprets this as an invitation to move into the house he’s commandeered. There, she’s introduced to the concepts of showering and omelettes (hers have a whole lot of shell, but it’s the thought that counts!). And as the pair (plus Pan) explore the town, they see there’s a tower at its center — Will snaps a photo with his smartphone — and they notice a young man who appears to have been lobotomized but really was just spectre-fied. It’s sad and scary; afterward, Lyra and Will take on an even more somber air.

That is, until they see a group of kids, including the girls they met earlier, torturing a cat. Will jumps in, picking up the poor feline, while Pan becomes something big and growly, which scares them away. Later, while sitting outside, Will and Lyra chat about the differences between their worlds and realize that there’s an Oxford in both, which makes Lyra very excited. She wants to talk to a scholar at his Oxford, because the one she called home isn’t safe anymore. Will vaguely mentions that he has “things to check on at home,” and agrees to take her in the morning. 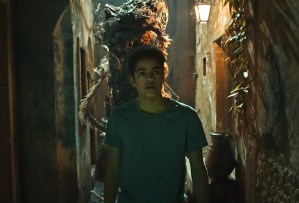 ‘HE’S A MURDERER’ | Upstairs that night, Lyra finally asks the alethiometer about Will. “He’s a murderer,” she murmurs after reading it. “The good kind.” Also? “He’s connected tot his place. He’s got something to do here. I think we both do.” Meanwhile, outside, Will has a vision of a knife and the tower. As he slowly begins walking toward the structure in question, spectres follow him, and they are HORRIFYING.

Meanwhile, the Magisterium has captured Katya, one of the witches. The men — including the cardinal and Father MacPhail — also want to know what Asriel told Mrs. Coulter that night on the mountain. She maintains that she didn’t make it to him in time, then volunteers to chat with (read: torture) Katya to learn what she knows.

Elsewhere, Lee appears before the witches to announce that he thinks Grumman has a magical object that can help protect Lyra, and he wants to go get it for her. Serafina Pekkala gives him something that will call her to his side for help whenever he needs it. (Side note: Did anyone get a good glimpse of what it actually was? In the books, it’s a flower, but in the show, I found it very hard to see.) Ruta Skadi, of another witch clan, shows up then and asks for help rescuing Katya — it doesn’t go as well as she’d like. So eventually, Ruta flies off and winds up getting to Katya only in time to mercy-kill her before she can tell Mrs. Coulter too much. What she does tell the dark-lipstick-loving villain, though: The prophecy is about Lyra, and “She’s known by another name. I will not betray the child of the prophecy.”

Oh wait: Speaking of killing, Mrs. Coulter and Father MacPhail conspire, apparently to make it look like the cardinal died of the non-lethal injuries Ruta inflicted upon him during her visit to the Magisterium’s ship.