Bob Hearts Abishola opened Season 2 with a marriage proposal — but it didn’t pan out the way Bob had planned.

In Monday’s episode, Bob enlisted Tunde’s help to buy an engagement ring. Shortly thereafter, Abishola caught wind of Bob’s intentions and confronted him before he could pop the question.

Without going into great detail, Abishola shared her belief that a traditional marriage is more trouble than it’s worth. As she previously explained to Kemi and Gloria, a traditional Nigerian wedding would first require her to return to her native land with Bob so the sock salesman could present himself to the rest of her family. She’d also have to confront her estranged husband and ask for a divorce.

In the end, though, Abishola had a change of heart. When Bob caught up to her on her bus ride home from work, determined to make the nurse his bride-to-be, Abishola cut him off and asked him to marry her. “This is going to be so hard,” she told him. “But since when have things ever been easy for us?”

Reflecting on the premiere, showrunner Al Higgins tells TVLine that it was fellow co-creator Chuck Lorre who sold him on the proposal storyline. “We weren’t always planning to have Bob and Abishola get engaged so soon,” he says. “Lorre is the one who said, ‘Let’s speed this up. This show is about love, so let’s give the audience something hopeful.'”

Once that idea was etched in stone, it was determined that it should be Abishola, not Bob, who popped the question. “We thought it would be nice to see Abishola’s journey, from initially fighting this relationship in the pilot to ultimately being the one who asked to spend the rest of her life with Bob,” Higgins explains. 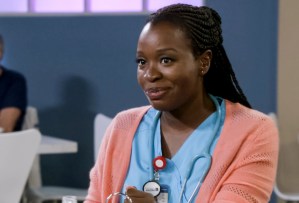 Moving forward, Season 2 will address all of Abishola’s concerns about marrying Bob, beginning with the arrival of Abishola’s as-yet-unseen husband. “Bob and Abishola are willing to go to Nigeria and deal with this, but the situation is brought home, so to speak, when her first husband, now successful, comes to Detroit on business,” Higgins reveals. “There will of course be trials and tribulations leading up to their wedding, but know, no matter what, Bob and Abishola love each other and that will win out in the end.”

What did you think of Bob Hearts Abishola‘s Season 2 premiere? Grade it via the following poll, then drop your thoughts in a comment below.