Throughout Sunday’s Fear the Walking Dead — a continuation of what’s been a startlingly good season — John anticipated things taking a major turn for himself and wife June. But at the last second, there was… well… an unexpected turnaround, one that left him making a change that we’d never have believed before Janis’ death. What did he do? Read on and find out.

‘TURNS OUT SOME FROGS VOMIT UP THINGS THEY’D RATHER NOT EAT IN A MOST PECULIAR WAY’ | As “Bury Her Next to Jasper’s Leg” began, Virginia and her Rangers pursued and questioned a middle-aged runaway about a mysterious “them” that was (were?) of great concern. Rather than offer up any intel about the group that was spray-painting “The End Is the Beginning” everywhere, the woman committed suicide, setting the stage for the baddies to [insert episode title here]. From there, we learned that since becoming Ginny’s “employees,” June and Sarah had transformed the latter’s rig into an unusually large ambulance. But since they were stretched way too thin, they were always getting where they needed to go too late and finding themselves able to do too little. (Hence, newcomer Malcolm’s death during surgery to remove his appendix and, if I’m not mistaken, the fastest transition ever.) What our heroines really needed was a hospital. Natch, June had already asked Ginny for one — and been turned down.

After John rendezvoused with June and Sarah, his wife rode with him toward their next stop: Paradise Ridge. When she expressed her disappointment at not actually being able to help anyone, he suggested… um… ya know… “we could leave.” It was, he noted, just 100 miles from Paradise Ridge to his cabin, and he was still sorry that he hadn’t taken up Janis on her offer to bequeath him her and Cameron’s escape plan. When June protested that she wanted to save people, he said, in that ultra-sincere way of his, “You could save me.” Though he wouldn’t tell her the full story of what had happened with Janis, he did float the idea that he wouldn’t last long if he stayed in Lawton. What about all their friends? June sensibly asked. “You’d want this for them, wouldn’t ya?” he replied. With that, the matter was as good as settled until… 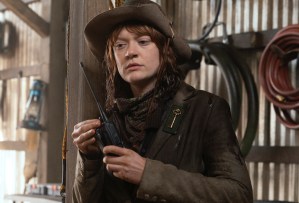 ‘SOME DOGS YA GOTTA KNOW WHEN TO PUT OUT TO PASTURE, JUNE’ | … they as well as Sarah were summoned to Tank Town. There had been a terrible accident since Ginny ordered production tripled, Lucy explained. When the trio arrived, it was a disaster scene. The newest well had blown, and if the winds shifted — heck, if anyone farted! — more could go up in flames. Oh, great — and Ginny had shown up with Hill and Marcus, apparently her favorite Rangers. No matter, June assured John. They’d help, then they’d get the hell outta Dodge. As if it was going to be that easy! Ginny immediately eyeballed a tank with “The End Is the Beginning” painted on it and deduced that “somebody meant to do this.” So nobody was being “ambulanced” to safety until she got answers — not even Wes, who had a stomach full of shrapnel. (Am I the only one who forgot that Wes, who I actually love, was even on the show? It’s been a minute!)

After fighting off a walker with razorblades attached to her fingers — well, that’s new! — Ginny refused to let June treat Wes until she’d questioned the artist, whose bunk was lousy with spray-paint cans. Over and over, he insisted that he didn’t know who “they” were, to the point where June defied Ginny and sedated him rather than allow him to continue to be tortured. Once he was finally loaded on the rig, June and Ginny were to follow, but they were trapped back at Tank Town by a massive explosion. (Who farted?!?) When they awakened, a walker got the best of Ginny and did more than kiss her hand. June could amputate, right? “Yeah,” she admitted. “But I’m not going to,” because Ginny had delayed the evacuation, costing even more innocents their lives. So there! 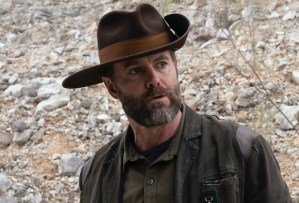 ‘YOU MAY NOT LIKE ME, BUT YOU NEED ME’ | After June won the scuffle over the one axe in the shack in which she and her nemesis were holed up, she actually threw Ginny’s “Some dogs, ya gotta know when to put down” line back at her. Desperately, Ginny pleaded her case — and tried to paint “them” as being more interested in killing than living. But June remained unmoved; she was intent on letting Ginny die in order to restore John’s peace of mind. Finally, Ginny asked June to look after Dakota. It destroyed her to love her sister so much and not be able to help her. Since that struck a chord with June, she huffed, “Don’t make me regret this,” and wound up chopping off Ginny’s hand. Later, when the patient awakened, she appeared much more willing than before to tell June what she knew about “them.” But that was a conversation for another episode.

When June was reunited with Wes, Sarah and Lucy, her pals all had the same question: Why the heck had she saved Ginny, the bane of their existence? June had gotten the hospital in exchange, she explained. Um, Sarah pointed out, “This foursome ain’t exactly Johns Hopkins.” June knew that; that was why she’d also made Ginny give her a spare Marine — or someone who should’ve been a Marine: Wendell! The siblings were reunited! Less elated than Sarah, of course, was John. “Every time I run,” June explained, “it leads to something worse.” So she wanted to stick around and run the hospital. At that, you could just hear John’s heart sink. Still, it was a shock when the group went searching for a site, and he veered off, apparently willing to let go of June rather than remain in Ginny’s grip.

Wow. So… what did you think of “Bury Her Next to Jasper’s Leg”? Were you surprised that June let Ginny live — for any reason? Did John really leave June… or is he up to something? Hit the comments.