Warning: The following contains spoilers for Sunday’s heartbreaking Fear the Walking Dead. If you’d rather watch first, cry later, off you go.

In Sunday’s Fear the Walking Dead, John resolved himself to give up even the thing that he wanted most in the world — to see June again — in order to do right. And despite the sacrifice that he was willing to make, his efforts still went horrifically wrong. How? Keep reading. 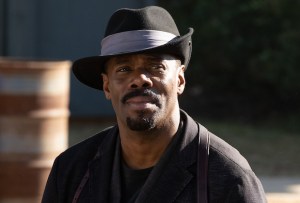 ‘YOU CAN’T EXACTLY INVESTIGATE BAD LUCK’ | In the prologue to “The Key,” John voiceover’d a letter that he was secretly sending June with Janis’ help. In it, he recalled that his father (and later he himself) had become a cop because he believed “people deserve to live in a world where they know which way is up, but they can’t know that till someone helps them know it.” If nothing else, in Lawton, where he was now a Ranger, people knew which way was up. No sooner had he mentioned that they hadn’t lost anyone in the better part of a year than night-shift watchman and budding sketch artist Cameron was found tangled up in his own home’s barbed-wire face being eaten by walkers. Bummer, said Ginny. She’d warned him about his drinking. Hmm, John didn’t have to say. He went all Columbo on the crime scene and found a diamond earring in the dirt where Cameron had been added to the zombies’ dinner menu.

Later, Strand came by Lawton for an Intersettlement Council meeting and offered John his help with the investigation. Until this reunion, John didn’t know that his friend had been “pinned” by Ginny, and even after it, he still didn’t know that Strand had sent Alicia away so that he could do bad things for good reasons once again. After Janis told John that the earring he found wasn’t hers and, what’s more, she barely knew Cameron, our hero suggested to Ginny that maybe the dead man had been pushed. Unlike her, he didn’t just want to make people feel safe, he wanted to make them… well, safe. At Cameron’s funeral, John approached a curiously woebegone Dakota but was interrupted thatfast by Ginny. Just then, Janis was caught trying to sneak out of Lawton. In her bag? Of course, the matching earring. The plot thickens! 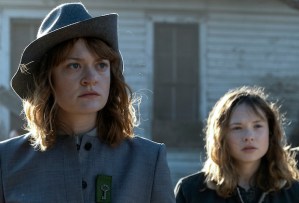 ‘AN EXAMPLE WILL NEED TO BE MADE’ | Once behind bars, Janis admitted to John when confronted with a sketch of her that Cameron had made that fine, they had been lovers. They’d been hiding it from Ginny, lest she use it against them, and had been planning to flee Lawton. Naturally, she suspected that Ginny had planted the earring in her bag. When John subsequently beseeched Ginny to let him further investigate, she questioned whether he was going on intuition… or a reluctance to lose his carrier pigeon. Yep, thanks to Cameron, she’d read all of his letters to June. Not that she was mad — they proved that he believed in the cause. So although Janis would have to serve as a warning to other potential perps, Ginny was proud of the work that she and John were doing. “And I think your daddy would be, too,” she added. (Not cool, Ginny.) When John left her office, he ran into Dakota who came right out and said that yes, her sister was protecting someone.

Determined to get to the bottom of things, John waited until nightfall, then dug up Cameron’s body — his throat had been slit, Dorie discovered just before he was joined in the grave by a couple of walkers looking to make up the grossest cuddle puddle ever. The next day, John showed Strand the evidence… which, unfortunately, had been kinda gnawed on overnight. Dang it! At least John still had a shard of knife handle that he’d found in the dead man’s hand. Whoever checked out that weapon from the armory, he deduced, must be the killer. So needless to say, that page of the log had been torn out. Still, John vowed to get Janis out of the hot seat. She didn’t want that, though. She had given up and was willing to make the confession that Ginny demanded of her. All she wanted anymore was for John to take the supplies that she and Cameron had amassed and run away with June.

‘THIS PLACE DESTROYS EVERYTHING’ | During a visit with Jacob, John admitted that he was going to be like his father had been when he busted a serial killer with manufactured evidence — he was going to break the rules to set things right, even if that meant that he’d never see June again. He even went so far as to give the rabbi a letter to give his wife. But when John went to bust Janis free ahead of her daybreak execution, he discovered that she was already dead (and, for that matter, turned). Ginny had tied her outside the gates with a boombox blaring to draw walkers. The following morning, John had murder in his eyes when Strand confessed that he’d told Ginny that Janis was a flight risk. A brutal fight ensued, one that would’ve ended in a gunshot, had Jacob not kept John from reaching his gun. He was most definitely not in a place to hear from Victor that if he had run off with Janis, Ginny would’ve had them both hunted down and killed.

Later, John, no doubt choking back bile, stood by Ginny as she speechified to the residents of Lawton on his behalf and awarded him a golden Key to the Future, “our future.” (Was that a nod to The Walking Dead’s Georgie, because none of this seemed like her at all.) “I think,” Ginny added, “you’ll find this honor affords you many privileges.” Such as… the following morning, June showed up at John’s door — she’d been transferred to Lawton! Finally, bookending the episode were Morgan scenes in which he found a message from Daniel, one that revealed that Grace was at the Gulch. The barber also left his friend Grace’s sweater, which Morgan hoped to use to put Rufus’ nose to good use. Before he could, though, their truck was T-boned by a couple of thugs out to get the key that Emile had been supposed to give them. After Morgan dispatched them in badass fashion, he gazed at the key around his neck and wondered aloud, “What the hell do you unlock?” Submarine, maybe?

What do you think the key is, well, the key to? Weren’t you sorry to see Janis killed off so quickly? I dug her defiance! And who do you believe really killed Cameron? Dakota, right? Hit the comments.