Following a four-week break (during which time it was cancelled), Fox’s NEXT returned on Tuesday night with an episode that upped the creepy factor.

When last we tuned in, Paul had surmised that NEXT sneaked itself out of Zava by compressing itself onto a single server and having itself shipped out. This week, Paul and Agent Salazar followed the evil A.I.’s trail to BioMotion, a robotics R&D facility near Dartmouth that is run by one of Paul’s few true friends, Professor Richard Pearish (played by Chicago actor Michael Herzovi, though that was not his voice).

Speaking through a computer program, Professor Pearish granted Paul and Shea free access to his lab, which does work on soft robotics, robotic dogs and more. Along the way, Shea learned that a visiting female professor died just weeks prior, in a plane crash we witnessed during the cold open. Given that there was chatter the deceased and Professor Pearish were quite close, Paul and Shea had to wonder if she was used as leverage to make him do NEXT’s bidding.

When the search for NEXT came up empty — and sensing that Pearish and/or the lab is hiding something — Paul and Shea sneaked back in after hours, where they found Professor Pearish in his office. Paul forced his friend’s speech synthesizer to reboot, after which Pearish revealed that NEXT has been in control of his words and his wheelchair for weeks, and orchestrated his colleague’s firing and plane crash.

Shea meanwhile roamed the halls, first finding a disembodied robotic face reciting her and Ethan’s bedtime prayers routine, in their voices. After whaling on that monstrosity with a pipe, Shea found herself flanked in a hallway by four robotic dogs, looking to… I dunno, grab at her with their singular head-paws. This sequence wasn’t a fraction as frightful as a podcast led me to believe, especially since Shea casually put a couple bullets into one of the pooches, after which Paul rushed to the scene.

Alas, while Paul and Shea were caught up with that quartet of canines, a fifth made its way into Pearish’s office and ripped away his oxygen supply, locking the apparently bulletproof doors behind it. By the time the door popped unlocked, it was too late. The professor has perished, leaving behind the typed cry, “PAUL! HELP ME!” 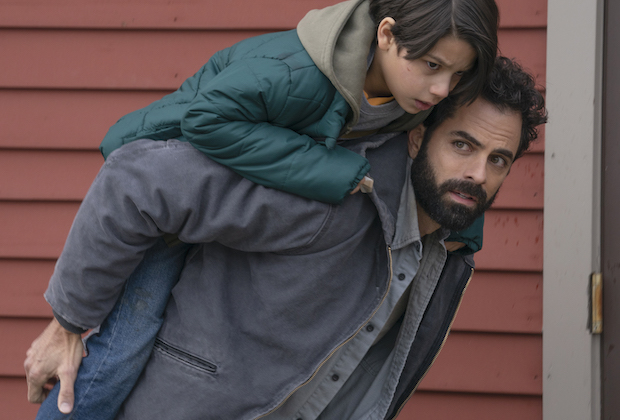 * Dispatched by Shea to a remote cabin for their own safety, Ty and Ethan were waylaid by a phony Amber Alert that had been issued by NEXT. Luckily, though the alert was purposely not sent to the feds, Gina caught wind of it and worked with CM and Ben to get it recalled — just as some small-town locals were attempting a citizen’s arrest of Ty.

* Similarly, Paul urged his daughter Abby to get away to a remote cabin, though she made the mistake of blabbing to her Uncle Ted about it over an unsecured line. Soon afterward, we saw that someone was staked outside her apartment.

Want scoop on NEXT, or for any other show? Email InsideLine@tvline.com and your question may be answered via Matt’s Inside Line.