At the top of Wednesday’s Masked Singer, host Nick Cannon promised “a reveal that will break the Internet.” Since you’re reading this, safe to say, it did not.

But the episode did introduce Group C, a new batch of performers that included Mushroom, Lips, Squiggly Monster, Broccoli and Jellyfish. Read on to see how their performances went and to find out who said hello and goodbye within their very first episode.

SQUIGGLY MONSTER | Cannon’s observation — “lookin’ like Beetlejuice on steroids!” — was apt; the Squiggly Monster’s costume is black-and-white striped and a little ooky. (All those jiggly eyes!) He admirably performed Creedence Clearwater Revival’s “Have You Ever Seen the Rain;” the guy seems like someone who can sing and has nice vocal control, but his time on stage felt more like really good karaoke than a seasoned artist’s vocal outing. Clues included: salami, chocolate chip cookies, yarn, a yellow stethoscope and his referring to himself as “a hyperactive voice of the future.” (My guess: conservative radio host Glenn Beck, which is a total shot in the dark.) 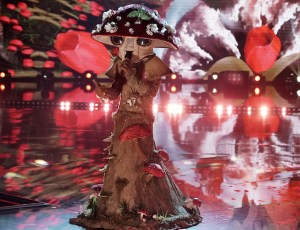 MUSHROOM | The judges all thought Mushroom was female… until the person inside the costume started singing “This Woman’s Work” by Maxwell in what seemed like a male’s falsetto. The quiet performance was pretty powerful, but I was distracted by the 300 Hamilton references Mushroom packed into their clues package. In addition to all the lyrics (“a healer and a scholar,” “young, scrappy and fungi” etc.), clues included: a violin, a grasshopper or cricket, a hot dog, Star Search, “I started out in the rat race at a job that may surprise you” and a giant beet. (My guess: Singer Frank Ocean.)

JELLYFISH | The many-tentacled greenie seemed a little nervous before her number, but she nailed Fergie’s “Big Girls Don’t Cry.” All of her hints pointed toward her being on the young side, and I am ashamed that the “Bad Guy” lyrics printed on the sign outside the festival in her clues package were familiar but I had to Google them to realize why I knew them. Witness my shame! Clues included: White lilies, a tiara, organ pipes, fans, “I reigned supreme over an entire underwater kingdom” and baby powder. (My guess: no clue.) 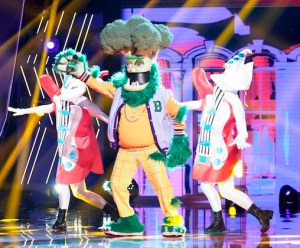 BROCCOLI | OK, so I laughed at the intro graphic that said Broccoli’s weakness was that he is “easily steamed.” It’s been a looooong pandemic, folks. Anyway, Broc presented as young in his package, which was full of TikTok references and such, but seemed much older when he sang “House Is Rockin’/Whole Lotta Shakin’ Going On” by Stevie Ray Vaughan and Jerry Lee Lewis. Clues included: eggplants, a treehouse, “a contest greased the wheels for my career,” a car wash and a swing. (My guess: no clue.)

LIPS | Lips was wheeled out on a divan, which only accented the party-diva vibe she gave off throughout her performance. Her clues package was full of rollerskates, leopard print and references to her having “a big mouth.” And she talked, vamped, laughed and snorted through much of her performance of Odyssey’s “Native New Yorker,” which should’ve been a huge tip-off to fans of daytime TV. (My guess: I knew who Lips was before I viewed the episode, so I recuse myself from this one.)

THE UNMASKING | When Lips was unmasked, she was revealed to be talk show host Wendy Williams. (Read her exit interview here!)