Station 19 showrunner Krista Vernoff giveth, Station 19 showrunner Krista Vernoff taketh away. At the end of Season 3 of the ABC drama, the EP had Grey’s Anatomy doc Carina forgive unfaithful lover Maya. But, rather than let Dean admit to Vic that he’d fallen for her, the boss had him ask his roommate to move out. Come Season 4, kicking off November 12 with a three-hour crossover event, the characters will continue down the paths they’ve chosen, Vernoff tells TVLine, however smooth or bumpy they may be. 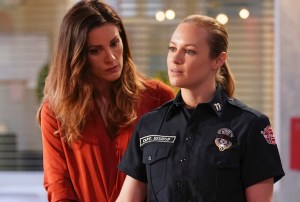 “Maya and Carina light up the screen together” in the episodes to come, she promises. And since Maya has finally seen her father for the abuser that he is — and Stefania Spampinato has been made a Station 19 regular as her girlfriend, Carina — we’ll get “more of that. Beyond that, you’ll have to wait and see.”

Vernoff is at least a smidgen more forthcoming about what it’ll take for Dean to admit that he’s made the biggest blunder of all time in pushing away fellow firefighter Vic, who’d been helping him care for newborn Pru. “It’s going to take a lot,” Vernoff says. “From Dean’s perspective, he has not made a blunder [by showing her the door]. He has made a difficult sacrifice in order to protect his friendship with Vic and by extension the entire Station 19 family.”

What do you think, Station 19 fans? Aren’t you rooting for Dean to just tell Vic already that he’s in love with her? Or are you hoping that she’ll reunite with Grey’s Anatomy’s Jackson? Hit the comments with your thoughts on the matter.