No matter which way you flip Lovecraft Country‘s Season 1 finale, it comes out tails — like, literal kumiho tails — and everyone loses.

Ji-Ah’s curse comes in handy at exactly the right moment in Sunday’s season-ender, and it’s the factor that tips the scales in Atticus & Co.’s favor in the fight against Christina. But as the series repeatedly has reminded us over the course of the last 10 episodes, fervent wishes rarely come true without somebody paying a steep price.

And in this case, Tic himself is that price: As Ji-Ah foresaw when she nearly killed him in Daegu, he dies among the ruins of Ardham, leaving Leti and their unborn child behind.

But this is a magical, mystical show… so is Atticus really dead? Read on for the highlights of “Full Circle.”

‘THE ANSWER IS IN YOUR BLOOD’ | Diana is still in a bad way when everyone rushes her back to the apartment at the top of the hour. Leti hands Atticus the scrap of paper with the spell on it; when he starts to chant, the Book of Names flips open all by itself and lands on a page with a familiar symbol. “That’s your birthmark,” Montrose whispers. Then, both Tic and Leti pass out at the same time.

Atticus finds himself back at the original Ardham, which is aflame, with his ancestor, Hannah. “The answer is in your blood,” she tells him, going on to reveal that she knew her child would always be sought after by members of Braithwhite’s order, so she used her master’s magic against him. But she unknowingly opened the otherworldly space they’re in when she opened the Book of Names, and for a long time, she thought the place was Hell. “It took a long time to understand that the fire was my rage made manifest, that it could be tamed,” she tells him, adding that magic is not to be feared “but a gift to pass on” and that he is going to “save them all.”

Elsewhere, Leti finds herself back with Hattie, whom we met in Tulsa in last week’s episode. Hattie explains that the baby inside Leti pulled her back with Tic, and that it’s her job to protect the Book of Names. So she starts practicing a spell with Leti, who looks worried. 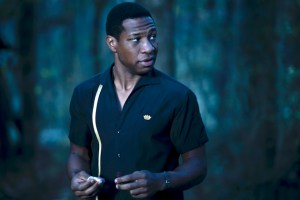 Then Atticus finds his mother, who hugs him while they both cry. He puts his head in her lap and tells her he doesn’t want to die.”But if we ain’t walking toward an altar to sacrifice ourselves for something important,” Dora asks, “what is our purpose?” She tells him that he has the best parts of her, Montrose and George inside him, and that what will happen is “a beginning, not an end.” The pair walk hand-in-hand into the room where Leti and Hattie are chanting, then they all stand around the empty bed. Their spell sucks the bad stuff out of Diana in the real world. Still, when the girl wakes, she’s horrified to see that one of her arms remains withered and useless.

A JOB TO DO | Once he and Leti have recovered, Atticus announces that they’ve got to use the Book of Names to defeat Christina. Montrose is against it, worried that his son will die. But Tic says that’s only one potential outcome — and because the book belongs to their family, he’s going to use it to protect their family.

So he and Leti take the elevator waaaaay down and make their way back to the museum via the catacombs. There, they summon both Hannah and the Braithwhite who raped her as well as Hattie and Dora, and after a few mishaps, they manage to slice off a giant swath of the man’s chest. He disappears in a swirl of smoke.

Christina gets wind that Atticus has the Book of Names and visits the garage, promising that if he gives it to her, she’ll find a way to achieve her goal without hurting his family. Naturally, he doesn’t believe her, and he refuses. So on her way out, she yanks Leti’s invulnerability. 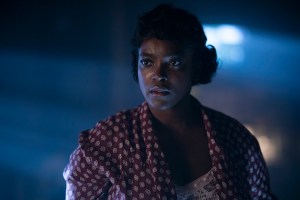 MAKING AMENDS | Tic meets Ji-Ah at her hotel’s bar and apologizes for the terrible things he said to her. Her mother died recently, and she fears that she truly is incapable of feeling, because she feels so empty. He tells her that’s just grief, and that she is part of his family now, thanks to their intertwined destinies. Meanwhile, at their mother’s grave, Leti confesses to Ruby that the reason she didn’t come to the funeral was because she was in jail. Then she asks Ruby to get some of Christina’s blood for them to use for the spell, and Ruby explodes. “You only want to be my sister when you need something, Leti,” she says.

At home, Ruby finds Christina working on the spell in the basement. They kiss, and then Christina asks, “Have you ever?” Ruby says no, and they start to get it on.

The next thing we know, Ruby shows up as Leti, Atticus, Montrose, Ji-Ah, Diana and Hippolyta are preparing to leave for Ardham. She hands Leti a vial of blood, Leti hugs her, and pretty soon everyone is singing along to The Crew Cuts’ “Sh-boom” while they’re on the drive.

THE POWER OF THREE | OK, so the gist of the spell: They have to connect Atticus, Christina and ye olde Braithwhite’s bodies in order for things to work. So in the woods outside Ardham’s ruins, Tic eats the slave owner’s skin (eew) and drinks the blood (eeeeew), then walks toward what remains of the house. As soon as he gets close, the townspeople grab him and strap him down to the nasty-looking apparatus Christina has set up. But what he doesn’t know: Up in the tower, Leti has just realized that Ruby isn’t Ruby… she’s Christina, all potioned-up. Christina-as-Ruby tells Leti that Ruby is dead, then they have a crazy fight, which ends when Christina-as-Ruby pushes a very vulnerable Leti out the window. She lands on the ground hard. At the same time, the townsfolk surround the rest of Atticus’ group and make them watch while Christina goes about her evil ways.

The blonde slashes open Atticus’ arms and basically takes a shower in his blood, chanting a spell that starts to siphon off his power and put it in her. Elsewhere on the property, Leti wakes up (yay!) and notices that she has a protective mark on her again. So she runs to the ceremony and makes it there in time to make eye contact with Atticus, mouth “I love you,” and watch him die. 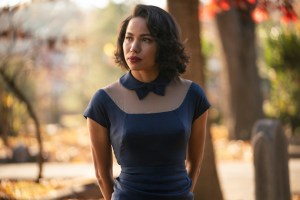 DON’T MESS WITH MAMA | Leti is so enraged, she runs up and stabs Christina straight through the torso. “You’re too late,” Christina says, gleeful. “I’m immortal now.” She also reminds Leti that the spell she’s chanting won’t work: The vial of blood she (as Ruby) contributed to the cause didn’t actually come from Braithwhite veins. Hippolyta helpfully yells to Ji-Ah that Leti’s magic won’t work, because Christina and Atticus’ bodies aren’t connected.

Ji-Ah looks up at the dark cloud spiraling to the sky and knows what she has to do. She steps directly into its path, goes all kumiho and spears both Christina and Atticus with her tails — connecting them. Scenes flash before her eyes, including Atticus’ baptism (which we saw him preparing for with Leti earlier) and his delivering a letter to Hippolyta. Then there’s a giant explosion.

Christina comes to a while later, but she’s trapped under heavy rubble. “You bound me from magic,” she tells Leti. “Not just you. Every white person in the world,” the expectant mother informs her. “Magic is ours now.”

HOLLOW VICTORY | Sadly, though, Ji-Ah’s move didn’t do anything to bring Atticus back to life. Montrose has a hard time believing that his kid is gone, so Hippolyta hands him the letter Tic gave her. In it, the younger man explains what he did to protect their family and wishes “supreme happiness” for his dad. He asks him to take care of his son, as well. “As little George’s grandfather, you have a second chance to be the father you always wanted,” he writes. “Don’t waste it. Love, Tic.”

Christina is still moaning under the rubble when Diana happens upon her sometime later. Did I mention that Diana and the black shoggoth have become besties? Because that definitely happened while she was waiting in the car near Ardham.

Anyway, Christina begs for the girl’s help, but Diana just shakes her head. “You still haven’t learned,” she says, taking off her coat to reveal the bionic arm that Hippolyta outfitted her with earlier in the episode (but which we haven’t seen until now). Diana puts her cold, robotic hand around Christina’s throat and squeezes until it pops. As the shoggoth turns to leave, it screams at the sky.

Now it’s your turn. What did you think of the episode? Grade the finale via the poll below, then hit the comments!