Rose McGowan is defending herself against insinuations that her criticism of The CW’s Charmed reboot has anything to do with the diversity of the new cast — while also making a few other points.

But first, a quick recap: Following a recent Instagram Live video in which McGowan and fellow original Charmed star Holly Marie Combs expressed their displeasure about the reboot, Sarah Jeffrey tweeted that it’s “sad and quite frankly pathetic to see grown women behaving this way.” Combs responded to Jeffrey’s tweets earlier this week, and now McGowan is adding her response to the conversation.

“Dear Sarah Jeffery, I honestly had no idea who you were til you tweeted,” McGowan wrote in an Instagram story on Wednesday night. (Always a great start.) “I have been too busy fighting monsters & fighting for a massive Cultural Reset to notice who’s in the reboot. Absolutely nothing to do with race, that’s quite a stretch you took. I’m beyond glad any WOC has a well paying job. Hell yes to that. I’m sure you are a great actress.”

After clarifying that her issues with the reboot aren’t race-related, McGowan continued, “My quibble (google it) is about execs & producers & @wb network trading on years of my work & name in such a cynical and obvious way – a money grab to cash in on the Charmed name. I do not care that they remade it, I have far bigger things I’m dealing with. I do not nor will I watch a show I disagree with on principle.”

Read McGowan’s message in full below, then drop a comment with your own thoughts. 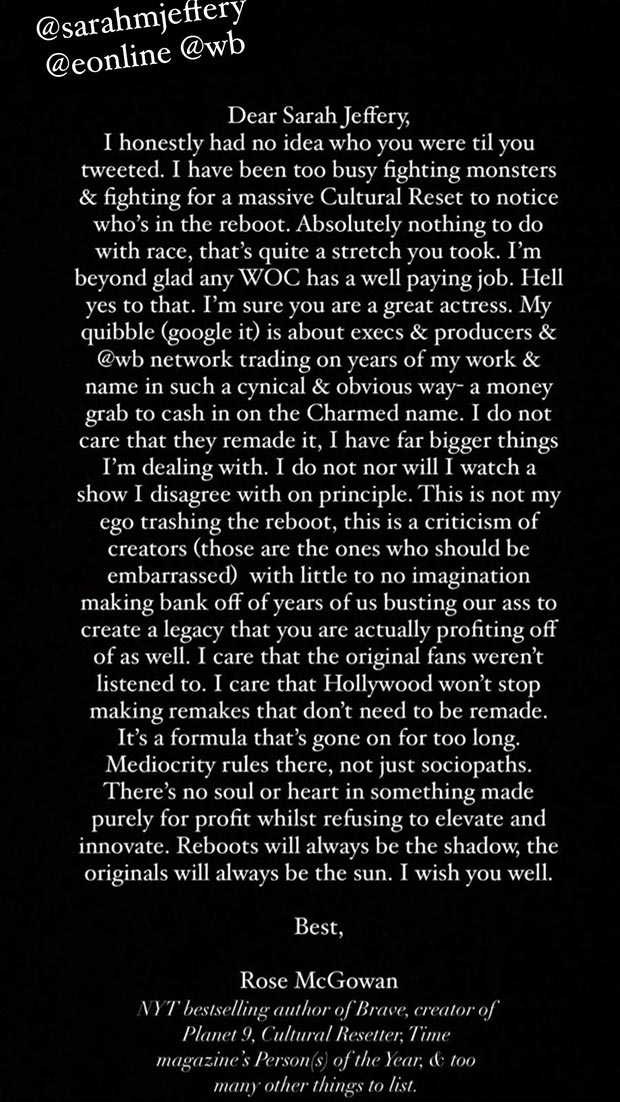