Warning: This post contains spoilers from The Haunting of Bly Manor.

If the Haunting anthology has a heroine, it’s Victoria Pedretti.

In The Haunting of Hill House, Pedretti played Nell, the youngest Crain child-turned-horrifying spectre. In the second part of Mike Flanagan’s Netflix series, The Haunting of Bly Manor, Pedretti is Dani, a nanny whose life is forever changed after she takes a job at a haunted British manor home.

Throughout the season, Dani is tortured by visions of a man with bright lights where his eyes should be. We eventually learn that the man is Edmund, the fiancé Dani broke up with after she realized that she was gay. Unfortunately for both of them, Edmund was hit by a car and killed moments after Dani ended their engagement; the lights in his eyes are a reflection in his glasses from the truck that struck him down.

Eventually, Dani overcomes her guilt about Edmund, falls in love with the house’s gardener Jamie and makes a bold move that frees Bly Manor from the hauntings that have plagued it for centuries. (For all the details, read a finale recap here.)

TVLine got Pedretti on the phone to discuss the season, which she explains may make you a “little bit nauseous” — and why that’s a good thing. 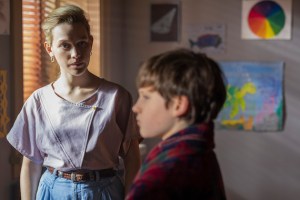 TVLINE | There seems to be a dichotomy in Dani, who is undone by seeing Edmund in the mirror but also goes after Peter Quint with a fireplace poker. Talk to me about when she feels empowered to act, and when she doesn’t.
Certainly. Her ability to feel empowered, and the sense of duty in especially protective things that she does, is for the sake of the protection of these children. She really believes in the innocence of children, and the need to create a safe environment for them to deal with their feelings, and learn about themselves, and how to take care of themselves, even, and how to advocate for themselves and their needs.

And anything that might get in the way of that, she’s a fierce opponent of. But when it comes to the way she sees herself, I think she struggles with offering herself the same sense of deserving, in terms of having a safe and loving environment to learn about herself and what she needs. She deprives herself of that because of the things that she’s done that she [thinks] make her not deserving of that anymore.

TVLINE | She also has this very delicate love story that unfolds in the middle of chaos. What do you think draws her and Jamie together so quickly?
I think it’s the level of true compassion and lack of judgment they show each other. Jamie leads with really having strong boundaries that she asserts. She doesn’t want to be f–ked with. She doesn’t need drama, you know? She’s had that in her life, and she’s found this new, deep peace with her plants and whatnot, and as she says, she likes her life boring. 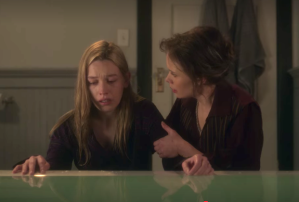 And that is ultimately what Dani wants as well, but she’s caught up in this dramatic story in her mind: that she did something so horrible that she’s now tainted, and if she ever truly reveals herself, she will be rejected and seen for the monster that she sees herself as.

But Jamie forces her into being, like, no bullshit. Like, we’re open with how we feel and how it’s going to be, and we come to it with what we’ve got and how we’re ready, and we’re going to take it day by day. But we’re not jumping into this like Quint and Bex, being like, “We’re soul mates, and we need to sacrifice all this for each other.” [Laughs] Both of them have sacrificed enough at this point, you know?

That’s what’s special about it. What’s not special about it is that within all of the chaos, they find peace and love. I mean, I think that’s a very true to life. Within all the s–t, we can stand together and offer each other solace and comfort and love, and that’s what they do.

TVLINE | When you were just talking about how Dani thinks of herself as a monster, it made me think about how there are some interpretations of The Turn of the Screw — which is told from the nanny’s point of view — that see her as someone who is really not mentally OK and who is seeing things that aren’t actually there. Was that idea ever a part of the character or conversations you had with anyone about the character?
I mean, other than the ways in which it is evident in the script, no. She certainly has things that she has in common [with the book’s narrator], and there are things that she doesn’t. Yeah, I left them in the novel.

TVLINE | Have you watched the season yet?
Yes.

TVLINE | Were there any moments that rattled you when you were watching?
Rattled in what way?

TVLINE | Scared you? Made you jump?
I don’t know. It was a little while ago. Yeah, I mean, I get what people are saying about [the show having] that sense of dread, less than it’s outright scary, and more that it makes you, like, a little bit nauseous. Like, not to the point you’re going to, like, do anything about it. [Laughs] You’re not like, I need to stop watching this, and lay down and have some chicken soup. It didn’t, like, actually make you sick. It’s just that little slight nausea.

TVLINE | Between Nell and Dani, which was harder — in any interpretation of that word that you like.
Dani, a hundred percent. The turning point she is at her life is something really difficult that we all confront. It’s like, who are you going to be now? And living through that journey is really… I’m going through it kind of simultaneously. I’m also 25. We’re going through similar s–t. And it was more physically rigorous. The first season, I was nervous about f–king up completely. Now, every opportunity I have to work, I hold myself to this, like, this standard of not necessarily wanting to just do it, but to somehow exceed my expectations, and to keep growing as an actor, and to be better.

And with so much opportunity and responsibility, I was taking that really seriously. Having different directors added to the stress. Being in a country that I don’t know the culture was stressful. There were a lot of reasons that this season was a lot more challenging. The first season, we had nine months to shoot it. This season, we were trying to accomplish something comparable in far less time.

So, yeah, this one was certainly rougher. And Nell, as stressed as she was, wasn’t putting up any fronts at the point when we were meeting her. She wore her heart on her sleeve. The same can’t be true about Dani. There’s something additionally exhausting on playing the façade, especially somebody as bouncy, and energized, and anxious as this person is.