The pair of characters making up popular Game of Thrones romantic couple originally were conceived as brother and sister — and no, we’re not talking about Jaime and Cersei.

Missandei and Grey Worm — played by Nathalie Emmanuel and Jacob Anderson, respectively, on HBO’s juggernaut of a fantasy series — were at one point in the storytelling brother and sister. The revelation is one of many in Entertainment Weekly scribe James Hibberd’s new book on the TV show, Fire Cannot Kill a Dragon: Game of Thrones and the Official Untold Story of the Epic Series. 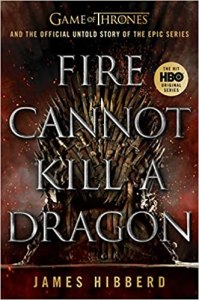 “When I first auditioned, the role’s description said Grey Worm and Missandei were siblings,” Anderson says in the book. “So [their romance] was definitely a surprise.” It wouldn’t have been the first time the show delved into intra-family relations; after all, the Lannister twins played by Nikolaj Coster-Waldau and Lena Headey were shown to be sleeping with each other in Thrones‘ very first episode.

“I wondered if this was going to be another incestuous situation,” he adds. “I’m just glad they didn’t suddenly reveal they were related.”

Anderson’s bit of trivia is one of many behind-the-scenes stories that make the book a veritable Loot Train for fans. So, like Sam at the Citadel, we’ve pored over the tome in order to highlight some of its best bits. Including:

* While the show’s brutal plot twists often made fans feel heartsick — Red Wedding, anyone? — a moment in the series’ first episode literally made cast members vomit. When the Starks come across a dead stag and its body is cut open, production used a real deer corpse that had been sitting around for a while. The resulting stench from the released gases caused the actors and some crew members to throw up. “I’ve still never smelled anything so terrible, and I wasn’t even anywhere near it,” producer Bryan Cogman says. “I was across the meadow in a producer’s tent. Just thinking about it, I can smell it right now.”

* Sibel Kekilli had to be talked into taking the role of Tyrion’s lover, Shae, who’d decided she didn’t want to play a scheming golddigger opposite Peter Dinklage. Showrunners David Benioff and D.B. Weiss “sent me a beautiful letter saying, ‘Please-please-please, you are our Shae. You did a great audition, and we’re going to change Shae a bit. We’ll do it different than the books,'” she recalls. “And they convinced me.”

* If it felt like direwolves, the awe-inducing canines emblematic of the Stark family, had a bigger significance in earlier seasons… that’s because they did. “The direwolves were supposed to mean more than they ended up meaning,” Cogman says. “Even in the first season, there were a lot of direwolf scenes we had to cut, even though we were just using dogs, because the dogs couldn’t execute the scenes; it would just take too long.”

Game of Thrones: Our Favorite Moments From the Final Season

* Speaking of Starks, at one early point, Benioff and Weiss wanted to cut Rickon from the narrative, but Thrones author George R.R. Martin convinced them that would be unwise.

* The showrunners also met resistance later in the show’s run, when they wanted Davos to be quite taken with Missandei after meeting her. “I fought them. ‘I’m not f–king doing it,'” Liam Cunningham, who played the Onion Knight, recalls. “It’s the only thing I ever stood up to them on. The woman is a goddess, but with Davos’s history with Lyanna Mormont and Shireen, you can’t have him getting the hots for a young woman.”

* After Bran meets The Night King in the cave in the Season 6 episode, “The Door,” production nicknamed the newly aloof, all-seeing Stark “Dr. Bran-hattan” — a nod to Watchmen‘s Doctor Manhattan.

* Benioff muses that, given such a large cast and such a long run, “the problems we had to deal with over the years in terms of cast misbehavior was so minuscule compared to what most people deal with… We only had, like, one or two d–ks in minor roles.”

* Along those lines, the executive producers also say that most actors took news of their characters’ impending deaths with grace. However, one didn’t. “One person argued with us on the phone for a half hour and then wrote a long letter why it was a mistake and still talks about it on whatever dumb forums he’s on,” Benioff says. (Got any guesses? Log ’em in the comments!)

* Emilia Clarke has a theory on what happened after Drogon picked up Daenerys’ dead body and left King’s Landing. “I think he flies around with her body until it decomposes. I literally think he keeps flying until he can’t fly anymore,” she says. “He just keeps grieving.”

* Those of us who were hoping that Arya would use her Bag O’ Faces more during the final season weren’t alone: Even Maisie Williams wanted more payoff, particularly when it came to Arya crossing a major name off her kill list. “I wanted her to kill Cersei, even if it meant she dies,” Williams says. “Even up to the point where she’s with Jaime, I thought he’s going to whip off his face [and be revealed as Arya], and they were both going to die. I thought that’s what Arya’s drive had been.”