Whether you’ve already read our reaction to The Walking Dead: World Beyond — spoiler alert: didn’t love it — now it’s your turn to weigh in. First, we’ll go over the densely-plotted premiere, then you can grade the episode in the poll beneath and write your own review in the comments. Ready or not, here we go.

‘WE’RE QUITE GOOD AT THIS, WHEREVER WE’RE FROM’ | Set a decade after the deceased began going on never-ending snack runs, The Walking Dead’s second spinoff quickly introduces us to the Bennett sisters. Artsy Iris (Aliyah Royale) is a perky, popular Tracy Flick type who dreams of herself as an empty — this show’s term for zombies. Brooding Hope (Alexa Mansour) is more rebellious, at least at first; as the series gets going, she stows away on a bus sent to welcome the Civil Republic Military’s Lt. Col. Elizabeth Kublek (Julia Ormond) in order to leave flowers on her mother’s grave and flip off the bigwig. Shortly, we meet a couple of the siblings’ peers, taciturn Silas (Hal Cumpston), notorious around the Nebraska U Campus Colony for — dun-dun-dun — “what he did in Omaha,” and Elton (Nicolas Cantu), a smartly-dressed dead ringer for a young Professor Plum.

When not squabbling over their differing opinions of the CR — Iris is all in on the mysterious organization for whom their scientist father Leo is working at an undisclosed location, Hope less skeptical than disdainful — the Bennett sisters check a cabinet in Dad’s study for secret messages that he’s not supposed to be sending them. So far, so good. They also busy themselves adjusting to their substitute guardian, security chief Felix (Nico Tortorella), whose boyfriend Will is in charge of protecting Leo. See what I mean about how densely-plotted this show is? Anyway, as Campus Colony prepares for Monument Day — a kind of Remembering Those We Lost holiday that’s the purported reason for Elizabeth’s visit — the girls receive an upsetting message from their father: “My safety is not assured.” 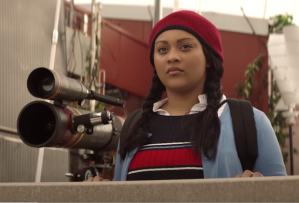 ‘LET’S SEE WHAT DISCOVERIES AWAIT US, SHALL WE?’ | In therapy with her so-terminally-ill-you-shouldn’t-get attached shrink, Iris is encouraged to open up to her sister about “the night the sky fell,” when a plane crash separated her and Leo from his wife and Hope. By and by, we’ll learn that Iris feels guilty about the fact that Hope had to see their mom eaten by empties. Only she hadn’t become an Unhappy Meal — Hope was keeping secret the fact that their mother had actually been shot by a pregnant woman they’d wanted to but hadn’t helped. In turn, Hope, startled by a blast behind her, had accidentally shot the pregnant woman. Got all that?

When the Bennett sibs finally see their dad’s latest message, Elton and Silas just happen to be in the room. To reassure the girls that their secret is safe, Elton reveals one of his own: He often sneaks out of the colony to search for something he lost. When Iris and Hope take the message to Felix, he says that they have no choice but to trust Will to protect Leo. Hope is beyond unsatisfied by that. The CR “are bad people, Iris,” she rails outside, “and they have our dad!” Overhearing, Elizabeth tries to inspire trust by giving the girls a coded map of their father’s location in upstate New York and saying that as much as they miss their father, she misses her daughter, a soldier in the CRM (Fear the Walking Dead’s Isabelle perhaps?). But the risk her offspring is taking makes her brave. They have to be brave “simply to exist now.” 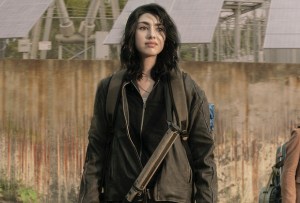 ‘PLUS, I KNOW KARATE’ | After receiving another, even direr message from Pop — “It’s gone bad — don’t tell the Council, don’t tell Felix” — Iris challenges Elizabeth in her Monument Day speech, thoroughly tipping her hand, and insists to her sister that they have to travel the 1,100 miles by foot to help their dad. And sure, why not take Silas and Elton along? The latter’s looking for meaning, and the former doesn’t “want to be what everybody thinks I am here.” No sooner have the kids set off than Felix and fellow soldier Huck (Annet Mahendru) have gone after them. And it looks like the youngsters’ trip will be jolly good fun. Their first night out, Silas stumbles upon the very dinosaur horn for which Elton has been looking all this time. It had been supposed to be a gift for his little sister, but — wait for it — his expectant mother had been killed the night it all went bad! (Just to make sure we have no doubt whatsoever that the deceased is the woman Hope killed, Elton handily has a photo to show us.)

The following day, Iris reports to Hope that, being out in the world and living in the now, for once she hadn’t had the same dream. She’s even game to take on their first walker… sorry, empty. Back at the Campus Colony, the wall has been blown to smithereens, the place is overrun by walkers, and it appears that the CRM has laid waste to… well, everyone who hadn’t hit the road. As Elizabeth surveys the disaster area, wholly unmoved, a soldier informs her that they’ve looked everywhere and couldn’t find “her.” “Good,” she replies. Did she mean one of the Bennetts? Could Huck be her daughter? (Didn’t seem like it when they met.) Anyway, grade the premiere below, then hit the comments with your thoughts. Will you be tuning in again next week?