Following a summer during which a multitude of white people took to the streets in support of Black Lives Matter, The Good Lord Bird arrived Sunday on Showtime to tell the story of perhaps the most notorious white ally in American history: John Brown. The 19th-century abolitionist set out to eradicate slavery by any means, including killing and staging a famous raid on Harpers Ferry Armory in West Virginia in 1859. Though unsuccessful, that attack was regarded as a catalyst for the Civil War.

Ethan Hawke stars as Brown in this limited series, directed by Albert Hughes and adapted from James McBride’s 2013, award-winning novel of the same name. (Hawke is also an executive producer and writer.) Originally set to debut in August, the network pushed the premiere of the dramedy back to provide more context around the series and evaluate the content amid the country’s current reckoning with systemic racism.

Historically, Brown has been a polarizing figure, described as both a hero and an insane terrorist. The episode’s opening scene takes place at Brown’s hanging for treason. The narrator, Henry Shackleford (played by Joshua Caleb Johnson, black-ish), an enslaved person from Kansas, sets up some of the varying opinions on Brown. Then, the story jumps back to Shackleford’s introduction to Brown in 1858. Shackleford was around 11 years old, working alongside his father in a tavern, when Brown walked into his life.

In Episode 1, the characterization, dialogue and overall plot remain true to the book with little alteration. Hawke’s Brown is an erratic and stubborn religious fanatic. Much comedy is derived from his verbose prayers to God. Brown has a habit of sweeping in with good intention and leaving a trail of chaos—and dead bodies—behind. For example, though he rescues Shackleford from slavery, he creates a confrontation with the tavern owner, which results in the accidental death of Shackleford’s father.

Brown also mistakes Shackleford for a girl, makes him wear a dress and nicknames him Little Onion. The show milks Shackleford’s secret as a running gag, but it remains to be seen if and how it will comment on the complex subjects of Black masculinity and gender identity that are immediately conjured by that plot decision. 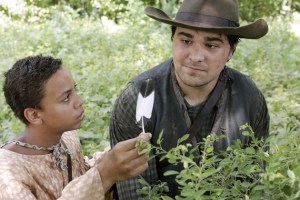 While Shackleford is spared from some tasks because he is thought to be female, Brown empowers him as a member of his ragtag army of abolitionists, some of whom we meet during this episode. Among them are Brown’s sons, including the gentle Frederick (Duke Davis Roberts, Justified), who has a cognitive disability and fascination with rare, “good lord birds.” Bob (Hubert Point-Du Jour, Madam Secretary), an enslaved man who isn’t afraid to speak his mind or bargain his way to freedom—and out of any sort of peril—also joins the crew.

The episode’s comedy is interrupted with acts of violence. In one memorable scene, Brown punishes a supporter of slavery in a particularly gruesome way. Brown, however, is not the most adept general; two of his sons are kidnapped by his enemies. Brown does manage to win a shootout in pursuit of his children, but by the end of the episode, his ambition results in a personal tragedy.

But he is not deterred by the omen.

“I have only a short time left to live,” Brown says. “And I plan on dying fighting for this cause. America will never have peace until we’ve dealt with slavery.”

Alright, it’s your turn: Give The Good Lord Bird premiere a grade in our poll, and then hit the comments to share your verdict.