As Weekend Update drew to a close, Kate McKinnon — whose impersonation of Ginsberg has become the stuff of SNL legend — appeared in character as the Notorious RBG, seated silently as the audience cheered. She then placed her hand on her chest as the show transitioned to a title card with the words “Rest in Power” overlaying the late Justice’s robe and signature glasses.

McKinnon previously eulogized the Ginsburg in a written statement. “For so many of us, Justice Ginsburg was a real-life superhero: a beacon of hope, a warrior for justice, a robed crusader who saved the day time and again,” she wrote. 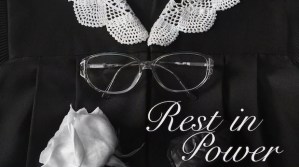 “Playing her on SNL was a profound joy because I could always feel the overwhelming love and gratitude that the audience had for her. It was one of the great honors of my life to meet Justice Ginsburg, to shake her hand, and to thank her for her lifetime of service to this country.”

In addition to the above-mentioned tribute, the SNL premiere featured Jim Carrey’s first appearance as former Vice President Joe Biden, who stood opposite Alec Baldwin’s Donald Trump in a parody of the Sept. 29 presidential debate (watch it here). The Chris Rock-hosted episode also marked the debut of three new featured players: improv vets Lauren Holt, Punkie Johnson and Andrew Dismukes — the latter of whom has been an SNL staff writer since Season 43.

Watch video of SNL‘s RBG tribute below (beginning at the 2:57 mark), then hit the comments with your reactions.