You might know Michelle Buteau from her role as harried orthopedic surgeon Bree Washington on BET+’s First Wives Club. Or you might recognize her as the host of the isolation-filled reality competition The Circle. But in her new Netflix comedy special, Michelle Buteau: Welcome to Buteaupia, Buteau herself offers up a new way to look at her personal brand: “an achievable Beyonce for government workers.”

The joke is one of many high points in the hour-long special, which is now streaming. Other topics covered in Buteau’s set include: Jennifer Lopez (with whom she just finished filming the upcoming Marry Me), Buteau’s twin toddlers (she and husband Gijs van der Most welcomed Hazel and Otis via surrogate in 2019) and TV shows (90-Day Fiancé and The Crown both get name-checked).

Buteau shot Welcome to Buteaupia in New York City’s midtown in 2019; after months of coronavirus lockdowns and social distancing, watching a packed and laughing audience feels rather strange — which was the first topic we covered when TVLine recently chatted with Buteau.

TVLINE | Watching everyone in that room, laughing — it feels like we’re peering at a bygone era. Does it feel as odd to you?
Oh my God. It feels so weird. It feels joyful — it’s definitely a celebration — but it also feels like I’m mourning that time again, because it does feel like sort of a death and that’s the world that we knew once. But I am so glad I got to do it, and I picked March 1 [for the taping] because it was my grandma’s birthday. I’m like, that’s so weird that day came up. Wow, thank you, Grandma, for definitely looking out for your girl on the other side. [Laughs] I really want it to feel like a night out in New York. It probably feels like the last night out, but yeah, I’m so glad I got to do it. I did everything I wanted to do, you know? I said all the things I wanted to say, and I even did some improve, which I love, messing with my audience and my fans.

TVLINE | What venue were you at?
Every comedian is like, “My special has to be a huge theater with maroon curtains and balconies,” and when I started looking at specials and looking at venues I’m like, “Oh, I really want to stand apart and just look like a dirty night at the disco. Like, it’s definitely going to smell like Drakkar and bleached vomit. And you’re just like, “Whoa, this is New York City, I’m cool.” [Laughs] So, we filmed at this place called Sony Hall which was originally The Roxy back in the diz-zay, right in the heart of midtown Manhattan. Whatever state you’re coming from, whatever borough you’re coming from, everybody knows midtown is where Broadway is. And it’s a night out, honey, so wear your good shoes and return them the next day. 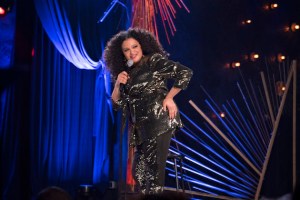 TVLINE | Speaking of which, the gold sequin suit you wear in the special is fabulous. You mention during the show that it’s borrowed. Was it, actually?
I still don’t know! The world shut down and I don’t know where we’re supposed to return it! But shout out to my wardrobe stylist Annie Caruso. I mean, when you meet someone that just sees your body as the drumstick that it is and can fit it like a glove, I’m just like, thank you so much. I told her I really wanted to serve boss Diana Ross, plus-size Beyoncé, you can make my chest look like disco balls. And she was like, “OK.” I’m sure a lot of people are just like, “I want something elegant and timeless,” and I’m like, “Make my body look like a disco ball.” She’s like, “Cool, cool, cool, cool, cool,” and she definitely achieved it, and I’m so excited.

TVLINE | TV comes up a lot in the special. Tell me what you’re watching right now, especially since we’ve all been at home so much.
You know, I’m sorry, but I have to go hard for 90 Day Fiancé, because I do love TV… I love production, I love all the things. And I really love when people are being their most authentic selves. You know, I feel like I also love reality and documentaries… But I love 90 Day Fiancé because I really feel like these dummies just have fallen in love, want to make it work, definitely sometimes want a green card, don’t know what to do, really, now they have to fill out paperwork at the embassy. It’s a mess, and I just love people fighting for their love, but like, with everyone around them.

I also love what Netflix is producing. I mean, besides my stuff, LOL, but Love on the Spectrum is such a fascinating watch. Because when we think about people on the spectrum, we always think about kids, and now they’re growing up and they have to move out at some point, and they also want to be in a relationship, and what happens when they want to do that? I think it’s so important to think about the forgotten.

Also, oh, [Insecure‘s] Issa Rae and [I May Destroy You‘s] Michaela Coel. Any content created by Black women, I lay down for it. I stand up for it. I downward dog for it. 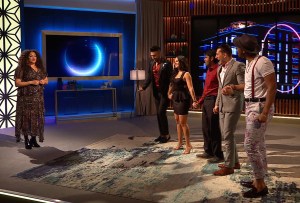 TVLINE | Let’s talk about The Circle, which has been renewed. Are you back for Season 2?
I am back for Season 2. We’re going to be filming it shortly. And I’m so excited, and I love that the show is also COVID-friendly. You know? It is truly about quarantine. And also about what social media says about you, what you look for and how you present yourself. It’s such an amazing project to be a part of, because we have to learn how to exist with social media, you know? I’m always fascinated by the people who are just like, “I hate it, I don’t want it.” But then they’ll get a like and you see their eyes light up. They’re like, “Interesting, I have a connection.” I’m like, “See? That’s how it goes.” 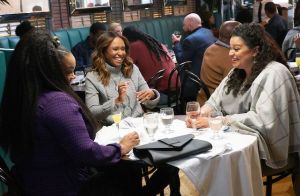 TVLINE | And First Wives Club Season 2? At the end of the first season, Bree and her husband had decided they were going to work on some stuff — have you shot anything yet?
We haven’t shot any Season 2 yet, although it’s been written. We are actually going to get to production later this year and figure out how to do it in a COVID-safe environment obviously, but I love BET’s dedication to making the show happen because it’s been a while. But it’s still popular, it’s streaming, people are still discovering it. It is a damn dream working with Jill Scott and Ryan Michelle Bathe, and just working with Black moms in general because they get stuff done, and they are so talented. I mean, black Hollywood royalty, black music royalty, we’re all royalty. [Laughs]