First, the show debuted the Baby Alien costume, which complete obscures the singer inside (and also forces that person to engage in some basic puppetry). Second — and a much bigger deal, overall — the performer inside the Gremlin costume decided that he was done after one musical number and unmasked himself.

Was this development always part of the plan for the season? I’m sure. Did the judges act as shocked and amazed as though someone was curing cancer, right there in the middle of the LCD stage? Absolutely.

Anyway, read through our quick recap of the Group B performances (most were really, really good!)  to find out who Gremlin was when he removed his furry mask. 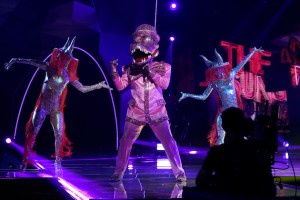 CROCODILE | Crocodile grew up in Hollywood and is most comfortable in water, he told us during his set-up package. And his version of Bon Jovi’s “It’s My Life” made it clear he’s some type of performer, though I’m not 100 percent sold on the boy-band feel that some of the judges got from him. Other clues included: a hotel, a fish in half a pineapple, a rainbow and the Italian flag. (My guess: no clue.)

BABY ALIEN | Host Nick Cannon pointed out that Baby Alien is the first Masked Singer costume with a moving mouth, but I can proudly report that it doesn’t make the get-up any less creepy than the others. Speaking of that mouth: I couldn’t tell if it was bad editing or bad puppetry, but the Totally Not Baby Yoda Why Would You Even Mention That?’s mouth and hand movements sometimes didn’t match up with the lyrics of George’s Michael’s “Faith.” Still, he had a nice voice and certainly wasn’t the night’s weakest performer. Clues included: the Liberty bell, martial arts, a horseshoe and a parade float. (My guess: I’ve got nothing yet.) 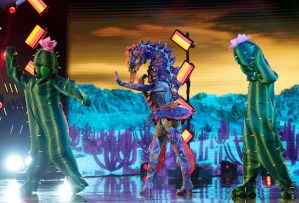 SEAHORSE | “That is the sassiest seahorse I have ever seen,” judge Nicole Scherzinger said when Seahorse slinked out onto the stage, and I’d have to agree with her. We’ll get to the clues in a second, but WOW could the woman inside this costume sing or what? She killed Rihanna’s “Only Girl (In the World),” breathy at first but belting with gusto when the time was right. She had Mary J. Blige vibes (though not quite as rich) when she got to the chorus, and I’m sure I’ve heard that voice before. Clues included: Poodles, tea, a hog with warts (Hogwarts?), Emotion Ocean and tea. (My guess: I do not know and am feeling like I’m failing Episode 2.)

WHATCHAMACALLIT | “I can dance with the stars, surf candy bars, buzz with the bees and swing from the keys,” the gargantuan, shaggy contestant said in his set-up package. And he’s a solid, steady rapper who got through Skee-Lo’s “I Wish” without tripping over any of the words. Clues also included: shrimp, khakis, a triangle and the number 4.0.  (My guess: a professional athlete who also competed on Dancing With the Stars.) 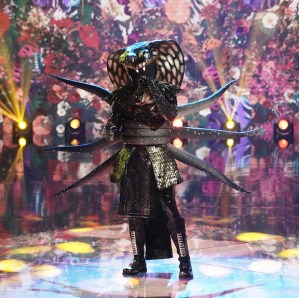 SERPENT | It’s folly to harp too much on the rationale — or lack thereof — behind costumes… but why does Serpent have six tails? Anyway, the big snake performed a slow-jam version of The Proclaimers’ “I’m Gonna Be (500 Miles)” with a ton of control and a very warm tone to his very good voice. He isn’t John Legend, like judge Jenny McCarthy Wahlberg thought, but he’s John Legend-ish. Clues: a banana, a map of the Caribbean, a book titled How to Dig Yourself Out of Debt, musicology and medicine. (My guess: I don’t know… and I definitely didn’t just Google “singers who sound like John Legend.”)

GREMLIN | Aside from his very soft-looking costume, everything about Gremlin — from the set-up package talking about his “checkered past” to his painful vocals on Ben E. King’s “Stand By Me” — was rough. And did he forget the words a couple of times? That, I can forgive, given that he sounded real old. (My guess: no idea.)

THE UNMASKING | During his post-performance chat with the judges, Gremlin announced that he was too hot inside his costume and took off his own mask… revealing that he was The Wrestler star Mickey Rourke.

Now it’s your turn. Hit the comments with your early guesses about Group B’s identities!