From a young age, most of us are taught to try to look past people’s appearances in order to discern their true natures. I Can See Your Voice, Fox’s newest game show, says, “Eh, don’t bother.”

The hour-long series premiered Wednesday following The Masked Singer. Hosted by Masked judge Ken Jeong, I Can See Your Voice tasks contestants with trying to figure out whether or not people are good singers, based on what they look like (and a few other clues). The contestants are aided by a panel of recognizable faces; in the premiere, that panel was populated by Fashion Police‘s Kelly Osbourne, Curb Your Enthusiasm‘s Cheryl Hines, The Real‘s Adrienne Houghton, Arsenio Hall and pop singer Nick Lachey.

The six singers are identified by generic names, such as “football player,” “counselor” or “rock climber.” Some of them are actually professional musicians. “However, some of them are fakers with voices so bad that your ears will hate you forever, and that is a medical fact,” Dr. Ken Jeong informed the audience at the top of the premiere. (And yes, “Dr. Ken Jeong” is how he was announced.)

The goal is for the contestant to pick out all of the bad singers in the rounds that lead up to the final. For every successful guess, the contestant gets $10,000. Then, ahead of the last round, the contestant can risk everything they’ve won for a chance at $100,000. 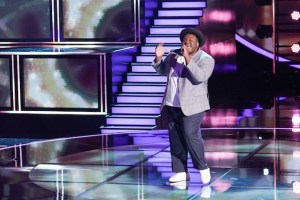 The premiere’s contestant was Shannon from Chandler, Ariz. Her rounds included lip sync challenges (in which the singers mouth the words to songs they may or may not have previously recorded), getting a glimpse at the photos and videos on a singer’s phone (aka watching a carefully produced video package), watching footage of a singer in the studio (where the voices are incredibly distorted) and hurling rapid-fire questions at a singer to glean whether or not they’re the real deal.

A singer referred to as “stylist” was the last one standing when Shannon got to her final round, and she decided to risk the $30,000 she’d won for a chance at $100k. As it turns out, “stylist” could sing. So Shannon took home the grand prize, and “stylist” sang a duet with Lachey to close out the episode.

Now it’s your turn. What did you think of I Can See Your Voice‘s premiere? Grade the episode via the poll below, then hit the comments with your thoughts!