THE PERFORMANCE | From the moment Mother and Father touched down on Kepler-22b, Amanda Collin has inhabited her android alter ego completely. Much of the performance comes from, yes, the Danish actress’ lithe figure, which when seemingly “dipped” in green latex looks almost alien.

But above and beyond that, Collin has delivered a distinct take on the stereotypical, near-emotionless android character we know all too well from films such as Raised by Wolves EP Ridley Scott’s own Alien and Blade Runner. Mother, we see through Collin’s performance, is trying to be more, to act like, well, a mother. (When she isn’t killing people with a blood-splattering sci-fi weapon for the ages.)

In the first of this week’s two episodes, Collin took us on quite a ride, starting with Mother’s discovery of a drawing done in the style of the deceased, young Tally — and which depicted her illicit, virtual kiss with creator Campion Sturges. The way an on-the-edge Mother accused Father of baiting her with the spooky drawing, you almost wished he’d lie and cop to it. Because when he made clear he had no hand it, the double-impossibility of its existence sent a glitchy Mother careening, soaring away to her pod.

Once plugged back in, Mother unexpectedly encountered a version of Sturges. “You’ve infected my systems. I’m… malfunctioning,” she theorized, and Collin’s delivery almost made you feel sorry for the ‘droid. After Sturges coldly observed that Mother’s human children “have no future,” that “their lives are only dying” whereas she is “eternal,” he once again urged her to confess her one, true desire. “I want… you,” she uttered, falling into a kiss, an embrace and much more. And even in the funky, artsy love scene that followed, Collin effectively communicated a rapture that was unknown to Mother, as she felt the most intense of human desires for the first time. 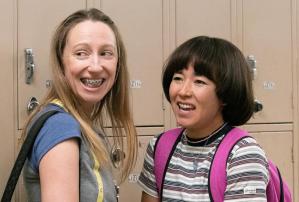 HONORABLE MENTION | Hulu’s outrageously funny teen comedy PEN15 is back, and Anna Konkle and Maya Erskine proved once again that they’re one of TV’s top comedic duos. The thirtysomething stars are utterly convincing playing 13-year-old outcasts among a supporting cast of real teens — we honestly forget at times that they’re not actual teens, too — and Season 2 has added a streak of melancholy to Anna and Maya’s usual goofy antics. They both peaked in Episode 6, with Maya scoring the coveted lead role in the school play (Erskine had a fantasy monologue here as a bitter, middle-aged woman that underlined what an incredible transformation Maya is for her) and Anna embracing the role of stage manager, with Konkle trading Anna’s usual meekness for arrogant authority. If we’re handing out class superlatives, Konkle and Erskine get our vote for “best best friends” for sure. 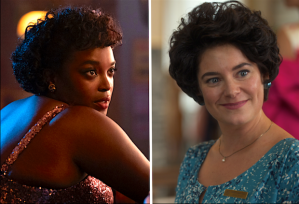 HONORABLE MENTION | Lovecraft Country went full Twilight Zone this week, with Wunmi Mosaku‘s Ruby experiencing life as a white woman in the body of “Hillary,” played by Jamie Neumann. It was a stunning dual performance, with Ruby relishing her newfound power and confidence inside her white skin. (Neumann’s eyes flared with wonder and excitement as Ruby happily embraced her privilege.) Mosaku also got her chance to shine when Ruby shed her white skin and took vicious revenge on a sleazy department store manager, funneling a lifetime of frustration into a graphic act of violence. Ruby has been one of Lovecraft Country‘s most fascinating characters so far, and Mosaku and Neumann teamed up to let us get to know her a little better… inside and out.