A lot went down in Tuesday’s The Haves and the Have Nots, from a seismic power shift in the Malone family to Candace having a word — yes, just one — with her father. But the biggest shock of the hour had to be what went on in Veronica’s bedroom. With whom did she picture herself, and what “sweet nothing” did he whisper that damn near made us do a spit take? Read on and find out. 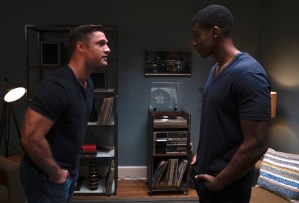 ‘RELAX… BUT NOT TOO MUCH’ | As “Someone Special” began, right where “Fine Together” left off, Derrick insisted that he was just at the Cryers’ to board up the door, per Jim’s instructions, and pleaded with Hanna to inform the police who he was. “Do you really wanna talk about who you are?” she asked. She was having none of it this week — maybe even less than none. After the police ascertained Derrick’s identity with no help whatsoever from Hanna, David came by, as Jim had asked him to. She wasn’t having any of it from him, either. “Do you not see me ignoring you?” she snapped. Hell no, she wasn’t telling David diddly to tell Jim, she answered only to Katheryn. By the time she drove away, I’m pretty sure that the judge had suffered burns that were worse than the ones on his back. “Damn,” he muttered. Agreed. Meanwhile, Benny let Candace into their mother’s place, then went to the Iron Bone so that Mitch could mislead him about Derrick. Because there’s just no hour that’s too late for this crew to be out and about; sleep is for characters on lesser shows!

Back at the jailhouse, Vinny was told yet again that only a judge could release Mama Rose. “Let me ask you something,” he told Officer Morris’ replacement. “Are you suicidal?” Luckily, Officer Miller intervened in time to save the lobby from becoming the scene of a mass “suicide.” When he subsequently let slip to the queenpin that he hadn’t filled in the chief about her overnight accommodations, she was angrier than the chief would’ve been to get a late-night call. Once she set him off to get her freed, she went right back to trading barbs with Katheryn and hit upon a wonderful, awful idea: The rich bitch should have to share her cell with a member of the family of the little girl that Wyatt had killed! Oh, and Wyatt was dead, she added. (If only!) Fazed, but only marginally, Katheryn vowed that if anything had happened to Wyatt, she’d bring Mama Rose’s reign to a screeching halt.

‘I’M HERE TO SEE MY MAN’ | At the Iron Bone, Mitch tried to stifle his laughter over Sandy’s freak-out in the wake of Officer Morris’ murder. It really hadn’t occurred to the racist D-bag that being a mobster wasn’t all black clothes and free drinks. At Madison’s, Justin was still standing around in the hallway when Jeffrey arrived. “I can be better,” said Justin in one breath and “I don’t know if I’m gonna make it” in the next. He really was sad. Hot but sad. Once Jeffrey left him in the hall, he and Madison agreed that yep, Justin was pitiable. But he was also “something bad waiting to happen.” That being the case, Jeffrey was going to stay the night and sleep on the couch. “You can protect me in the bed,” noted Madison. Point taken, off they went. Off his encounter with Hanna, David brought Jim up to speed. Katheryn’s housekeeper “can be a bit of a bitch,” said David, clearly unaware that that’s sacrilege. No duh, replied Jim, who instead of calling a detective wanted his buddy to find Wyatt. At that point, I’m pretty sure David was regretting that he hadn’t just turned off his phone and shagged Alissa.

Next thing we knew… wait, what?!? David was getting it on with Veronica. They were professing their love and apologizing for all of their s–t and… spooning? W the actual F? Then he whispered in her ear words that made me wonder if I’d accidentally dropped acid. “Did I tell you I was in love with Hanna?” he said. Mind blown. At that, Veronica woke up alone and did her best to cry (it doesn’t come naturally to a psycho like her); at the same time, given the animosity between Hanna and David, I had to wonder… would Tyler Perry go there with David and Hanna?!? At the Iron Bone, Mitch BS’d Benny about the identity of Hanna’s rapist and, despite the implausibility of his story, closed the case thusly: “Listen, man, my family gets it right.” Well, OK, then! When Mama Rose rolled in with Vinny & Co., she asked Mitch if he was joining “the family.” Still no, Grandma, he said the way normal people might tell their nanas that they haven’t met a nice girl yet. That being the case, he had to scram, because she had business to discuss with Vinny. For starters, she was moving to Florida and leaving him in charge. Also, she wanted Wyatt abducted and held until Katheryn forked over $1M. Also, she needed a damn nap. 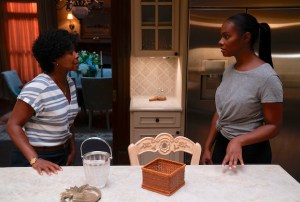 ‘IT’S A HELLUVA START-OVER’ | Next up was arguably one my favorite scenes ever, if only because the drug dealer from whom Wyatt tried to buy heroin with his mother’s jewelry said “bro,” I kid you not, every third word. It may have even been every other word, I lost track. But it was incidental and awesome and hilarious. Eventually, Wyatt scored a small amount of drugs, but as he needed more, he’d have to go to the Iron Bone; that was the only place that traded smack for baubles. “I can’t go there,” he protested. And yet, he soon would. Back at Hanna’s, Candace told Benny that she’d probably catch a flight to Atlanta. (Good luck with that, thanks to Landon.) As they left, they ran into Derrick, who not-at-all-suspiciously pleaded for a moment alone with his daughter. For the purpose of keeping this train rolling along, Benny stepped aside, allowing Derrick to explain that he’d been a teenage junkie when he raped Hanna. Was there anything that Candace wanted to say to him? Mm-hmm. “Goodbye.” Classic Candace.

As the episode drew to a close, Vinny did his best to be understanding of Sandy’s reaction to his first up-close and personal murder. But there was gonna be more where that came from, Vinny warned. Now that he was in charge, “We’re gonna turn up the heat.” In particular on Wyatt and the Cryers. Vinny was no math whiz, but it still struck him as odd that Mama Rose thought he’d gotten $75K not to kill the bastard when he’d only gotten $50K. He also had another task to attend to: Mama Rose wanted one of the Castillo kid’s relatives moved into Katheryn’s cell. Just then, who should walk in but Wyatt, flashing jewelry like a one-man diamond district. “You gotta be kidding me,” said Vinny. Yeah, no — Wyatt’s just. That. Dumb. So, what did you think of “Someone Special”? Do you think the show would really flirt with a David/Hanna pairing? Could you even imagine it?!?