Warning: The following contains spoilers for Tuesday’s midseason premiere of The Haves and the Have Nots. If you’d rather watch first, read later, do what Veronica tells so many of her boy toys to do and amscray!

Seriously, though, if The Haves and the Have Nots had stuffed anything more into its two-episode return, the midseason premiere would’ve burst at the seams. We got father/son “bonding” at gunpoint, a supervillain’s arrest, too many idle threats to catalog, a tryst that turned out to be, er, no big deal, and by the time we were done, a death that we never saw coming (but probably should’ve). Are you comfy? Good, ’cause it’s gonna be a long and bumpy recap! Here we go… 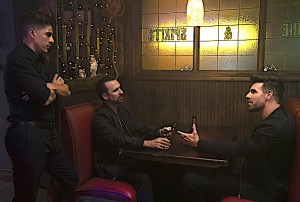 ‘I WILL HAVE YOU RUN OVER BY THE BIGGEST, PINKEST CAR I CAN FIND!’ | As “Power of Attorney” began, Katheryn wailed at the prison guards as they tended to Wyatt post-suicide attempt. Surprisingly, that did nothing to help (and if they said whether he was dead or alive, we couldn’t hear it over his mother’s cries). Elsewhere, while Candace did her damnedest to dissuade Benny from talking to Hanna about Derrick — got all that? — their mom showed up at the Iron Bone to speak with the Malones. Luckily, she’d just missed the Mob family in question. After Sandy had been served with a restraining order by his ex Rianna, he and Uncle Vinny had been called away to bail out Mama Rose, who’d been arrested for DUI. Left to run the joint, Mitch immediately phoned Benny and Candace to give them the 411 on Hanna’s dangerous whereabouts.

Meanwhile, despite the way that Landon treats him like he’s Veep’s Jonah Ryan, Oliver shared that he’d learned that Candace had (a) bought a pregnancy test, (b) been hanging around Mitch and (c) booked a flight to New York. Immediately, Landon got the president’s sometime lover added to the no-fly list. Afterwards, Landon thanked Oliver by threatening him. “I hope you’re finding out as much [about me] as I am about you.” Yeah, this is a healthy relationship. At David’s place, the judge beat a hasty retreat when Jeffrey and Madison came home drunk and horny. How hasty a retreat was it? So hasty that he left in his pajama pants, and rather than go back inside, borrowed his bodyguard’s car. As he made tracks, Madison insisted that Jeffrey strip in the foyer as “a lesson in you getting comfortable.” In no time, he was so comfortable that he was suggesting when they went for round two, they should do it at his mother’s house! 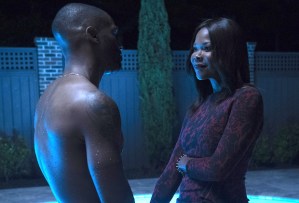 ‘YOU KNOW I’M ALMOST NAKED IN HERE?’ | Before dinner — ’cause one never schemes on a full stomach — John and Don, apparently Katheryn’s accountants (?), came up with a brilliant idea to funnel $5M from her accounts into their new venture. It was foolproof, they figured. She’d be way too distracted by stuff like, you know, being behind bars. One possible problem: Marty, who wanted to see them at the office immediately. While all that was going on, Justin was paid a “delightful” visit by his brother, Tanner, who was quick to notice his wall of Jeffrey pictures. (Every stalker is required to have such a wall; it’s in the bylaws.) So help him, Tanner said, if Justin was doing “perverse” things like he had as a kid, he’d bring back their brothers and beat him bloodier than they had the last time. Well, no wonder Justin has issues! At Veronica’s, the queen bitch was wandering around, drinking, when she noticed Rodell in her pool. Rather than join him, she threatened to electrocute him. At least she warmed to him — maybe “heated” is the better word — when he dropped to his knees to demonstrate why she should let him stick around.

When Candace and Benny arrived at the Iron Bone, desperate to keep their mother from saying a word to the Malones, Hanna put on a demonstration of stubbornness that would impress a mule. Finally, Candace decided to call in Milo. Go home, she told Benny. “It’s gonna get ugly. They’re gonna put her out.” Come again?!? In the end, Candace gave her brother five more minutes to extricate Hanna from the premises. And as episode No. 1 drew to a close, Jim was visited at the hospital by Jimmy. Who? “You’re my father, a–hole,” the younger man spat. “I’m one of Celine’s sons!” Since Jim made it abundantly clear that he couldn’t possibly care less, Jimmy drew a gun and aimed it at the rat bastard!

‘I AM A DESPICABLE HUMAN BEING’ | Picking up where the midseason premiere left off, “One Way or Another” began with Jim pleading for his life and insisting that he didn’t know why he was the useless turd that he is. Jimmy had an idea, though: It was because his father was a sociopath, “an evil man who thinks that he’s a stable genius.” Ha. After revealing that his gun was as fake as Jim, Jimmy paid a visit to Wyatt’s room. How he happened to know that his half brother was there, I have no idea. Does Celine send out an e-blast whenever a Cryer checks in? Anyway, proving himself to be an absolute chip off the old block, Wyatt greeted Jimmy thusly: “Oh, that’s right, you’re the half-breed.” Charmed. They huffed and puffed at each other a bit — Wyatt had something Jimmy never would (privilege), and Jimmy had something Wyatt never would (a mother who loved him) — and that was that. Good talk, fellas.

Meanwhile, unaware that Wyatt was right as rain, Katheryn continued wailing behind bars, much to the annoyance of Mama Rose (and just about everyone within earshot; they would’ve tipped way better if she’d just taken their requests for “Anything but more of this!”). The Cryer matriarch adjusted her attitude once she realized the identity of the old lady with the La-Z-Boy in her cell, but by then, it was too late. Besides, Wyatt had stabbed Vinny. No way in hell were Katheryn and Mama Rose destined to be gal pals. Over at David’s place, Jeffrey and Madison appeared to be having a contest to see whose abs could pop more. (For my money, a draw.) When David returned, he found waiting for him Alissa, an old friend of Erica’s. Another hooker, Alissa played David a video of Erica apologizing for duping him and… well, we didn’t find out what else she had to say, because David didn’t want to watch the whole thing. Though he was done with Alissa, she wasn’t done with him. She pleaded with him to let her inside, and when he wouldn’t, she stripped down to her skivvies and performed an interpretive dance in his fountain. 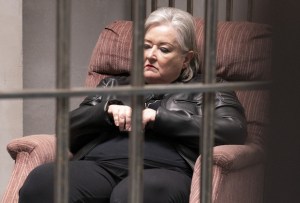 ‘HELL, ANYBODY CAN RUN FOR PRESIDENT IN THIS COUNTRY’ | During a brief powwow with Laura and Samuel, Derrick became suspicious when he learned that Veronica had given her new maid her clothes. Be careful, he warned. “She got an agenda.” Speaking of agendas, John and Don, apparently the Mr. Wint and Mr. Kidd of the show (?), were chagrined to learn from Marty that Katheryn had given Hanna power of attorney. Since they’d already funned $5M from Mrs. Cryer’s account — between the restaurant and the office? — they were fudged, they feared. Or were they? If they just let things ride, they could just blame it all on the maid if a discrepancy was uncovered. Back at the Iron Bone, Candace had Benny beat a hasty retreat so that he didn’t have to watch their mother get dragged out. Elsewhere, Veronica kicked Rodell out of bed mid-coitus. “I know women with bigger penises than that,” she snarked.

Later, after Benny discovered that Veronica had once represented Derrick, he phoned her and, instead of information, received an invitation to come over — with condoms. “Bring the small ones you use,” she added. If that woman ever crosses paths with a masochist, she’s set for life sex-wise. At the same time, Oliver was scoring drugs from the henchman who’s also working for Jim and prattling on about how his daddy’s going to run for president. Finally, the Malones arrived at the jailhouse and were apoplectic to learn from Mama Rose’s baby-faced arresting officer that she’d be staying the night. The Malones being the Malones, they covered the security camera, and Vinny shot the poor kid in the head! So, guess you could say instead of going out with a bang, The Haves and the Have Nots came in with one! What did you think of the midseason premiere? Grade it in the poll below, then hit the comments with your observations.