Ahead of The View‘s Season 24 premiere this Tuesday, Sept. 8, ABC’s daytime talker sent out a list of “Hot Topics” (read: fun facts). Because while it has been great sport over the years to focus on the show’s sometimes noisy goings and comings, on a much lighter note it is also interesting to recall….

♦ The title for the daytime series’ original pilot was The View From Here.

The View: Every Panelist Who Has Left Over the Last 25 Seasons

♦ The View originally taped in the space that had been home to the cancelled ABC soap opera The City. (Its set from Season 18 on, meanwhile, once upon a time had been horse stables, and as a TV studio it hosted one of the Kennedy/Nixon debates. 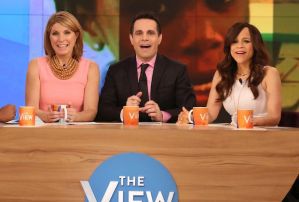 ♦ The guest to put in the most appearances over the years, with a total of 132 visits, is… Mario Cantone. (Last season’s most frequent guest, meanwhile, was Senator and onetime presidential candidate Amy Klobuchar, who swung by four times.)

♦ Excluuuusive fun fact! In a July 2019 poll of TVLine readers that asked you to pick your “dream team” of five co-hosts, the top vote-getters were Joy Behar (with 15% of the votes), Whoopi Goldberg (14%), Meredith Vieira (9%), Sunny Hostin (8%) and Ana Navarro (8%). Dwelling in the bottom two spots were Michelle Collins and Debbie Matenopoulos, each of whom netted less than 1% of the votes.

♦ Four ladies have welcomed (or will welcome) the birth of at least one of their children while serving as a co-host on The View: Hasselbeck, Haines, Huntsman and soon-to-be mom McCain. 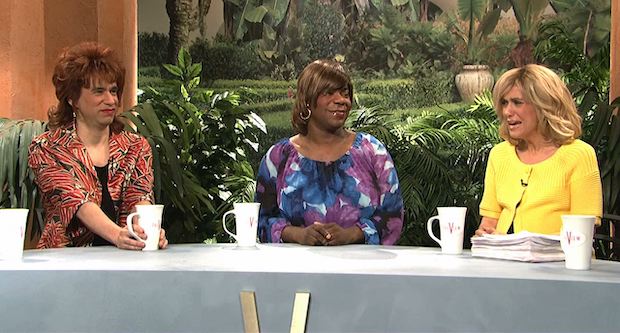 ♦ Saturday Night Live has spoofed the show a total of 13 times over the years.

♦ Looking ahead, the new season’s very first guest on Tuesday will be former White House spokesperson Sarah Huckabee Sanders (promoting her new book Speaking for Myself). On Wednesday, the First Lady’s former friend Stephanie Winston Wolkoff will discuss her tell-all, Melania and Me. Thursday brings Jane Fonda (author of What Can I Do?) and GMA co-anchor Robin Roberts, while on Friday it’s “The Political View” with former Ohio Governor John Kasich, plus Eva Longoria.