Because not only does Lil Murda slay his performance during The Pynk’s final night of business, but the evening ends with an actual murder in the Paradise Room, of all places.

The episode picks up where the previous one left off: With Hailey alone with her abusive ex-man, who menacingly wonders what she’s done with the money she stole from him. She claims to have put it in a bank, but he doesn’t believe her. She points out that there are cameras everywhere in the club, so he makes her start dancing so no one gets suspicious. They talk about how she wasn’t his wife, but she did take a whole lot of money from him because he was toxic and only devoted to his gang.

While that’s happening, Mercedes’ neighbor sends her a message (aka the Missing poster of Hailey), and she recognizes the ring on the hand resting on Hailey’s shoulder in the corner of the photo: It’s the same one worn by the customer who asked for Hailey earlier. When Uncle Clifford, Diamond and Big L all are MIA, Mercedes takes matters into her own, pole-calloused hands. She grabs a bottle of Champagne and enters the Paradise Room, telling Montavious that bottle service and an extra dancer are all part of the package. After a little while, he hands Mercedes a stack and tells her to leave. “If Hailey wants me to leave, I leave,” she says pointedly. 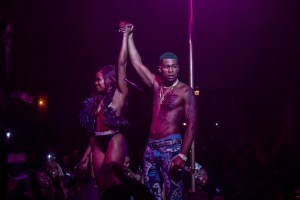 Meanwhile, out in the club, Lil Murda gets over his stagefright and nails his performance, with Keyshawn and a bunch of other dancers doing their thing in the background. Afterward, the music producer guy who’s there to see Murda seems a lot more interested in representing Miss Missisippi. And when he casually drops some homophobic slurs and makes a point of saying how he needs an “authentic” artist on his roster, Lil Murda is cold to and dismissive of Uncle Clifford, who is hurt by her man’s abrupt change in demeanor.

Later, in the office, Lil Murda knows he messed up. “You got exactly what you wanted, huh?” Uncle Clifford asks, unmoved by Lil Murda’s tears and excuse that he was “just flexin’.” Then she throws the younger man out of the office, saying: “You Lil’ Murda now, not Lamarcus. What a privilege it was getting to know him. What a joy. Because Lamarcus was ready. This Lil Murda character, that’s the face you show me first. I don’t know about him.”

Back in the Paradise Room, things devolve quickly. Mercedes smashes the bottle and uses it to try to stab Montavious, but he quickly overpowers her. Then Hailey runs to get his money, which she says is in the club. At the same time, after Derrick is his usual terrible and abusive self to Keyshawn, Diamond follows him into the men’s room and starts a fight. Their tussle eventually spills into the club, and when Diamond’s gun goes off, the crowd flees.

While all of that ruckus is happening, Hailey has returned with Montavious’ money. We learn that her daughter — named Autumn — wasn’t his, but he was in the girl’s life. And she drowned in the flood “while I was trying to run away from you,” Hailey says.

Eventually, Uncle Clifford becomes aware of what’s going down in the Paradise Room, so she grabs a gun and runs in there. Diamond eventually follows, but he comes up short when three bullets whiz through the closed door… and then a puddle of blood starts to seep out beneath it.

The next thing we know, Uncle Clifford and her grandma are dressed all in black and getting ready to go to a funeral. But the “funeral” is actually the public auction for The Pynk, which is attended by the dancers, Andre, his wife and the mayor. Andre thinks he’ll be able to just sweep up the club and its land, but then Hailey enters and WAY outbids him. She eventually wins the bidding war, and the mayor fumes as the dancers celebrate and Hailey pays for the property with Montavious’ cash. 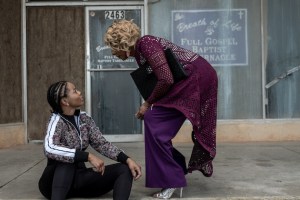 Mercedes isn’t feeling as great. She goes to her mother’s church to beg forgiveness from God and Patrice, but the latter reminds her that she’s “dead” to her daughter, and turns her back on her. So Mercedes goes to the club, where Uncle Clifford, her grandma and Hailey are having a drink. “Is it took care of?” she asks Clifford, which seems to indicate that she killed Montavious but won’t face charges. “It’s took care of,” Clifford assures her. “Good,” Hailey interjects, “because it’s opening time at The Pynk.”

Now it’s your turn. What did you think of the finale? Grade it — and P-Valley‘s first season on the whole — via the polls below, then hit the comments to flesh out your thoughts.