If you’ve ever wondered, “How would Friday Night Lights‘ Coach and Mrs. Coach handle it if one of them were an astronaut on an extended mission to Mars?,” Netflix’s Away just might be the show for you.

The drama, which premiered Friday and which counts FNL boss Jason Katims among its executive producers, follows Commander Emma Green (played by Oscar winner Hilary Swank) and her international crew as they begin a three-year trip to the red planet. The series is set in the near future, so this adventure is the first of its kind for NASA. Consequently, there is a lot of pressure on Emma and her four-person team, which consists of Misha from Russia (Mark Ivanir, Homeland), Kwesi from Ghana/England (Ato Essandoh, Chicago Med), Lu from China (Vivian Wu, The Pillow Book) and Ram (Ray Panthaki, EastEnders). 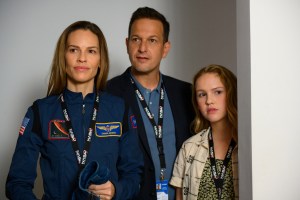 The series opens as Green & Co. are at a base on the moon, preparing to leave for the eight-month trip to Mars. An incident on the first leg of the trip is in question: There was nearly a fiery disaster aboard the space ship, and Lu and Misha think that Emma didn’t act in a manner befitting a commander. “She froze, simple as that,” Misha says, during a NASA debrief via teleconference. Kwesi thinks otherwise, saying that Emma’s actions saved his life.

On the ground at ground control, representatives from the other countries pressure the United States to replace Emma as the team leader. But her husband, Matt (Josh Charles, The Good Wife), is a NASA engineer who passionately argues that his wife is more than ready to fulfill her duty. As the episode progresses, we learn that Matt was training to be an astronaut, as well, but a medical condition permanently grounded him. So he’s the one staying on Earth to take care of their teenage daughter, Alexis (Talitha Eliana Bateman, Love, Simon). 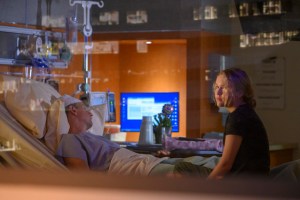 Just before the Mars mission, Matt collapses while making dinner; at the hospital, Alexis learns her dad had a stroke. “You’re not still going, are you?” the girl asks Emma when they talk on the phone. A conflicted Emma worries as Matt is rolled into surgery; she tells NASA that if Matt dies, she’s coming home and an alternate will have to take her place. But he survives, and when Emma is on the phone with Alexis afterward, Matt musters up the strength to tell his wife, “I need you to go.” And this time, Alexis tearfully agrees. 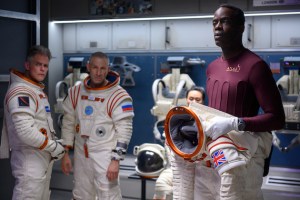 So Emma and her crew don their spacesuits and go outside, addressing the world via a video from the surface of the moon. Then, with Misha and Lu shooting Emma daggers every chance they get, the crew boards the ship and blasts off for the eight-month voyage to Mars.