Netflix’s new astronaut series Away has vertiginous spacewalks, high-stakes international discord and peril that plays out millions of miles from human civilization.

But executive producer Jessica Goldberg says something far less flashy had her doing a zero-gravity dance of joy when she first heard about the project.

“It was the most honest depiction of a working mom that I’ve ever seen,” says Goldberg (The Path), who serves as showrunner on the series. (Jason Katims also is among the drama’s EPs.) “It’s sort of the working mother to the nth degree, but you know what? It captured the way you can love your child and your work, the pull between those two things.”

In the show, Hilary Swank’s Emma Green is commander of the first manned mission to Mars, a trip that lasts three years and takes Emma very far from her husband (played by The Good Wife‘s Josh Charles) and teen daughter.

“I just felt like wow, it’s so rare to see women that are so smart and so love their work and also are so dedicated to their family, and that really moved me,” Goldberg recalls.

Away‘s 10-episode first season begins streaming Friday. In the meantime, read on for Goldberg’s thoughts on the vagaries of wire work, the philosophy of traveling among the stars and the importance of having someone you want to come home to.

TVLINE | The series is set in the near-future — are we talking five years? Ten?
To me, even though it’s in the near-future, it’s sort of like a parallel universe in which this kind of thing could happen. The thing that feels futuristic about the show is the idea of the world working together on something like this. But all the technology they have is technology that NASA has, [the Jet Propulsion Lab] has. We call it the “near-future” just because it will probably take that long to go to Mars, but in my brain I sort of feel like,  just like imagine this could happen today.

TVLINE | Chris Jones’ Esquire story about Scott Kelly’s 2015 year-long space mission — the longest in American history — served as a jumping-off point for the show. There are a lot of details from that piece woven into Away. How closely did you want to hew to what he’d written?
So Jason [Katims], who we’ve all worked with, for a while gave Andrew [Hinderaker, Away creator] this article. He just had this beautiful, unique take on basically that sort of Scott Kelly piece, like what happens when his sister-in-law was shot while he’s in space. [Editor’s note: Kelly’s brother is Mark Kelly, a retired astronaut who is married to former Arizona Rep. Gabby Giffords. Giffords was shot during a mass shooting that happened during Scott Kelly’s mission.]  If you’ve read the article, you know that there’s also this beautiful piece online where [Scott Kelly] speaks to Earth and he says, “This is the best of humanity, what we’re doing. What happened today is the worst.” I mean, that just makes me cry every time.

And there was that other idea in the article of the people that we send to the moon, or to Mars, have to be people who have to have tethers to Earth. Because we need them to come home.

So that was always in the DNA of the show and so much a part of everything we talked about. And then Chris ended up being in our writers’ room, so I feel like the show is infused with his voice and his philosophical look at what space travel is. We try to have a lot of action, but it also really captures the larger philosophical questions of space travel.

TVLINE | In the anti-gravity scenes, the actors are strung up on wires. How was that, from a production angle? So much wire work, I imagine, can really slow things down.
Well, we did a whole boot camp where they came and we had them work on wires for a week before we even started, and then we had this amazing stunt team who would work everything out. And then we had Mike Massimino, who’s an astronaut who came down and spoke to them about it. It was a very large part of it, but the problem we had as creators was, how do you do dialogue on wires? How do you have these deeply emotional scenes, and then also how do you make your budget? [Laughs]  Because the wire work takes so long.

So we ended up putting gravity in part of the space ship… I’d never done anything with special effects, really, so that was a real learning curve. 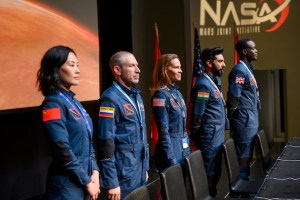 TVLINE | In the premiere, some of Emma’s crew doubt whether she has what it takes to command this kind of a mission. Do you think there are any kernels of truth to their criticism?
I think so. We’d research with other astronauts. [Going on a space mission] is like going to war. These are the people that are going to have to have the instincts that will save your back in a war zone. So anything can happen up there, and I think if you feel that somebody is too impulsive, that could be something that might frighten you.

TVLINE | Away exists in two main pieces: Emma and the crew in space, and Emma’s husband and daughter back on Earth. Talk to me about how you figured out how to best go back and forth between the show’s two spheres.
Yeah. I think it goes back to that original thing from Chris’s article of realizing that the people on Earth were these people’s tethers to come home. Without them, [there’s less] will to return, because it’s so easy to give up up there… The other thing I just always loved about this show was the opportunity to tell these epic stories of heroism, and then these small moments of the human condition on Earth and how they kind of mirror each other.

So somehow they ended up you know, working together. And as writers, we allowed ourselves to be okay with these smaller moments.

TVLINE | Were there any spaces tropes you wanted to tweak or avoid altogether or lean into real hard?
Oh, that’s such a great question. Well, we definitely knew we needed the big space walk in Episode two, that story. We did need to lean into some of the expectations of space, but then we were like, “What would really happen if your water system broke? That would be death.”

So we definitely felt the need to lean into some of the big space stories, but then also maybe focus on some of these smaller stories that we haven’t seen. And also with this show, we don’t have any aliens. [Laughs] Everything is grounded in “this could be real,” so there’s no aliens.