The Haves and the Have Nots’ Benny said it for all of us in Tuesday’s episode when he suggested that Alissa “think about not being so thirsty all the time.” They’d only known each other for, like, an hour, tops, and still, he’d nailed it. Before they met, Erica’s old pal enticed David to let her into his house, at which point she suggested a threesome with his security guard, Leo. Instead, David, thinking that the hooker had been sent by Veronica, took her to his ex’s place… where they walked in on Benny coming thisclose to sexually prying information about Derrick from his former lover. As you can imagine, hilarity ensued. Read on, and we’ll go over not only that scene but all of the rest of the goings-on in “Fine Together.”

‘I DON’T THINK I LIKE YOU’ | Picking up where the season premiere left off, the hour began with an Officer Miller backing up Vinny’s ridiculous story about Officer Morris committing suicide right in front of the Malones. While the cops tended to their fallen comrade, Vinny yelled about his mother being locked up as if the police weren’t kinda preoccupied at that moment with their attempts to keep some of Officer Morris’ blood in his body. Having heard the gunshot from lockup, Mama Rose correctly guessed that her boys had arrived, then went back to antagonizing Katheryn, who thankfully had ceased wailing over Wyatt. Speaking of whom, how, Mama Rose wanted to know, had Katheryn raised such a bad seed even with all of the money and opportunities at her disposal? When Katheryn reminded the Mob queen that the Cryers had paid $75K to call off the hit on her son, Mama Rose decided that now she wanted $1M. Sadly, she did not say it like Dr. Evil from Austin Powers.

At the hospital, Wyatt continued to try to beat his record for most poor choices made in a single day by picking the lock on the handcuffs that affixed him to his bed, going running through the streets in his patient gown, breaking into the Cryer mansion and cleaning out his mother’s closet. A solid attempt but not a record-breaker. Meanwhile, Madison arrived home to find Justin waiting outside his door (which the nurse took longer to unlock than it had taken Wyatt to pick his cuffs). “I’m gonna end up killing myself,” said Justin, pleading with Madison to talk to him. “You’re the only one who understands me.” Sorry, no dice, Madison told him. When he called Jeffrey to fill him in, his boo leapt to the conclusion that Justin was up to something. That being the case, Jeffrey thought that he’d better go right over. Hey, any excuse! At Hanna’s, Candace and Mitch discovered that her mother still wasn’t home after being “removed” from the Iron Bone. Pissed, Benny went off to investigate Derrick, prompting Candace to recruit Mitch to throw his buddy off the track. While the two of them were sitting in Mitch’s truck, Candace learned that she’d been bumped from her flight — thanks, Landon — just in time for Hanna to arrive. 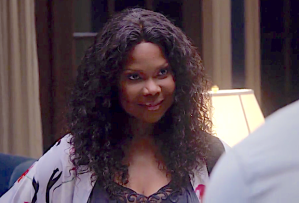 ‘GANGSTER PRINCESS’ | After sending Mitch away, Candace beseeched Hanna to let her come in and get her passport and things. “Ya got $8M,” her mother reminded her. “You don’t need nothing.” They went around in circles for a bit, then Hanna was called to the Cryers about the break-in. While she took off, Benny arrived at Veronica’s. Immediately, she threw him some of her patented sweet talk. “Benny, you’re dumb,” she said, “but you carry a big stick.” In fact, he was the best that she’d ever had. Just when it appeared that she’d convinced him to take his anger out on her, so to speak, in came David, demanding to know who Alissa was. Pretending that he was asking who Benny was, Veronica replied, “This is my young lover.” As for Alissa, “I don’t know who the hell that is,” Veronica spat. “From the looks of things, it’s somebody who needs a facial, a bath and some antibiotics, and I’m not even sure if that’ll take care of all of it.” Anyway, Veronica hadn’t sent her, she insisted (as if you can believe anything that Veronica says!).

With that, David left — and left Alissa behind without her purse or phone! Veronica almost empathized with her over David’s mistreatment until she smelled the prostitute’s perfume. “What is that?” she asked. “Ass?” Eventually, Alissa convinced Benny to give her a lift in exchange for an introduction to her friend Rog, who she was sure would know the Derrick that he was after. And she was right — Rog told Benny what street Candace’s father lived on. Still, Benny managed to resist Alissa’s wiles. Back at the hospital, after a cop informed Jim of the break-in, he looked at a phone app and discovered that the burglar was Wyatt. That being the case, Jim passed on pursuing the matter and instead sent David to the house to see just how empty his son had left Katheryn’s medicine cabinet. Finally, Hanna made her way to the scene of the crime and was asked by the police to identify a suspect: Ack! It was Derrick! So, what did you think of “Fine Together”? Is anything funnier than Veronica at her bitchiest? Hit the comments with your reactions.