The following contains major spoilers from the midseason finale of Syfy’s Wynonna Earp.

As Syfy’s Wynonna Earp headed into its midseason hiatus this Sunday night, its titular hero found her Peacemaker… only to later lose something equally valuable.

While Wynonna (played by Melanie Scrofano) attempted to trade Rosita for Peacemaker (by way of a veritable “Trial by Combat” in front of demonic nuns!), Doc aimed to put his and Wyatt Earp’s complicated past with the Clantons behind him, by negotiating a truce with Sheriff Holt after Waverly killed Mam. But just as Doc and Holt made peace, a shot rang out from behind them. Wynonna — having learned from Rosita that Mam would have been kidnapped Baby Alice’s buyer, and convinced the Clantons would have never stopped coming for her —  had put a bullet into the rival heir’s back.

As made clear in the episode prior, Doc sees not a lick of honor in shooting someone in the back. And he drove that point home that night with Wynonna, by expressing his great disappointment in her — prompting a tearful breakup just before they rejoined the rest of the gang for Waverly and Nicole’s beautiful, proper engagement ceremony. As such, viewers were left feeling (as previewed) utter joy… along with heartbreak… seeing one romance flourish just as another had foundered.

TVLine spoke with Tim Rozon, who plays Doc, about the oh-so-sad development, a hidden clue about Doc’s past, and what the rest of Season 4 (which is finishing filming now and is due sometime in 2021) might hold for fans.

TVLINE | Wynonna really stepped on Doc’s big moment there, after he had made nice with Sheriff Holt. That was a, um, “interesting” call she made.
Yeah. We had a preminion to it in Episode 5, where he says an honorable man would never shoot anybody in the back, and he means that. But more than just going by his old-school moral code, Doc Holliday is finished with fighting. He wants to be in love with the woman he loves and make a family and settle down, and to do that he’s gotta let go of the past. But the thing that he needs to remember is that Wynonna doesn’t have the luxury to do that, because she has the burden of being the hero and he doesn’t. She can’t just let go. So I don’t agree with what she did, and I definitely don’t agree with shooting him in the back, but that burden always falls on Wynonna, and it has since Episode 1. They fight together, but let’s be honest: Wynonna Earp is the one who’s got to take the brunt of the responsibility. 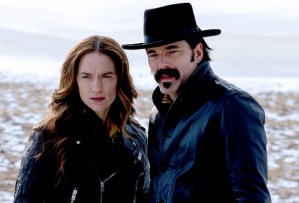 TVLINE | What that said, what do you think it will ultimately take to heal this new rift between them?
Wow…. I think it’s about letting go. I think that’s what this whole, whole thing is about — both of them finally letting go of the past. If they can do that, they can have a future; if they cant, they can’t. But like I said, it’s easier for Doc to do that. Also, his past is 150 years ago. [Laughs] Wynonna has the hero’s burden. Purgatory and all that stuff, it relies on her, so she’d have to walk away from everything.

But what a great season, though, for Melanie Scrofano and the Wynonna Earp character. The fact that she doesn’t have Peacemaker and lost her identity of who she is but still, at the end of the day, has to be the hero…. It’s great stuff. I don’t know how she’s going to be able to let go of the past. I don’t know if she can.

TVLINE | Is that why in the teaser for 4B (embedded below) she is walking around in the woods drunk? Is she not taking it well?
I didn’t see the teaser, but yeah. I don’t think she’s taking things well.

It’s hard. It’s a hard season to be Wynonna Earp. It’s never easy, though sometimes she makes it look that way. Like I said, she has the hero’s burden, nobody else does. Nobody. Not one character. People can do stuff and you can have favorites, but at the end of the day the hero’s burden is on Wynonna Earp and her shoulders alone.

TVLINE | Did you enjoy getting from that museum newsreel Wyatt Earp’s play-by-play refresher of everything that went down in the past?
One-hundred percent. But pay attention to what Wyatt said. They’re very clever people, these writers! There might be some premonitions in there that might come true….

Season 4, writing-wise and on a production level, from Episode 1, 2…. We just put the foot on the gas and never took it off. Pure momentum. And that’s a real testament to [showrunner] Emily Andras and her team and how incredible they’ve done this year. I am just blown away by the scripts I’ve gotten this year, and now I’m fortunate enough that I’ve read the entire season and what a story. What an incredible, incredible achievement and story they’ve put together. It’s something!

TVLINE | The Clantons seem to be dealt with, Peacemaker has been found. Will there still be some business between Doc and Aemon, the club owner?
It’s interesting, who knows? At least Doc and now Wynonna both know of him. We will definitely see him again, yeah.

TVLINE | I was telling Emily that Noam Jenkins (Lost Girl) is hitting the exact right notes as Aemon. He’s colorful without being over the top.
Noam is a wonderful actor, and we had a lot of chemistry together. It’s great to act with someone like that.

TVLINE | Before we go, give me one last tease about the second half of the season.
Listen, we almost lost this show, and we love this show. Every single person from writer to producer to the crew, we just love it. There is something special about this show. But more than that, there is something special about this fandom. This fandom is the most incredible fandom, built on kindness and acceptance…. It’s an incredible thing to be a part of, and this season is the season that fandom deserves.