As Part 1 of Wynonna Earp‘s midseason finale came to a close, Nicole had been drowned and Jeremy was asking a gobsmacked Waverly to trust in what he and Nedley were doing to her partner. So… should she (and we) cut Jeremy some slack?

“I think we should trust Jeremy, and trust Nicole’s posse,” the ex-sheriff’s portrayer, Kat Barrell, told TVLine on Friday evening, in between shooting scenes for Season 4’s very final episodes. “These guys have gone through a lot together, and I can’t see them letting her down. They will definitely try everything they can!”

The drowning is in fact “Plan B” in trying to undo the hex cast on Nicole by Mam Clanton, after Jeremy’s attempt to craft an elixir literally went down the drain. But once the full and wild scope of Jeremy and Nedley’s scheme is detailed, viewers like Waverly may be wondering, “What the frog?!” 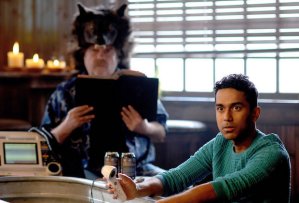 “It’s amazing to watch the gang fight to honor her wishes, because she did ask Jeremy to essentially perform this spell to undo whatever horrible thing that she is obviously hiding from everyone. So we get a bit more information on that,” Barrell previews. And as for Jeremy running this death-defying show, “It’s amazing to see that even though he and Nicole had been parted for so long, and even though there was a lot of hurt there, at the end of the day she still really trusts him, literally, with her life.”

What exactly happens next when the Syfy series’ midseason finale picks up this Sunday at 10/9 “is going to be quite crazy,” Barrell shares. “I will say that we see a whole new ‘side’ of Nicole that is very unexpected. A new version of her, I’ll say.” 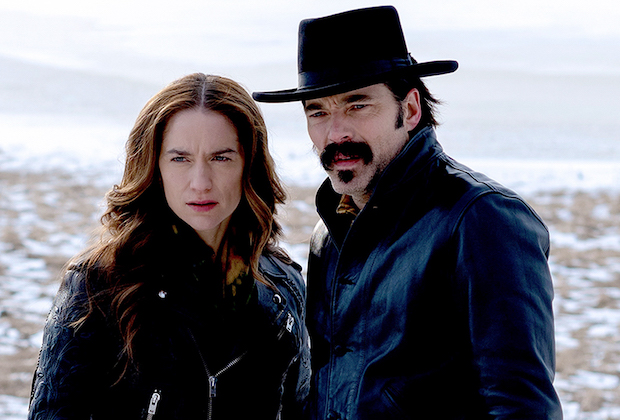 Wynonna and Doc, meanwhile, have unexpectedly run into Rosita Bustillos (returning guest star Tamara Duarte) aka The Woman Scorned in the creepy nuns’ painting. As Wynonna follows through on the plan to trade Rosita for her beloved Peacemaker, Doc — coming out of his old-timey newsreel “reunion” with Wyatt Earp — will consider a bold step in the name of burying a very old axe.

“The cool thing that I love about this next episode is that Doc is trying to let go of the past,” Tim Rozon, who plays Holliday, tells TVLine. “We saw that in Episode 5, when he hears Wyatt talking about Doc and he says, ‘That’s not the way it really went down….’ He’s starting to realize that he’s holding onto the past and he needs to let go, and that starts with someone having to forgive. Doc realizes that fighting just isn’t the way anymore.”

But will the Clanton clan, led by the viciously vengeful Mam and including Sheriff Holt and his sister Cleo among its ranks, see things the same way? Or is there an even more unpredictable threat to Doc’s noble agenda?

One thing is for certain: As all of the above storylines reach major turning points in the midseason finale’s closing scenes, Earpers will in turn experience an array of emotions.

“Me trying to explain what people are going to be going through in the last minutes… It would be impossible to guess,” Rozon says with a chuckle. “Utter joy. Elation. And then at the same time, sadness. And heartbreak. But also happiness and love!

“But pretty much love,” he asserts, “because I think love encompasses all those emotions at one time, sometimes. There’s a lot of love — the good and the bad that comes with it — going on.”