“In the summer of 1955, a group of Negro men and women moved into a house on the North Side of Chicago,” a title card at the top of this week’s Lovecraft Country tells us. “Ten days later, three people went missing inside the house, never to be seen again. Pioneering” — aka when Black people move into heretofore white-only neighborhoods — “is dangerous.”

It is, and the parts of “Holy Ghost” that deal with Letitia’s racist and violent new neighbors are legitimately horrifying. But the actual ghosts that haunt the grand, old home she buys at the start of the episode? Maybe I’ve just watched too much Haunting of Hill House, but the apparitions here sometimes were not as frightful.

There’s also the matter of the show’s mythology, which is already kinda creeping out of control… and we’re only in Episode 3 of Season 1. But have no fear — I’ll break it all down as we review the highlights of this week’s hour. 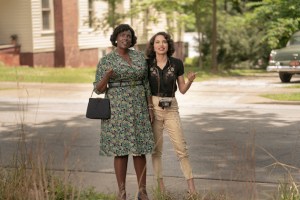 WE REALLY ARE MOVIN’ ON UP | When Leti walks her sister, Ruby, up to a huge home in a white enclave in Chicago, Ruby is suspicious. And that feeling doesn’t go away when Leti announces that she’s bought the place and she wants to turn it into a place where Black people can rent an affordable room. Letitia also wants Ruby to move in. “You’ve been there for me when I needed money, and I wanted to return the favor,” she says. The place is partially furnished but in disrepair, and the elevator nearly decapitates Leti, careening by out of nowhere when she sticks her head into the empty shaft. But she remains committed to her vision, and Ruby seems to soften at Leti’s suggestion that they live there together and “really bond as sisters.”

R.I.P., UNCLE GEORGE | It’s been weeks since the events at the lodge, and no one is doing well as they deal with the reality of George’s death. The official story is that he was killed by the racist sheriff, but Hippolyta senses that there’s something Atticus and Montrose aren’t telling her about her husband’s killing. Realizing that he’s overstayed his welcome at his aunt’s house — and that he and Montrose are too combative to be roommates — Atticus swings by Leti’s new digs to tell her he’s heading back to Florida. Just then, though, some racists who live in the neighborhood park their cars in front of the home and strap bricks to the horns in order to make them blare all day and night. The white cops that drive by look the other way as the car owners menacingly sit on their vehicles’ hoods, staring at the house. “Maybe I will stick around a little longer,” Tic says, changing his mind.

WHOLE LOTTA SHAKIN’ GOIN’ ON | Weird stuff starts to happen around the house. A creepy figure hovers near Letitia while she sleeps and yanks the covers clear off the bed. The house’s heating system goes all kerflewy, and when Leti descends to the basement to fix it, she’s terrified by banging, shaking and voices coming from a trap door. She brings Atticus down to investigate, but all they find is a secret chamber that he suggests would be good for her darkroom. They have a close moment where they talk about the combined stresses of her awful neighbors and of keeping the secret about what they saw at Ardham, but then it passes.

Days later, Leti throws a rockin’ housewarming party. Ruby sings. Leti circulates with a pitcher of punch, which she abandons when a guy asks her to dance. That’s when Atticus walks in, looking all kinds of fine in his military uniform. He watches her. She watches him watching her. And a few minutes later, after she retires to an upstairs bathroom for a moment, he follows. Are any of us surprised when he grabs her and they go at it, right up against the wall? Nope. Is it any less hot because we knew it was probably going to happen? Also nope.

After they have sex, Atticus notices blood on his hands, and Leti mumbles something about not realizing her period must’ve started. To his credit, Tic is not squicked in the slightest. He sweetly smiles at her and says he’ll see her downstairs. After he leaves, she sobs. (And she didn’t even notice the ghost in the mirror!)

But the lovers don’t get much chance to process, because all of a sudden, there’s a burning cross on Leti’s lawn. So she grabs a baseball bat and stalks out, followed closely by Atticus and some of the other men, all of them armed. A furious Leti takes her Louisville slugger to both headlights… and the windows… and the windshields of all the cars in front of her place, knocking off the bricks roped to the still-sounding horns in the process. Ruby pulls a car around, everyone dumps their weapons into the trunk, and she peals outta there just before the police arrive on the scene. Even before the cops have gotten out of their vehicles, Leti and the rest of the Black people in the yard have knelt down and put their hands up. Forget ghosts and spirits: The resignation with which Leti, Tic and their friends assume the position is the most haunting thing about this episode. 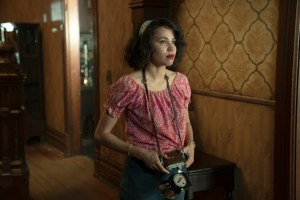 SPIRITED DISCUSSION | The cops rough Leti up and subject her to a barrage of questions about the house. Eventually, they let her go. But after she has another insanely scary moment in her basement darkroom, she meets Atticus at a coffee shop to tell him what she’s starting to believe: “The house is haunted.” After all they’ve seen, he barely blinks: “Walk me through it,” he replies.

The short version? A University of Chicago scientist named Hiram Epstein was the home’s previous owner, and he was a sicko who conducted heinous experiments on Black people, a bunch of whom are probably buried in the basement. And the police chief who was giving Leti such a hard time was probably supplying Epstein with his test subjects. The dead people’s faces are showing up in the photos Leti has taken around the house, and she thinks Epstein’s spirit is trapped there, too. Basically, there are a lot of angry, undead people there. (Ruby’s pretty ticked off, too, after Leti inadvertently admitted that she bought the house with a windfall from her mother, which showed up out of the blue and which Leti didn’t think to split with her siblings.)

Then, Letitia admits that she was a virgin until the night of the housewarming. Tic is surprised, and starts to apologize, but she tells him she doesn’t regret it. The conversation segues to what happened in Ardham and how Leti has felt “like a ghost” since she returned. “I thought the world was one way, and I found out it isn’t. And it terrifies me,” she says, but she’s adamant that she won’t live in fear.

GET OUT! | So Tic and Leti follow a priestess-type woman around as she tries to spiritually cleanse the house, winding up in the basement. At the same time, unbeknownst to Leti and Tic, three of the racist neighbors break into the home. The cleansing seems to be going well… until the spirits of all of the test subjects AND Epstein show their faces. Epstein’s ghost possesses Tic, who screams at Leti to “get the f–k out of my house!” But the test subjects rally around Leti, and eventually, they banish Epstein from the place. (P.S. Tic is fine.)

But the racists who broke in are not so fine. The ghosts of the test subjects know that these are bad guys, and they kill all three of them. At the end of the hour, we see their corpses in a sub-basement passage littered with bones.

FOLLOW THE MONEY | But Tic still has questions. And when he goes to see the realtor who sold Leti the house, Christina Braithwaite is there. “Leti’s inheritance didn’t come from her mother,” he realizes, “it came from you.” Turns out, the house’s original owner, Mr. Winthrop, was a founding member of the Sons of Adam. He stole pages from the Book of Names, and…. honestly, I read the book so I can follow where they’re going with all of this, but it’s VERY confusing, right? Long story short, Christina can’t be killed — she’s got some kind of protective charm on her — and she thinks that Atticus should go look for the missing pages. “Call me when you’re ready to learn more about our family legacy,” she says airily as the episode ends.