Manifest‘s next flight may have been delayed from this fall until 2021, but that didn’t keep showrunner Jeff Rake from celebrating “828 Day” (as in Aug. 28) with some scooplets for fans.

In a video posted to Twitter on Friday (embedded below), Rake shares that Season 3 will pick up three months after the events of the Season 2 finale, during which (among other things) Zeke died but came back to us, and a fishing boat off Cuba dredged from the sea a tail fin from Montego Airlines’ Flight 828!

Speaking of the latter, Rake’s eight teasers include that “Ben and Saanvi do a deep dive” on said tailfin, which he notes was found by a boat named Tesoro di San Antonio — “the treasure of Saint Anthony,” which is fitting since Saint Anthony is the “patron saint of lost things.”

Rake also shared that “a long-lost character will make a shocking reappearance”… and Jared will have a “complicated new relationship” of the romantic sort, while newlyweds Mick and Zeke move in together with a “third party.” 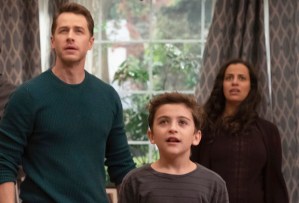 New faces for Season 3 include someone from Grace’s side of the family (“Let the fireworks begin,” Rake teased) and a never-before-seen passenger who proves “integral to our series-long story.” (As Rake told TVLine at the end of Season 2, “We’re going to meet [someone] who is going to become one of the more important characters in our series. I imagine us looking back in later seasons and trying to remember when that character entered, because they’ll have become so integral to our storytelling.”)

In keeping with the “828 Day” theme, Rake follows the 8 teasers with the debunking of 2 fan theories (no, The Major is not Michaela from the future!), and then 8 things “you may have noticed” from the sophomore season (which I interpreted as likely clues to what else is coming).

8️⃣ things to look forward to in Season 3
2️⃣ fan theories debunked
8️⃣ things you may have noticed in Season 2 pic.twitter.com/kaSmwxTsEP