Spoiler alert: We’re about to break down the season finale of Netflix’s Teenage Bounty Hunters. Proceed at your own risk.

The final scene of Teenage Bounty Hunters‘ first season drops a bombshell so utterly game-changing, I’ve got half a mind to call Bowser so he can bring the show itself to prison for crimes against my anxiety. (Let’s be real, considering Netflix’s penchant for canceling perfectly good shows, there’s a good chance we’ll be left hanging from this cliff forever!)

OK, let’s break the episode down: Fresh off their latest discovery (“Mom’s a wanted fugitive! Happy Friday!”), Sterling and Blair return home to demand some answers. What they end up getting, however, is merely Debbie’s version of the truth, that she fell in with some “extreme” Christians back in the day and helped bomb an abortion clinic. They believe their mother’s story, so much that they convince Bowser not to bring her in and collect the reward, even if that favor costs them their jobs at Yogurtopia — and their side hustle by extension.

But the girls realize they haven’t gotten the whole story when Sterling is picked up from the lock-in (more on that later) by a woman revealed to be — wait for it — Debbie’s twin sister Dana! As a panicked Debbie explains to Blair, it was actually Dana who bombed the abortion clinic, and she’s still considered extremely dangerous. We see this firsthand when Dana’s boyfriend Levi decides to hold Sterling for ransom. Thankfully, Sterling’s online banking activity (plus a clever note written on a bathroom wall using lip gloss and Sour Patch Kids) enables Blair and Bowser to track her down and save the day.

Then comes, shall we say, the mother of all twists. With the police on their way to arrest Dana, she reveals one last secret, “one last moment of truth before it turns to absolute hogs–t.” It turns out she is Sterling’s mother. Which means Sterling and Blair aren’t twins. They aren’t even sisters. They’re… cousins?! 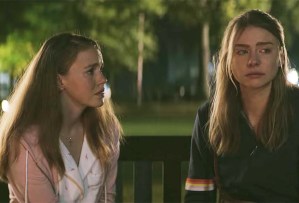 * Sterling and April’s relationship takes an unfortunate turn when the latter shows up late to the lock-in and immediately freezes the former out. Not only does April act like they hadn’t become friends — let alone girlfriends — but she also takes the charade a step further by flirting with Luke. Sterling keeps her composure better than most would, but the bittersweet sounds of Kacey Musgraves’ “Slow Burn” prove too much for both her and April, leading to another revealing conversation outside of the school. “I’m not ready to come out,” April explains, adding, “As long as my dad is my dad, I can’t be all out there, sexually speaking.” She tells Sterling that he’s been cleared of his charges and released; he even asked about her and Blair, which April thought was “so random.” In this moment, Sterling looks scared enough to puke… and can you blame her?

Unfortunately, Sterling’s hot mess of a love life takes yet another turn when Luke shows up to comfort her. When he asks for Sterling’s permission to date April, she fully breaks down in tears, telling him that she misses how simple everything was when they were together. They even kiss, only to be interrupted by Sterling’s “mom.” (Actually, now that we know Dana really is Sterling’s mom, I guess I don’t need to put that word in quotation marks.) 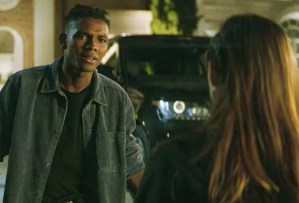 * I figured that things wouldn’t be smooth sailing for Sterling and April, but I still had high hopes for Blair and Miles — and I was a fool for that. Blair goes full teen rom-com in the finale, crashing Miles’ bizarrely formal family dinner to profess her love. The whole speech is very Blair, including this iconic line: “I feel like I belong with you, and I would kick myself every day in the butthole if I didn’t tell you that I love you, Miles. And I think that you love me, too.” But just when you think Miles is going to return her affections… his mother asks, “Who is this?” Blair is understandably crushed that Miles never told his parents about their relationship, delivering another epic speech before storming off into the night. “I know who I am,” she tells him. “I’m a passionate, exciting, depressed, thoughtful, artistic, badass, super hot woman in training. And I’m sorry that you’re not gonna get to experience all the cool s–t that I’m gonna get to do in this world.” Boom.

Which of the aforementioned finale twists blew your mind the most? Are you foaming at the mouth for a second season? Grade Teenage Bounty Hunters in our polls below, then drop a comment with your thoughts on the Netflix series.