Atticus, George and Letitia spend most of this week’s hour in the mansion they arrived at last week. But being out of the woods does not equal safety, as becomes abundantly clear after all of the mind-violation, forced imprisonment and possibly lethal gunshot wounds.

And then the weird stuff really gets underway. Read on for the highlights of “Whitey’s on the Moon.”

MOVIN’ ON UP | The episode opens with a very funny montage of George and Letitia enjoying their guest rooms in the house. As the theme song to The Jeffersons plays, George dances around, reveling in his suite’s stocked bookcase. Meanwhile, Letitia can’t believe the closet full of clothes that are all exactly her size. But Atticus doesn’t share their joy, and he soon learns that they don’t share his memories of what happened the night before. It’s as if someone wiped Leti and George’s minds about that horror show in the forest. But Atticus remembers everything. 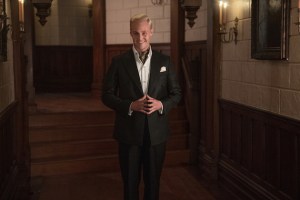 The blonde man who greeted them when they arrived is named William, and he fills them in on the history of the house in which they stand. (Side note: The mythology in this episode is a LOT. I will try to keep it as simple as possible.) The place belongs to a man by the name of Braithwaite, and it’s an exact recreation of a home that burned down in 1833, killing almost everyone inside. The place, which has no phones, was built so the Braithwaites and the members of their “lodge” could chill in peace.

Atticus has been told that his father is in Boston with Mr. Braithwaite, but he doesn’t buy it. He also is highly suspicious of William, who presents himself as a close friend of Braithwaite’s daughter, Christina. Atticus puts two and two together and realizes that Christina is the blonde with the silver sedan who saved him from the racists who chased him out of the diner.

WELCOME WAGON | Ahead of a celebratory dinner full of lodge members that evening, George, Leti and Atticus walk around the town nearby. It’s an Amish-like community where they encounter a woman with snapping dogs who informs them that even this weirdo enclave is a sundown town. George is sure that Montrose is being held underneath a big stone tower where food is stored, but they realize they’re going to have to come back later to try to bust him out. 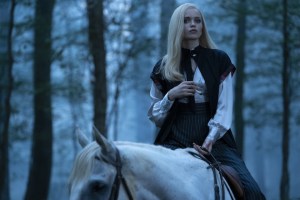 On the walk back to the house, two big things happen. First: George suddenly remembers that Atticus’ mother once said she was descended from a slave that escaped her master’s house after a fire. Second: More of the monsters attack, but they’re called off when Christina rides up and blows the same whistle they heard in the woods the night before.

The trio is brought back to the house, and here’s where the crazy gets really crazy, so let’s shorthand it. The elder Braithwaite (played by Scandal‘s Tony Goldwyn) is related to Atticus, thanks to that long-ago ancestor getting his slave pregnant. He’s also trying to open a portal to the dawn of time/the Garden of Eden, and he essentially wants Atticus — a reservoir of the power imbued in Braithwaite’s ancestor — there to signal boost his efforts. Or, as Christina later tells Atticus, “My father intends to open a door to the Garden of Eden… He believes he’ll step through it into eternal life.”

Eventually, Tic, Leti and George are bound to their rooms and made to have terrible hallucinations that seem very real. Leti’s involves her and Tic getting to know each other in the naked sense, but just as things are heating up, she starts to say no and he stop listening. Then, he unbuttons his pants, and his schlong is a snake. I KNOW. George imagines that a woman named Dora, for whom he cared deeply but who is now dead, comes to dance with him. (We later learn that Dora was Montrose’s significant other. Oops.) And Atticus thinks a woman he knew in the war is trying to kill him, forcing him to kill her instead.

All of this mental torture is being done for the entertainment of the lodge members, who have arrived for dinner and who watch from the hallway. Later, thinking he’s outsmarted them at their own game, Atticus attends the meal and — citing the group’s bylaws, thanks to a book George found in a secret room — uses his power as a direct descendent of the original Braithwaite to demand the release of his father.

TRICKED YA | “It cannot be this easy,” I think as Leti, George and Atticus return to the stone tower, knock out the woman and prepare to free Montrose… only to realize he’s tunneled his way to freedom on his own. Turns out, I’m right: The four of them only get a little way down the road before they hit an invisible force field — like the one Christina used in the premiere — and it stops them right there.

Dazed, everyone gets out of the car to see Braithwaite holding a gun. He shoots Leti and George to force Atticus to return to the house and participate in some kind of ritual ceremony. It works.

Eventually, Atticus is clad in only a robe and forced to stand in front of a wooden door-looking thing. The members of the lodge surround him. Braithwaite starts chanting, weird energy starts flowing around the room, and pretty soon it looks like the portal is actually going to open. (Meanwhile, audio of Gil Scot-Heron reading his poem “Whitey’s on the Moon” plays in the background.) Atticus’ life force seems to be getting sucked out of him in a very painful manner… and then he notices a pregnant slave looking at him from the other side of the portal.

It’s clearly his great-great-however-many-times-great-grandmother, and her appearance galvanizes something that allows him to somehow change the energy flow. The house begins to shake. Leti (who’s been healed by some of Christina’s magic) Montrose and a very pale looking George (who hasn’t) flee for the car. And then Atticus screams, and the power rebounds into the room and instantly turns everyone but him — including Braithwaite — to ash.

Still, the mansion is about to crumble around his ears. So Atticus follows his forebear through the portal, and she leads him to the front of the house and out the door… just before the entire place falls like a sandcastle when the tide rolls in.

Outside, Leti runs to Atticus and hugs him, relieved he’s alive. But then she gives him a look that communicates some very terrible news, and Atticus runs to the car to find George, dead and in his brother’s arms, in the backseat.

An important point I missed before: Based on some conversation between Montrose and his brother earlier in the episode, it seems like George and Dora might’ve been hot and heavy for a while, and that Atticus might actually be George’s son. I’m pretty sure Atticus isn’t aware of that, but he is absolutely devastated as he is overcome with sobs. “I’m sorry, Uncle George,” he cries as the episode goes to black. “I love you, Uncle George.”