The following contains major spoilers from the series finale of ABC’s Marvel’s Agents of S.H.I.E.L.D.

Deciding on the series-ending fates of the Agents of S.H.I.E.L.D. was not a daunting task, but a fun one, says one of the Marvel drama’s showrunners.

When it came to figuring out who would end up where, doing what, and with whom in the series finale’s closing sequence, which followed a one-year time jump, “I don’t remember struggling with that too much,” co-showrunner Jed Whedon told press this week “I mean, it was fun” — in part, because the rest of that final episode was so jam-packed with timey wimey crises and solutions.

“In the first half,” Whedon noted, “it was like, ‘There’s so many moving parts to this time thing. My brain’s going to explode!’ And this was just blue sky, ‘What could it be?’ It’s just fun to think about, and so there are tons of great options.”

Simply said, when locking onto where Coulson, May, Daisy et al would end up, “We sort of tried to put everybody in a different-feeling thing and in a different place and separate them as much as possible,” Whedon said. “But I don’t remember struggling with that. I think that was more just the fun of the ending.”

As revealed during the final sequence, as each team member digitally exited their virtual, one-year-later reunion at the New York speakeasy:

MACK is still a (duster-wearing) bigwig with S.H.I.E.L.D., and is currently supervising things aboard an helicarrier. His partner ELENA is also a decorated S.H.I.E.L.D. agent, and returned to chasing an 0-8-4 with PIPER and an LMD DAVIS. “It’s clear that Mack and Yo-Yo are still together in a relationship and working with one another — and proud of one another,” said co-showrunner Maurissa Tancharoen.

FITZSIMMONS are retired with a capital-R, and left the get-together to resume a countryside picnic with Alya. “I think for a long time, we had a sense that Fitz and Simmons would be sort of out of S.H.I.E.L.D. and living the simpler life — while secretly working with Daisy on the side,” said Whedon. (Read much more on that happiest of endings.)

MAY is an (exhausted!) instructor at a S.H.I.E.L.D. academy that is named after no less than the late Agent Phil Coulson; FLINT is among her cadets. “I think it made perfect sense to us that May would be a teacher at Coulson Academy. Like, all of that just sums up her relationship with Coulson [and her as] the reluctant teacher,” said Tancharoen. “She has always been the wise teacher amongst the group, the sort of mother figure, and also to put her with Coy (Stewart, who plays Flint) at the end there and knowing that she is helping to foster the lives of all these potential agents…. That made beautiful sense to us.” 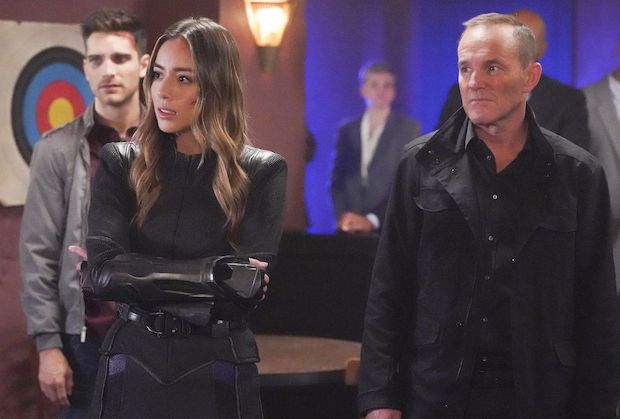 DAISY is still with S.H.I.E.L.D., working aboard Zephyr 3 as an “astral ambassador” (as her typewriter-loving “dork”of a partner puts it). SOUSA (whom she brought up to speed on alien life with an E.T. screening) and her sister KORA are at her side. “In terms of space, we loved that feeling — especially as our budget constraints became a concern — that it feels vast, and we wanted someone to be out exploring that,” Whedon explained. “It felt right to put her in there, in command of the Zephyr.”

COULSON is still his LMD/Chronicom hybrid self, mulling a sabbatical while having an open invitation from May to come spin some yarns for the kiddos at the Academy. Fittingly, in a callback to the ending of the ABC series’ very first episode, he has just gotten his “Lola” back (thanks to Mack, forever the mechanic), which he pilots up, up and away before things fade to black. 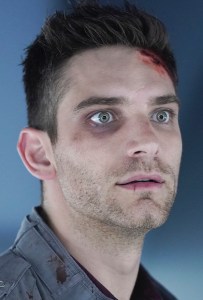 One agent who did not make it to back to the original timeline was Deke; instead, FitzSimmons’ oneday grandson volunteered to stay behind in the 1980s to 1) set off the gizmo needed to propel the others into the timeline-graversing quantum realm, 2) take a leadership role in that era’s S.H.I.E.L.D. and 3), you know, be the rock god that he is.

“The one thing we talked a little bit about was leaving Deke behind,” conceded EP Jeff Bell, “but having him make what was truly a big sacrifice… makes sense.” Plus, the producers love the idea of a rock star moonlighting with a spy organization (or vice versa). “If we were ever to come back for another [series], it would be that show,” Whedon quipped.

Considered all together, the S.H.I.E.L.D. EPs hope the decisions that were made resonate with longtime viewers as strongly as they did with the writers.

“Seven seasons is a long time to be working on the show, to be invested in these characters, to be living in this story as well as in the production aspect of things, and in our relationships with each other, the writers, the actors and everybody involved in the show,” Tancharoen observed. “The emotional context of saying goodbye to this experience…is definitely something that’s reflected in where we leave our characters at the end of the show. So it is very personal to us, and I do think there’s a sense of hope for what’s to come for each of them.”

And as Mack himself noted — and to drive home the theme of the show, the finale, and what the agents were ultimately fighting for — S.H.I.E.L.D. was a family.

Following the one-year time jump, “They’re already established in their new lives, but no matter, there’s still longing for what was, and I think that will always be there,” said  Tancharoen. “That bond between them will always be there. So, hopefully, that sort of hits home at the end for [everyone].”