Kiesha is out of that basement, but that doesn’t mean the horror is behind her.

This week’s The Chi focuses on Kiesha’s first days at home after her escape from being Omari’s prisoner. Her re-entry into normal life is rough, and her family’s attempts to understand what she went through are even rougher.

Kiesha spends her first night home from the hospital with a chair propped up against her bedroom door and a pair of scissors in her hand to use as potential weapon. Three days later, she hasn’t said much to Nina, Kev or Dre, aside from telling her mom that “nothing happened.” We learn that Omari died from the wounds she gave him, and that people at school have been spreading all kinds of rumors about how she ended up in the kidnapper’s house. And then, to add insult to actual injury (did you see those bruises?), Kiesha finds out that her college — thinking her dead — gave away her scholarship.

Kiesha doesn’t say much during the episode, save for when Jada and Emmett show up with food. All Emmett has to do is knock on her door and suddenly she’s much more relaxed, inviting him in and talking with him for hours. He tells her about cheating on Tiffany with Dom, and she confesses that she feels like she’s never going to be the same. “You’re not,” he answers. “I wanna be,” she says. Later, he makes her laugh for the first time in a very long time.

Things seem to be on the upswing when she comes out and starts to eat what Emmett and Jada brought over. But all of a sudden, Kiesha is demanding to know why her family couldn’t figure out that she was just a few blocks away. And then Kevin is outing her as dating a drug dealer, saying he’s sick of lying for her. (He also happens to mention that Dre and Nina cleared out her room while she was gone, which doesn’t land well.) 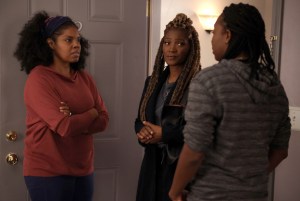 We also get some discussion of how both Jada and Nina were abused earlier in their lives, and how it changed them. But don’t worry — the episode isn’t all heavy: Kevin, Jake and (against his wishes) Papa definitely get goofily high right under Nina and Dre’s noses. And later, when Ronnie shows up at the door, he says he’s there at Kiesha’s invitation. “I had to kill him, right?” she quietly asks him as they sit at the dining table, adding that she’s haunted by Omari’s face. Ronnie says that he sees the face of the person he killed every day, too. She laments that all she wanted to do was leave town, but now she’s stuck in Chicago forever. Ronnie tells her that she gave his life meaning, but I’m guessing that’s not super comforting to her in this moment.

Toward the end of the hour, Kiesha gathers a bunch of her clothes and her track medals, tosses them in the bathtub and lights them on fire. Nina rushes in, but Kiesha stops her mother from extinguishing the flames. “Maybe I wouldn’t h ave got kidnapped if I hadn’t been wearing this s–t,” the teen says, prompting Nina to say once more that no clothing choice gives someone the right to violate someone else. “I’m sorry I wasn’t there to save you,” Nina says sadly. “It’s OK, Mom. I learned how to save myself,” she replies.

In the episode’s final scene, Dre, Nina and Kiesha leave the apartment to go to therapy. Kiesha pauses once she’s outside, and Nina asks if she’s OK. She’s definitely not, but let’s hope this is a step toward a time when she will be?