We have a verdict in Perry Mason‘s big season-long case, and that verdict is… no verdict at all.

After an emotional turn on the witness stand from Emily Dodson and a stirring closing statement from Perry, Emily’s murder case ended in a mistrial when the jury couldn’t reach a verdict. (Pete paid off one of the jurors to vote “not guilty,” but two others voted that way anyway.) Emily was free to hit the road with Birdy and preach that her baby was resurrected — even though she knew the new baby wasn’t Charlie — while Pete left to go work for Hamilton Burger, Ennis got his just desserts when his partner Holcomb drowned him in a fountain, and Perry and Della started up their own firm, with Paul Drake as their investigator. Oh, and Perry found Sister Alice working at a seaside diner, and they talked about how life doesn’t wrap things up in a neat bow for you. (Kind of like this show.)

TVLine chatted with creators/executive producers Rolin Jones and Ron Fitzgerald, who co-wrote the finale with Kevin J. Hynes, to get the scoop on why Emily’s trial ended the way it did, the very real chemistry between Perry and Sister Alice (you saw it too, right?) and the process of winning over skeptical fans of the original series — plus, they hinted at what we might see in Season 2. 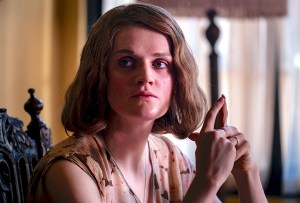 TVLINE | Emily’s case ultimately ends in a mistrial. Did you play around with different scenarios for the finale, maybe even a “not guilty” verdict?
RON FITZGERALD | Nope. [Laughs]

ROLIN JONES | We were not quite ready to think that one man could bust through that much institutional power. The hung jury seemed like the one bit where we thought, “Oh yeah, well, that’s a huge win.” And kind of suggesting that they’re never going to try her again… that was about as much popcorn as we could swallow, I think.

TVLINE | Emily ends up traveling the country with Birdy, telling people the baby is hers when we all know it’s not. Is that the closest thing to a happy ending we could expect to see for her?
JONES | Boy, when you put it like that, we sound like real grim a–holes, don’t we? [Laughs]

FITZGERALD | It’s just sad. The poor girl was just so chewed up by the system… I guess there is a measure of happiness, but at what cost? The cost of rationality? She’s so lost that she needs so badly to believe in something, and someone gave her a chance to believe that was her child, so she jumped at it. I think it kind of more tied into the theme of faith that we were kicking around: Sister Alice’s faith, Nathan’s faith, and what you put your belief into.

JONES | What we were thinking about is that any viewer is going to have a radically different opinion about where she ends up in the story, and I think we kind of just wanted to… happy ending or no happy ending, we wanted an ending that would haunt and that would stay with you for a little bit. Whether you feel upset about that ending or OK about that ending, it seemed like it wanted to live in some murky, ambiguous soup. [Laughs]

TVLINE | Well, speaking of “murky, ambiguous soup,” you did leave us with a number of unanswered questions, like what exactly happened to Charlie’s grave and body…
JONES | Ah, life. [Laughs] Ain’t that the way, though? I don’t know if it was consciously done, but the Perry Mason that was so wildly successful — and we have a lot of admiration for that — delivered a very sweet piece of pie to the audience at the end, in Minute 59 every week. And I think right from the beginning, in our conversations with everybody involved at HBO, nobody wanted that. So something that can stick with you and stay with you helps a little bit, because you haven’t been delivered all the answers to go, “OK, what’s next?” It was a dramatic strategy, at the very least.

FITZGERALD | And all the stuff that’s happened over the last however many months, it’s been a crazy time in history… a pat ending would just seem like a lie. The truth is that people’s religious beliefs are monetized. They’re weaponized and monetized, and the same thing with people’s racial ties. It just seems like the world we’re in today, a pat ending would just be so dismissible.

TVLINE | Perry tracks down Sister Alice at that seaside diner, and they have that great conversation about faith versus evidence. Did I sense a romantic spark between those two? It made me want to see more scenes between them.
FITZGERALD | Boy, you know, that was something that I personally really wanted to do. It’s just kind of never found a landing spot in this season. But it always felt like it wanted to happen, you know? And if we had had three more episodes, it probably would’ve.

JONES | Yeah, that’s the danger of putting two very charismatic, attractive people in scenes together. They could be talking about a goddamn phone book or a shoe, and that chemistry might be there. 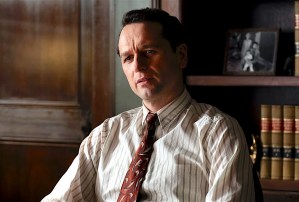 TVLINE | You did make some big, bold choices with this reboot, and some longtime fans of the original were turned off at first. How did you balance honoring the Perry Mason legacy with creating something fresh and new?
FITZGERALD | Yeah, well, once HBO is doing it, you can throw “crime of the week” out the window, right? None of their shows do that. Certainly, we never set out to destroy anyone’s love of Perry Mason with Raymond Burr. Those things are still out there. Everyone’s free to go watch them. I don’t think either of us saw a point in trying to just redo those. So it was like: How do you do a 1932 noir for a modern world? How do you try to make it relevant? And at the same time, if you read the early Perry Mason books, he does a lot of detective work and not a lot of court stuff at all, if any. He was a very investigative-y lawyer.

JONES | Yeah, I think one of the first tips about doing an origin story was: “Boy, this guy does a lot of f–king detective work for being a lawyer!” [Laughs] And we were like, “Oh, I wonder, did he go to law school first? Or maybe did he have a different job?” There were a lot of things in those books that led us to some very simple and very obvious choices. And when we signed up for the gig, we knew there wasn’t going to be a thing we could do that wasn’t going to alienate the hardcore fans. It’s your favorite show, you go to bed with it, it’s been this lovely thing. I think what has been encouraging is that for those who stuck with it, once we started suiting up lawyer-wise, I think you could see us winning some of those people over. You can begin to see some conversation about, “Oh, maybe it’s way more respectful than it seemed to be at the beginning.” And that’s been gratifying.

TVLINE | Congratulations on the Season 2 renewal. But you went into this thinking it’d be a limited series, right? So did you have to tweak anything to set up more seasons?
JONES | I mean, we built the story where we got the Super Friends together, you know what I mean? So we put the three core members as far removed as possible and bring them together, which can work satisfyingly for a limited series or something going forward. But the more that you’re going forward and driving story, the more things you have discarded that you go, “Oh, wouldn’t that be cool if…?” That’s just some of the fertilizer that happens as you’re building a story, and then towards the second half of it, you start writing relationships and little plot points, whether it be one of the two cops who doesn’t get his demise or Hamilton Burger… you start to suggest that there are tentacles going forward.

FITZGERALD | We purposefully wrote to the beginnings of the first book, so that it was there. The door is right there. All you’ve got to do is open it.

JONES | Yeah, that second-to-last scene is literally the first two pages of the first novel. We’ve really been bowing to the throne of [book author] Erle Stanley [Gardner] right from the beginning, and want to be incredibly respectful. And Erle Stanley, he was an aggressive guy. He wrote aggressively, at least plot-wise, and I like to think that, given the parameters and it being HBO and all that, we did something like the kind of thing he would’ve done, if he had been here and now.

TVLINE | Can we expect Season 2 to follow one long case again? Will it be that client who walked in at the end of the finale?
FITZGERALD | We’re usually looking at the novels to use those as jumping-off points… We weren’t sure there was going to be a second season or anything, but we knew we wanted to start into those books. So it will be from the books. We’re looking at using a couple of the books in different ways. I guess I’d kind of liken it to the [Benedict] Cumberbatch Sherlock thing, where you can kind of see the DNA of the Arthur Conan Doyle in there. It ain’t Basil Rathbone! [Laughs] 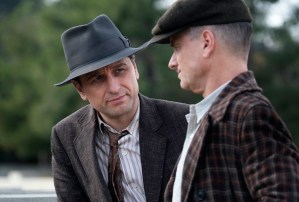 TVLINE | Any more hints you can drop?
FITZGERALD | I will tell you this: John Lithgow asked if there was going to be the ghost of E.B. in Season 2. There will not be. [Laughs] No ghost of E.B. That will not happen.

JONES | When you die on Perry Mason, you die.

Alright, now it’s time to cast your vote: Give the Perry Mason finale — and Season 1 as a whole — a grade in our polls, and then hit the comments to share your verdict.