Warning: This post contains major spoilers for Sunday’s The Chi.

Thank goodness for Ronnie’s dogged determination and a conveniently discarded crowbar. Because without either of those things, this week’s The Chi might not end on such an up note.

After weeks spent in her kidnapper’s basement, Kiesha finally finds freedom in Sunday’s episode. But she doesn’t escape unscathed: As the episode makes clear, Kiesha was raped and terrorized by her captor, a man named Omari who was hiding in plain sight in the neighborhood since the beginning of the season.

TVLine talked with Birgundi Baker, who plays Kiesha, about her character’s survival — and what the rest of the season will look like for the traumatized teen.

TVLINE | What were your first reactions when you found out what would happen to Kiesha this season?
Oh, it was about a month-and-a-half before we started shooting. And they called me and told me that they were going to get rid of the police characters [Detectives Armando Cruz and Alice Touissant]. And so, well, if we get rid of the police characters, then we have to bring up an issue that police don’t really involve themselves in. So [the writers] thought of Black missing girls. Right now, there are [roughly] 75,000 missing Black women, so that was how they came up with the story. And I got chills when I heard this storyline, because I’ve been on this show since Season 1, and my goal from Day 1 was to be a series regular. And it didn’t happen in Season 1 or Season 2, so when they called me and told me what the storyline was, I just felt like it matched up so well with the time right now. It was perfect timing for the story.

TVLINE | Talk to me about being in Kiesha’s head for all of those episodes that she was in the basement. From the outside, it seems like it would be harrowing.
Yeah. I started to just pray and meditate before every scene. And once I found myself in my groove, I would just work on just staying there. So when we would cut, most of the time the cast gets together and laughs and jokes and do what people do on a break. I couldn’t do those things. I would have to go in the corner and read updates on missing girls, or there was an interview by Shaun King that I listened to over and over and he would talk about missing girls. So I just listened to that or just fell back to meditation just to keep my mind where it was at in the moment and not get distracted. I had to constantly work on my own focus in order to stay in Kiesha’s space.

TVLINE | What was it like with Cedric Mays, who played the kidnapper, Omari? Did the two of you talk between takes?
We did not. We kept our distance. Every now and then he would ask me — because there was touching, and we were very close in some of the scenes — so he was very polite and he would ask me, you know, am I okay? And I’d let him know, “I’ll tell you if I’m not okay. Just say like stop talking to me. I’ll talk to you when I want to talk, you know?” [Laughs] … The distance that we had so far, it was helpful, because I wouldn’t talk to my kidnapper. I did get a chance to talk to him, person-to-person, after everything was done with. But we did not have a lot of conversation. We did keep our distance.

TVLINE | This is an icky clarification, but I want to make sure everyone is clear on what happened to Kiesha: He raped her, correct?
Yes.

TVLINE | Aside from the monologue in Episode 6 where he talks about getting rejected by his high school crush, the audience doesn’t get a lot of information about why Omari singled out Kiesha. Did you ever talk with the producers or writers about why he was doing what he was doing, or whether we’d ever get more information that we do in that scene?I did go to them and ask them, you know, why Kiesha? And their explanation was exactly what was in the story. He went through what he went through with who he thought he loved, and he didn’t get that love back. And so I guess for him it’s also a trauma thing, but that was it.

TVLINE | Yeah.
That was all of the information — and it just feels like that’s not enough. That’s not a good enough reason to take someone away from their day-to-day life, take them away from their family and friends, violate their body and their mind. But there are so many cases of missing girls. Like, I hate to say it, but the possibilities of reasons there are just so many and they’re just so wild, you know?

TVLINE | Of course. It struck me as being very true to life in that we don’t always get a neat, tied-in-a-bow reason why terrible things happen.
Right, exactly. Yes.

TVLINE | Let’s talk about when Ronnie bursts through the door. If I read Kiesha’s response correctly, she’s not all that sure that what’s happening is going to be good for her.
Yes. So when Ronnie enters, like you said, I think there’s a lot going on through Kiesha’s mind. Finally there’s someone here that’s not Omari, so this may be her way out. But she’s been through so much, how can she just trust the next person that walks in, you know? 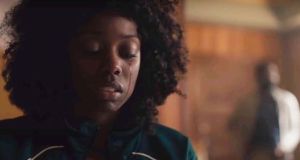 And also, she recognizes him. She knows who Ronnie is. I think everyone in the neighborhood knows who Ronnie is, so that’s another thing that’s like, what? Why? I hate to call him a killer, [but] I’m dealing with what I’m dealing with and then in comes this killer who could be either on this side who could be for me or against me. And so Kiesha does have that moment of: What is happening? I have not watched the full episode yet, but I do remember them getting a shot of the door. So when Ronnie comes in, he walks in, and he leaves the door open. Kiesha looks at Ronnie, and she looks at the door, but she has not seen this door open this freely in weeks.

So as soon as she registers that the door’s open, the whole thing happens with Ronnie and Omari and Kiesha can run out, this is her moment to run out. But this is also her moment, while Omari is down, to get a couple of hits in and redeem herself a little bit, so she takes that moment. She takes that moment, and she goes to town on Cedric. Which, you know: I can put myself in Kiesha’s shoes because it’s my job, but I can’t really begin to imagine what these girls go through. But I feel like if I had the chance to get at someone who did this to me, I’d probably take it too, you know?

TVLINE | Of course!
So I take that moment.

TVLINE | It also feels like a tiny resurgence of the Kiesha that we know, right?
She has a backbone, yeah!

TVLINE | After being inside for weeks, she gets outside, and there’s a lot that plays across your face. What do you think she noticed the most?
Oh, I remember shooting that scene and the director telling me, “Think about all the things that you’re used to seeing that you haven’t seen in weeks.” So daylight, birds chirping, cars going by. And she said, “I’d imagine that your senses have probably even gotten used to being in this dark, small, quiet place. And so everything is probably feeling a little bit louder or seeming a little bit brighter, your world is completely different now.” Kiesha does take that moment. She’s relieved that she’s made it out, but it’s also like the beginning of a whole new world.

TVLINE | Which brings us to what the doctor told Dre near the end of the episode: It’s very common for people who have been in Kiesha’s situation to have suicidal thoughts. And we definitely saw her with the noose in Omari’s basement. Can you give me a sense of her mental health as we move into the end of the season?
Yeah, Kiesha’s different. I mean, it was heartbreaking to come to terms with, but Kiesha’s different. She was kidnapped and held for weeks in her own neighborhood. So not only is her world different, but her perspective of how her family feels about her is different, too. Because it’s like, “I was in the neighborhood, y’all. I was down the street,” you know? She questions everyone after this. Things happened to her, and she didn’t have a choice or a say-so with what happened with her body, so I think that changes her as, well. We’re used to seeing Kiesha free and grounded and taking ownership over all parts of her, and she is definitely broken after this. It’s a whole different world for Kiesha. It’s a whole different Kiesha.