There’s a disconnect that happens, looking at the bland, vacant face of Joseph James DeAngelo: This? your brain wants to say. This flaccid, ineffectual, 72-year-old is the Golden State Killer? This is the man who raped, murdered and stole with impunity for decades? The man who took diabolical delight in making sure his victims knew they’d never be free of him?

Indeed, that’s the response that even some of the survivors of DeAngelo’s attacks have in I’ll Be Gone in the Dark‘s finale, which chronicles the capture of the man previously known only as the Visalia Ransacker/Original Night Stalker/East Area Rapist/Golden State Killer. “This pathetic old man is the monster?” Jennifer Carole, the daughter of murder victim Lyman Smith, asks incredulously.

The hour is bittersweet on several levels — in part because true-crime writer Michelle McNamara didn’t live to see her years-long obsession with the case help bring DeAngelo to justice — and it features interviews with the serial killer’s family members and former fiancee — yep, that “Bonnie.” A few major revelations:

* Bonnie Colwell dated DeAngelo in college, and they eventually were engaged. But his behavior grew increasingly troubling (“so many of the things we did together, he pushed me toward fear”), and she broke it off after refusing to help him cheat in a class. Two weeks later in the wee hours of the morning, he tapped on her bedroom window, held up a gun and demanded that she accompany him to Reno so they could marry. Her father intervened and DeAngelo left; Colwell never saw him again. She adds that she doesn’t carry guilt about the attacks — after all, it’s not her fault that he seemed to be acting out some twisted revenge play against her when he committed his crimes — but “the empathy for the women who were attacked? I can’t turn that off.”

* DeAngelo’s nephew Wes Ryland drops a few bombs. The first: He remembers waking up one night as a child and seeing a man in a ski mask who told him to go back to sleep. Ryland’s childhood home was in Rancho Cordova, very close to a number of the attacks, causing Ryland to have the horrified notion that perhaps his uncle used the house as a safe haven to evade capture. The second: Ryland’s mother, who was DeAngelo’s sister, was raped by two men while the DeAngelo family lived in Germany. She was 7. DeAngelo witnessed the assault. “The very thing that happened to my mother is the very thing my uncle did to other women,” he says, trying not to cry. “I don’t understand that.” 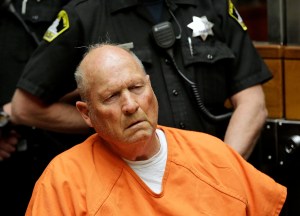 * How did law-enforcement officials zero in on DeAngelo? It’s far more complicated than this, but essentially they used old DNA samples from crime scenes and online DNA databases (think 23andMe) to find their man, then went through his trash to get a DNA sample they could compare against the original. Science!

* DeAngelo’s name was not on McNamara’s hard drive, meaning she’d never singled him out as a suspect. But she had profiled him so well that she’d keyed in on several major attributes, including his law-enforcement background and his military history.

* Lisa Ortiz, DeAngelo’s cousin who lived with him for a while, interviews that she can’t reconcile that the Golden State Killer and the man she considers a surrogate father are one and the same. After he was taken into custody, she wrote him a letter. “You were a good dad. That is the one thing I know to be true,” it reads in part. “I hope you did care about me, because my heart is forever broken.”

* Patton Oswalt meets a few of the survivors at a book-signing event for McNamara’s work in Sacramento. It’s sweet and sad.

* Many of the survivors meet up for a gathering a year after DeAngelo was arrested. (Side note: Is it weird that seeing Gay and Bob Hardwick walk up to the house nearly made me cry? Is it weirder that I did cry when he notes that they’re the only marriage that survived the attacks?) “We’re not just survivor sisters, we are a survivor family,” Kris Pedretti tells the assembled women and men. Later, after revealing that she’s in therapy to deal with what the previous year dredged up, Gay says that she wanted two things for most of her life: to see her attacker sent to jail for his crimes, and for her to go to France. And both things happened this year: “He’s going to prison, and I’m going to Paris.”

* A title card at the end of the episode notes that in June 2020, DeAngelo pleaded guilty to 26 charges, including 13 counts of first-degree murder and 13 counts of kidnapping. He also confessed to all of the East Area Rapist attacks. In exchange for his guilty pleas, he received 11 consecutive life sentences.

Now it’s your turn. In the polls below, grade the finale and the docuseries on the whole, then hit the comments with your thoughts.