O-T Fagbenle has never been a member of a boy band… despite the mountain of photographic and video evidence that suggests otherwise.

The new British comedy Maxxx — which Fagbenle (The Handmaid’s Tale) wrote, executive-produced and stars in — follows the titular former member of a pop group called Boy Town who is trying to make his solo musical comeback. The show often gives its audience flashes of Maxxx’s Boy Town heyday, which means viewers get a lot of music-video footage, teen-mag photo shoots and the like.

“We wanted to have a certain, glossy feel for the show, a certain breadth and depth, but we also wanted to have this multiplicity of footage which, if you were dealing with a real boy band, then you’d be able to draw from,” Fagbenle tells TVLine, adding that pulling together Maxxx’s fictional past was a lengthy endeavor. “We also had these, like, guerilla shoots where we would see an opportunity and just go and do a flash shoot in central London. Or I was on holiday in Mexico, just quickly shoot and lay me on the beach. Or another time, there was a snowstorm in New York, and we just went out and shot there. We just looked for all these opportunities to create this tapestry of a life and yeah, it took years to amass some of that.”

In advance of his series’ American debut, we chatted with Fagbenle about what it’s like to work closely with family (his brother, Luti Fagbenle, also executive-produces), how Meloni’s out-there look came about and why — and this is a big one — things might be looking up for June and Luke on The Handmaid’s Tale in Season 4.

TVLINE | From what I can tell, it seems like Maxxx is the kind of role you were looking for but couldn’t find, so you created it yourself.
That’s definitely a large part of what happened. I think you know, I wear different hats. So I tas an actor, that was what was very motivating for me. As a writer, there were some things I wanted to talk about, some issues, both large and small, that I wanted to explore. And then as a director, I had different ambitions, as well. So, yeah. That was definitely a large part of it.

TVLINE | How long was Maxxx brewing in your head before it became a show?
It came together relatively quickly… On one level, about four years ago, I first came up with the idea and I started developing it with my brother. But you know… Stephen King is one of my writing heroes, and he talks about stories being fossils that already exist in the ground, and the job of the writer is to try and unearth the story. So maybe the answer is it’s been brewing for four years, but maybe it’s always been there and I managed to discover it. [Laughs]

TVLINE | How did you decide exactly how many Xs should be in Maxxx’s name?
Oh, triple X! [Laughs] I mean, like there’s all kinds of like X-rated movies. That was a no-brainer. It was three or nothing.

TVLINE | What’s the working relationship like between you and Luti?
He’s a man who can just make the improbable happen. I can’t tell you the amount of times we were told no, X can’t happen because of Y, and Luti came up with a solution for it. I mean, time and time again. He is so responsible, along with Nick [Collett, Tracey Ullman’s Show], the other director, for the scope and scale of this show. I loved working with him, because he’s a person who lets me push him to be better, and he pushes me to be better. He’s a fun guy.

TVLINE | Chris Meloni’s look as Don is just beyond — the earrings, the sunglasses, the kilt at one point. Who came up with the way that Don Wild would look?
[It was] absolutely collaborative with him. He really had a very strong idea about the character. He came in with this great inspiration, and Christelle [Gbeudjeli], our makeup artist… she’s incredible… Between me and Chris and Joanna [Hir], our designer, we developed Don. Kristel, Joanna, and Chris are the ones responsible for his incredible look. And, of course, Chris is responsible for his incredible performance. He’s unbelievable in it. 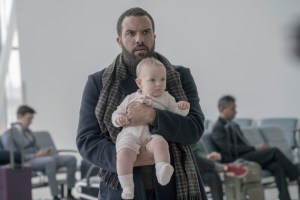 TVLINE | Let’s talk about The Handmaid’s Tale for a minute. The scene in the Canadian airport between Luke and Serena was a huge one — do you think that interaction shifted his perception of her at all?
One of the advantages of having an actress as supremely talented as Yvonne [Strahovski] is that she moves you. You cannot be unaffected by what she brings. As Luke, in that situation, I have to fight that, you know? She came with a connection to that child which was untenable for Luke… I think human beings generally have an intolerance for ambiguity. It feels very uncomfortable; we want people to be evil or good. It’s hard to tolerate that most people have both, and indeed for Luke in that instance that was really challenging, And so what he did was, he took that and he stuffed it down to the bottom of the pit of his stomach and he fed off of his rage and anger — justified rage and anger — toward her and the institution and system that she represented. So yeah, I think he was shaken by that meeting a little. But fundamentally, when you’re talking about the safety of your family, that that tops everything.

TVLINE | Later in the season, Luke and Fred come face-to-face at the detention center, and it goes south very quickly. I think the line that sets Luke off is something like, “Even if you ever see June again, I’ve changed her. She won’t be the person you remember.”
Right.

TVLINE | Talk to me about why that hit Luke so hard, so quickly.
They had such a good thing. That family unit was so good, you know. It wasn’t perfect, but it was great. Also, I think Luke carries around a certain sense of responsibility for not being able to have done more to protect her. So he feels responsible on some level for all that’s happened to her.

TVLINE | Watching Luke watch the kids get off the plane at the end of the season was heartbreaking. In your opinion, or based on what you’ve talked about with producers, do you think his hope is waning?
Oh, I think his hope is increasing. [Laughs] I think, more than ever before, there are signs of cracks in the wall of Gilead. And he’s ready to smash through that — if he could muster a way.