Rest easy, fans of Fear the Walking Dead. Not as easy as, say, Madison, Nick or Travis, but easy nonetheless. The AMC drama at last has a premiere date for Season 6: Sunday, Oct. 11, at 9/8c, it was announced at the show’s San Diego Comic-Con @ Home panel on Friday.

As you would expect, given that by the end of Season 5’s finale, Lennie James’ embattled Morgan had been shot and left for dead — well, soon-to-be-undead — by the villainous Ginny, his fate was a hot topic among the panelists. Among them were the head of all things Dead, Scott M. Gimple, showrunners Andrew Chambliss and Ian Goldberg, and Alycia Debnam-Carey (Alicia), Colman Domingo (Strand), Jenna Elfman (June), Ruben Blades (Daniel), Danay Garcia (Luciana) and Karen David (Grace). “I think [Morgan] needs a couple of pints [of blood], at least,” joked Gimple. 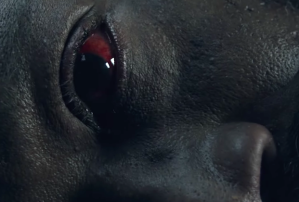 Certainly, the Season 6 trailer seemed to want us to remain concerned about Morgan’s fate. Check out that red eye (right)! “It’s not allergies,” said Chambliss. “There is something going on with Morgan.” But the fact that portrayer James was on the panel, too, strongly suggested that the hero, a crossover from The Walking Dead, was going to pull through.

As previously reported, ahead of Season 6, Colby Hollman (Wes) and Mo Collins (Sarah) have been upgraded from recurring to series regulars, and 18-year-old Zoe Colletti (Showtime’s City On a Hill) has been added to the cast as Ginny’s kid sister, Dakota, who Gimple said would show us a whole different side of the Big Bad. Of course, it remains to be seen when the show will be able to complete Season 6. Prior to the shutdown, “we were thisclose to finishing the first half of the season,” said Chambliss. Now “we’re kind of in a waiting game. We finished writing Season 6… and we’re waiting to see when we can come back” safely.

That said, “we’re getting kinda antsy,” he added. “Ian and I acting it out isn’t that much fun.”

After a fan noticed how lush a beard Garret Dillahunt (John) is rocking in the trailer and sent in a question, Gimple admitted that “not only is there a time jump [ahead], there might be time jumps. Like in 24 when the clock comes up, it will just be Garrett’s chin” showing the passage of time.

Goldberg also shared that “we will see Dwight and Sherry this season.” But, since the marrieds have been apart since Season 7 of The Walking Dead, their reunion might not go the way the former Saviors — or viewers — imagine it will. “He’s a different person now,” the EP noted. “Who knows? She may be, too.”

To check out the Season 6 trailer, press PLAY on the video above.