“End of the Line” wasn’t just the title of Fear the Walking Dead’s Season 5 finale and the Traveling Wilburys song that Daniel and Grace sang at John and June’s wedding. It also appeared to be the point at which one of our heroes had literally arrived as the hour drew to a close. For whom was it seemingly curtains? And how dire were the straits in which the rest of our regulars were left after being “saved” by Ginny? Read on…

‘YOU WON’T BE TOGETHER ANYMORE, BUT YOU WILL BE ALIVE’ | In the episode’s prologue, after Dwight thought that he heard Sherry on his walkie-talkie (though she couldn’t hear him to respond), he happened upon four horses, saddled but with no riders. Immediately, he took them back to Humbug’s Gulch, where Morgan & Co. were busy lamenting the fact that they would be separated once they’d been “rescued” by Ginny. If the horses survived out there, that meant that Ginny had lied about the dried-up watering hole — there had to be a water source nearby. So they could make Humbug’s Gulch work as a home. First, though, they had to clear out the walkers. Their plan? Morgan, riding with Grace, John, June, Dwight and Strand would lead them away on horseback, then use them, Whisperers-style almost, to scare Ginny into leaving them alone. Somehow, the horses went along with this plan.

Once Humbug’s Gulch was more or less cleared out, Al dispatched a straggler — a straggler wearing one of the equestrians’ keys, meaning that the place’s previous occupants hadn’t refused Ginny’s help, as she’d said, they’d fought back and killed some of her guys in the losing battle. Meanwhile, Strand and Daniel spotted Ginny and her crew arriving where their old convoy was parked. Oh, crap — they’d forgotten all about Luciana, who was with the equestrians. Their plot to intimidate Ginny with a herd of walkers would put Lucy in danger, so it had to be called off. Dwight tried to sacrifice himself to lead the herd away, but everyone rode to his rescue, ultimately leading the walkers into the river, where they were washed away by the tide. Now, short as they were on arms, they had no weapon to use against Ginny. While Strand went to sweet-talk Ginny, the rest of the group returned to Humbug’s Gulch and took Morgan’s suggestion to, for however long they had left together, “live life the way we said we were gonna.” 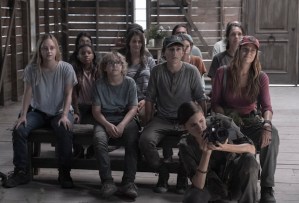 ‘I’VE LOVED YOU SINCE THE FIRST DAY YOU WASHED UP ON MY SHORE’ | What that meant was throwing John and June a very lovely, thrown-together wedding at which they exchanged vows and gratefully accepted Dwight and Sherry’s bands as their own. Of course, the happy moment was short-lived. Right on cue, Ginny crashed the wedding. Standing firm, Morgan convinced her to take all of them, even the old and sick. But it was one step forward, at least one step back, because when night fell, everybody started to really feel the weight of their impending separations. Sarah couldn’t bear to be parted from Wendell, Charlie couldn’t bear to be parted from Daniel… Oh, come on! Ginny’s people wouldn’t even let Daniel travel with Skidmark. That’s just plain evil! Even John and June were split up; they’d spend their wedding night apart. Before Grace was taken away by Ginny’s doctor, Morgan at last confessed to her that he’d felt something at the carousel, maybe the same thing he had with Jenny. In turn, Grace admitted that she’d felt it, too. Better (too) late than never?

Finally, Morgan was left alone to go with Ginny. Only she didn’t intend to take him, it turned out. As she took her shot at him, he lashed out with his stick and knocked her down. He still took a bullet to the chest, but he wasn’t dead, not yet, anyway. Picking a gun off of a felled walker, she pointed it at Morgan’s head. “I just resent your face so much,” she said. And when she pulled the trigger… nothing. It must have been a prop gun from the costume department at Humbug’s Gulch. Just then, she received a call over her walkie-talkie. Grace wasn’t sick, the doctor informed her. She was just pregnant (as a result of her one tryst with the co-worker she’d liked). At that, Ginny told Morgan, “I do hope you die, but that’s not the point anymore; I hope you heard me,” and drove off as walkers began approaching. If she hoped he died, I’m not sure why she didn’t finish the job. Regardless, as walkers started lumbering toward Morgan, he sent one last message to his friends, urging them all to live. As the hour concluded, it looked an awful lot like Morgan was a goner. But was he?

What do you think? Would Fear TWD really kill off Morgan? Grade the finale in the poll below, then hit the comments with your theories, quibbles, reviews… the works.