It’s an indicator of how ridiculously depressing 2020 has been so far that when we get evidence in this week’s The Chi that Kiesha is alive — even though she’s being held captive in some predator’s basement — it feels like a huge win.

After all, she’s not dead like the poor young woman found by the lake in last week’s episode. But the fact that Kiesha’s captor is doing things like bathing her and keeping her every move under surveillance certainly makes it seem like there are more horrible acts going on in that prison than we see during the hour. (And we see some pretty rough stuff.)

The hour opens with Kiesha sitting in a bathtub while the man washes her; she’s traumatized as he talks about how she was “dressed like a slut” when he found her, but that “Daddy’s gonna make you clean.” (Side note: Shudder.) Later, he dresses her in a track suit and force-feeds her cereal. There are a bunch of trophies and a treadmill in the background; everything points toward some kind of track fetish, which makes everything just a little more horrible, right?

Even when the man isn’t there, he’s got his creepy eye on Kiesha: There are several cameras all over the basement apartment, even one in the bathroom, and he lets her know that he’s watching her even when she pees. So when a blackout knocks out all the power on the South Side of the city — and turns off the cameras — Kiesha realizes that it’s her one chance at a possible escape.

She throws herself at the door to her room until it gives way, then runs up some stairs. She somehow gets herself through that door, as well, and falls on the ground outside, sobbing in relief. She’s free! But then the man who kidnapped her appears in the doorway and rushes out, grabbing her and carrying her back inside as she screams.

Somewhere in the vicinity, Ronnie — who’s just returned Ethel to her nursing home after she went missing during the blackout — hears the young woman’s cries. “Kiesha?” he says, right at the end of the episode.

Elsewhere in the Windy City: 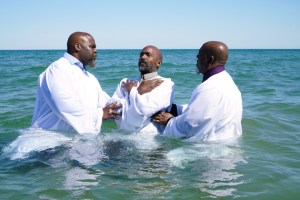 * Papa’s father baptizes Ronnie and gives him some new clothes.

* Roselyn and Douda talk campaign strategy while having sex in his office. Later, when the power goes out, she helps him mobilize staffers and volunteers to provide the South Side with pizza, flashlights and other assistance. At the end of the episode, Jake and Douda are having a nice moment listening to jazz together when Big Mike shows up: There’s a guy who was defacing a Perry campaign poster, and what does Douda want to do with him? Jake asks if he can accompany his surrogate dad out back, and Douda says yes. So Jake watches as Douda beats the pizza sauce outta the guy. Then, Jake runs.

* A social worker shows up, unannounced, at Trig’s place to inspect it and see if it’s fit for Jake to live in. She’s not impressed by a broken electrical outlet, and she questions whether Imani has a business to style hair in the home. There’s also some contention about how Trig referred to Imani as his “wife” on the paperwork he submitted, even though they’re not married. Trig gets very defensive very quickly, but Imani defuses the situation a little, and the social worker advises them to make some changes in advance of the next step in the process. Later, Trig finds Imani packing: She’s worried that her background — she killed her father in self-defense; he tried to choke her after finding her in drag — will mess up Trig’s efforts to get legal guardianship of his brother. “I need you here,” he tells her. “Jake needs you, too.” She relents. Later, as they’re sitting in the living room, there’s a knock at the door: It’s Jake, and he’s traumatized after the violent attack he witnessed. Trig sits his brother down on the couch and hugs him. 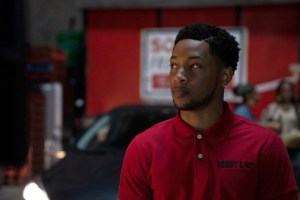 * The blackout forces Emmett and Dom to take their after-hours eatery outside. The barbecue event is such a hit that it draws a huge crowd… including Sonny, who angrily informs Emmett that he’s known about his duplicity but was hoping that Emmett would grow up and admit to what he’s been doing. The older man calls Emmett “the son I never had” and says he’d been looking forward to the time when he would settle down. “Guess I was wrong,” he adds, ordering Emmett off his property. “You wasn’t nothing but a waste of my time.”

* Jake, Kevin, Jemma, Papa and Maisha investigate an abandoned building they think is haunted. Honestly, the scariest thing there is the disdain Jake aims at Jemma: He really doesn’t like her. When the blackout happens, they get spooked and quickly exit: Because car services are taking too long, Kevin and Jemma choose to walk home through some sketchy areas. Later, they get something to eat and dance with Papa and Maisha — who’ve agreed to date exclusively.

* Jada accompanies Tomas to a family party, where she learns that he is a widower. She nearly has a panic attack in the bathroom over the revelation, but he calms her later with assurances that there’s something real between them.

Now it’s your turn. What did you think of the latest episode? Sound off in the comments!