As is the case with most Adventure Time offerings, however, “BMO” raised just as many questions as it answered. Fortunately, TVLine was able to get executive producer Adam Muto on the line to shed some light on the situation. Read on for our full Q&A:

TVLINE | The last time we talked was for the Adventure Time series finale. When you were putting that together, did you know Distant Lands would be happening, or did you really think the finale was the last we’d see any of these characters?
At the time, there wasn’t particularly a need to have more. But having had some success with the [Stakes, Islands and Elements] miniseries, we sort of pitched that as a way to extend it without just doing more episodes. It was a way we could keep it special and focus on other characters. At the time, they were into the idea, but there wasn’t a place for it, so we just put it on the shelf.

TVLINE | With only four episodes in Distant Lands, how did you decide which four characters — or pairs of characters — you were going to focus on?
That’s been one of the tougher parts, figuring out who to focus on, and how obscure is too obscure. There are a lot of characters who could do one-off episodes, but when it came to making this an hour-long thing, it felt like some of those might be too thin. BMO has been a pretty well-liked character from the beginning. The further on we go, that’s where it starts to get harder. At some point, it just starts being the show again, and we don’t want to encroach on what we did with the series. The real estate does feel more precious, so it would have been hard not to do something substantial with Princess Bubblegum and Marceline, and even Finn and Jake. If they didn’t show up at all, it would feel like we weren’t totally connecting it to the main story.

TVLINE | The one about Peppermint Butler going to wizard school sounds like the pilot of a show I know I would watch.
[Laughs] Yeah, that’s also something we realized while we were working on these. We had to build these worlds that felt like Adventure Time but also had to feel interesting enough on their own. We’re basically making four pilots for four different shows that we know will only go for one episode each. That’s a lot of work. 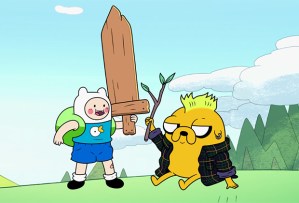 TVLINE | Realizing at the end of “BMO” that the whole thing took place before Adventure Time blew my mind. Did you know from Day 1 that you wanted to make “BMO” a prequel episode?
I don’t know if it was Day 1, but it did come to mind pretty early. We weren’t sure if it would find a space in the very end, like if it would still make sense by the time we broke the story and wrote the outlines. But that was one thing that managed to stay in. We wanted it to seem like this story could take place at any time; there’s not a lot of context at the beginning. We already established that BMO survived past the end of the series, so we were hoping that the fans’ natural assumption would be that this was set even further in the future. We didn’t want [that surprise ending] to feel like too much of a gimmick. You weren’t seeing [Finn and Jake] just to see them. It was the idea that BMO lived this long life before he met them, he just never talked about it.

TVLINE | I have to ask about a few fan theories, too. “Mr. M” has to be Martin, Finn’s dad, right?
[Laughs] It could be! I’ll probably leave it at that.

TVLINE | BMO is already on a mission when this starts. What is that mission? Do you have BMO’s entire backstory mapped out in your head?
Because he’s a pretty long-lived character, we don’t have his entire thousands of years of existence locked down. I think there’s a lot of room there to imagine. And there’s potential to explore it. But for the purposes of this episode, his mission is just to go to Mars and become a potato farmer. You have to take him at his word. That’s what he was told to do. Why was he told to do that? That’s something that’s still up for discussion.

TVLINE | Lastly, the BMO we see in the closing credits — Is he really in space in real life?
Yeah! I think it’s called the Astro BMO. That was built by Bob Herzberg, and he’s built BMOs before. Some of them have been featured in Cartoon Network things. He got connected with this program called the Quest Institute and they had a module that was going up in space … so he built a custom BMO that fit inside the module. I think it might be up there right now.

Your thoughts on “BMO”? Grade the special below, then drop a comment with your own burning questions.