Spoiler alert: We’re about to break down the first episode of HBO Max’s Adventure Time miniseries. Haven’t watched yet? Click here to take care of that.

Nearly two years after Adventure Time wrapped its 278-episode run on Cartoon Network, the franchise returned on Thursday in the form of Distant Lands, a charming — and surprisingly connected! — new chapter.

“BMO,” the first of four specials that make up Adventure Time: Distant Lands, opens with the titular robot sailing through the deepest reaches of outer space. But where is he? And when is he? None of these questions are answered at the outset, nor do we know what “mission” the li’l guy claims to be fulfilling. But he’s singing, and he’s wearing an adorable cowboy hat, so does it really matter? While repairing a hole in his ship, BMO befriends a lonely droid named Olive — well, BMO names it Olive — who transports the ship to a nearby space colony known as “The Drift.”

Naturally, BMO arrived on The Drift in the middle of a turf war between the Great Elves and the Shell People, who decide to team up against BMO despite his perfectly reasonable objections. (For example, “But I’m so cute!”) Fortunately, BMO is snatched out of harm’s way by a spunky rabbit named Y5, who whisks him away to her secret lab. And while her original plan is to knock BMO out with a hammer and inspect the worth of his parts, Y5 eventually takes a liking to the adorable robot — and Olive by association. 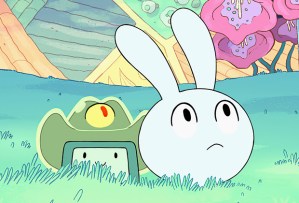 The people of The Drift also change their minds about BMO when he singlehandedly saves (most of) them from being sucked out into space, an act of unbridled heroism that earns BMO the title of sheriff. (I mean, he gives the title to himself. But sure, we’ll go with “earns.”) With Y5 as his reluctant deputy, BMO begins a new mission of restoring order to The Drift.

They eventually arrive at Y5’s little community (“Bunnies! So many bunnies!”), where her parents immediately arrange for BMO to be picked up by a mysterious gentleman known as “Mr. M.” But when there’s another emergency, the self-appointed sheriff springs back into action, catching the attention of a benevolent tech genius known as “Hugo.” (Side note: I realize that I’m using “known as” to introduce a lot of these characters, but given how shady they all are, I feel like it’s appropriate. Nay, necessary!)

Hugo takes advantage of BMO’s need to make people happy by sending him on a dangerous mission to retrieve the rare and powerful Genesis Crystal, the final piece required to complete his long-gestating “unity pod.” Hugo presents himself as the savior of The Drift, but as we later learn from CGO — a “janky, off-brand cousin” of BMO, whom we know we can trust because she’s singing the Frasier theme song when we meet her! — Hugo is actually a bad, bad man.

“He created me,” CGO explains. “We go way back… to the real busted last days of Earth.” The ‘bot recalls fleeing the planet amidst a flurry of mushroom clouds. “Hugo had a big brain and a rocket, and led an exodus to the stars on the cheap.” From there, he and his cohorts sailed through the cosmos, conning people and draining planets. 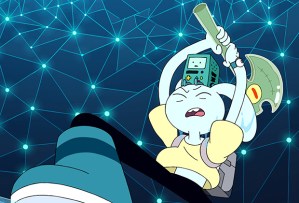 In the end, Y5 successfully exposes Hugo’s treachery, and the people of The Drift launch him out into space. It’s a satisfying ending, especially seeing Y5’s parents finally respecting her as she maps out a plan to sustain life on The Drift. With his mission complete, BMO also leaves The Drift for his next destination, which turns out to be… Ooo!? And the first people he sees upon landing is… Baby Finn and Jake!?

Things we should probably discuss…

* Um, that ending! Sure, I wondered at the beginning when “BMO” was supposed to take place, but I certainly wasn’t expecting it to be a prequel. This is like Final Destination 5 all over again!

* The mysterious “Mr. M” is clearly Martin Mertens, father of Finn the Human, right? Not only are they voiced by the same actor (Stephen Root), but he also makes that off-handed comment about how “kids are always calling out their deadbeat parents.” And I can’t think of anyone in the Adventure Time universe who embodies that better than Martin.

* If the remaining three Distant Lands installments — including one with Bubblegum/Marceline, one with Peppermint Butler, and a fourth with Finn and Jake — are even half as good as “BMO,” I will be satisfied.

Your thoughts on “BMO”? Grade the first Adventure Time: Distant Lands installment below, then drop a comment with your full review.