The penultimate episode of RuPaul’s Drag Race All Stars 5 was no laughing matter. For this week’s challenge, the remaining four queens faced off in a stand-up comedy smackdown, even if the contestants couldn’t seem to settle on the same definition of the word “comedy.”

But let’s not get ahead of ourselves. Before the queens even started writing their jokes, Miz Cracker got the drama started with some openly shady placements; as last week’s top All Star, she got to decide the order in which the comedians would perform. “Nobody’s getting a good spot!” she declared. “I could pretend that I don’t know what I’m doing, but I immediately know what I want to do. As you sister, I want to try to f–k you guys up as much as possible.”

To that end, Cracker put Jujubee first, because that’s “the worst place to be in a comedy show” and she wanted to put Juju in the “toughest position”; Blair second, because Blair has “been extremely funny this season, which pisses [Cracker] off”; herself third, because if Blair trips, she’ll look good good going after her; and Shea last, because, “No matter how well you do, they may try to discredit what you accomplish.” (I didn’t really follow that last part, but it was all pretty weird.)

I honestly don’t know how I’m supposed to feel about Cracker’s strategy. Sure, I appreciate that she isn’t hiding her intentions from the other queens, but the dramatic explanation of her evil scheme felt a little unnecessary. Maybe even a little scripted.

That said, Cracker’s plan worked like a charm. Jujubee’s routine was shockingly unfunny (even if I did laugh pretty hard at her explaining what a book is to Blair), and Blair indeed tripped, delivering an endless stream of bizarrely cruel one-liners while clumsily flipping through her notes on stage. As she would later admit, she “completely and totally choked.” (Don’t apologize to us, Blair. Apologize to Jane Krakowski for failing her!)

Meanwhile, Cracker was practically Joan Rivers compared to the evening’s first two acts. Confident, committed and energetic, she had the audience eating out of her little hand from the moment she walked on stage. (She also gets extra points for my personal favorite line: “I’m like Shea Coulee’s music, nobody listens to me!”) Speaking of Shea, the final jokester of the night also fared pretty decently with a well-curated routine of smart jokes that didn’t hit (too far) below the belt.

Then came this week’s runway, giving each queen one last opportunity to “freak out” the judges with an unforgettable look. Jujubee entered in the form of a pointy, multi-colored, checker-skinned creature; Blair was living her “feline fantasy” as the Cheshire Cat on acid; Cracker was some sort of sexy steam-punk nightmare, though it’s a lot easier to just call her a “Cher-crow”; and Shea gave us ’90s raver realness in a Mongolian lamb coat and Cookie Monster platform shoes. 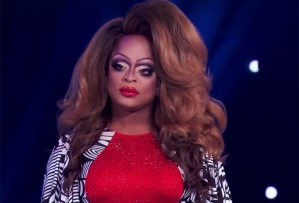 This was Cracker’s challenge to win from the jump, so it came as no surprise when RuPaul named her the top All Star for the second week in a row. But before this season’s final three queens could be revealed, Cracker had to face off against the legendary Kennedy Davenport in a lip sync battle of Reba McEntire’s “Fancy.” (I’ll be honest, when I heard we were getting a Reba track this week, I was really hoping for “Survivor.” But I have no taste, so whatever.) Despite the possibilities of this showdown, the actual battle was kind of blah — on par with the rest of the night, really. I agree that Cracker deserved the win, but it certainly wasn’t one of the season’s more memorable lip syncs.

As for this week’s elimination… “You said it yourself, these are all 10s here,” Cracker told Ru. “It is a close call. But you taught me to go with my gut, and that is what I did. The lipstick I chose is Blair St. Clair.”

“There’s no such thing as a perfect Blair St. Clair, but the Blair St. Clair that I am is pretty damn good,” she said on her way out. “And I love her.”

Then the episode took a soapy little turn. Ru took a mysterious phone call after dismissing Blair, only the viewers weren’t privy to the voice on the other end. “Yes, yes I hear you,” Ru said. “Next week? But it’s the grand finale! All right, if you must.” And then she just… let the music play, like nothing happened. (Considering the promo for next week’s finale revealed the return of this season’s eliminated All Stars, I’m guessing it had something to do with that?)

Your thoughts on this week’s elimination? And how do you feel about Cracker, Jujubee and Shea as this season’s Top 3? Vote in our poll below, then drop a comment with your finale predictions.