It’s all over but the (infant) crying.

Thursday’s Labor of Love marked the Season 1 finale, meaning we finally got the answer to the question posed in the premiere: Which man did Kristy pick to father her potential baby?

Following Marcus’ ouster (good riddance!) at the end of last week’s episode, this week opens with the last men standing: Kyle (aka “the military dark horse with a heart of gold who has slow-burned his way into Kristy’s heart,” host Kristin Davis voiceovers) and Stewart (“the stable and sexy CEO who effortlessly checks all of her boxes”).

The hour takes place in Chicago with each guy getting two days: one spent seeing the town with Kristy and the other spent meeting her family. Stewart’s up first.

Going into the hour, I thought both men had a pretty good shot. But Stewart was so weirdly awkward with Kristy from the very first moment they met up in the Windy City, it highlighted how their manner with each other never really got past Second-Date Formally Informal. She voiceovers that she’s not “100 percent” convinced that the chemistry is there with Stewart, and she’s right. 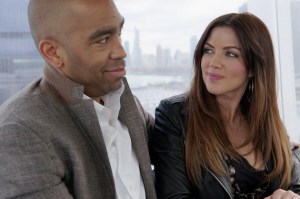 They go on a cruise around the city, then they visit her folks, her sister Sarah and brother-in-law Joe. Stewart brings flowers for the ladies and White Sox tickets for her dad, which is a nice touch. But again, something about the way he’s talking so loudly and so much makes him seem like he’s trying way too hard. Then — surprise! — Kristy’s mom reveals that Stewart’s mom and grandmother are there, too. And Stewart… starts sobbing? Like, loudly?

Anyway, everyone gets along, and both families approve of the potential partners. At Kristy’s hotel door, Stewart bids her an oddly stiff goodnight (it’s like he overcorrected for asking to spend the night last week), and Kristy says farewell in the way that you would if you’d had a real nice time and all, but there’s a pint of Chunky Monkey in your fridge and you’re dying to dive in while you knock off a few more Selling Sunsets. 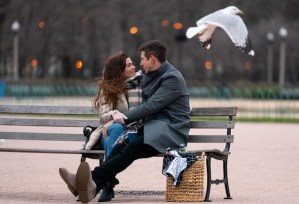 The next day, Kyle and Kristy tour the city on a trolley and spend some time by the picturesque Buckingham Fountain. She’s essentially sitting on his lap. He tells her he loves her. She voiceovers, “I can’t stop kissing him.” Yeah, they’re smitten. And when the family meet-up — which includes his parents and brother, as well as her sister Kelly — goes incredibly well… sorry, Stewart.

But first, there are a lot of tears. Kristy and Kristin both cry as they talk about how Kristy has to pick someone or choose to go motherhood alone — a point that the show hasn’t really discussed throughout the past seven episodes, but whatever. Kyle cries in an interview when he talks about how scared he is that Kristy will reject him and his very tall love. And then Stewart cries after Kristy goes to his hotel room and says that even though he meets all the requirements she thought she wanted in a partner, “when it comes down to it, it’s still not enough, and I feel like I’m falling in love with Kyle. I think that’s what’s so hard. I really wanted it to be you.”

Then she takes the trolley to meet up with Kyle at the fountain, where she asks him whether he’s cool with the idea of trying to start a family right away. Like, now. Like, NOW. When he says yes, she lets him know that he’s her guy. “I choose you,” she says, and then they skip off to where all couples go right after deciding to be in an exclusive relationship: to the fertility doctor!

They visit Dr. Kaplan, Kristy’s fertility specialist whom we met in the premiere, who says there’s a “decent probability” of their being able to conceive naturally. Then he suggests they get to boinking tout suite, and that’s a good place to leave them, I think!

Now it’s your turn. What did you think about the finale? Grade the episode and the season on the whole via the polls below, then hit the comments with your thoughts about Kristy’s final choice!