Remember when Hope was conspicuously MIA upon Clarke’s arrival at Bardo last week? Well, Wednesday’s episode of The 100 went back to explain what happened to Diyoza’s daughter — and it involved a lot of blood.

After painting a grim picture of what will happen if the Bardoans lose the final war, Anders began training Echo, Octavia, Hope and Diyoza to become Disciples. And while hand-to-hand combat and target practice were certainly part of the curriculum, Anders’ main objective was to break the four women of their “selfish bonds.” Naturally, this was done in the most twisted way imaginable: Each trainee unknowingly entered a simulation where they were given the opportunity to stop one of the others from blowing up Bardo. Echo, Octavia and even Diyoza all killed Hope in their individual scenarios, but Hope couldn’t bring herself to do the same to her own mother.

This triggered the darkest version of The Bachelor ever, with Anders assembling everyone to announce which trainees were being promoted to Disciple, and which were being shipped to Penance. As you probably guessed by now, Hope was the only one who did not receive a rose, thus explaining her future absence upon Clarke’s arrival.

Speaking of things we saw coming a mile away, it was clear from the minute Levitt entered Octavia’s bedroom after hours that the scene was going to end in sex. (We don’t make the rules, we just recap ’em.) But while we totally get the mutual physical attraction, isn’t it a little weird that Levitt only knows so much about Octavia because he probed her brain against her will? Just saying. 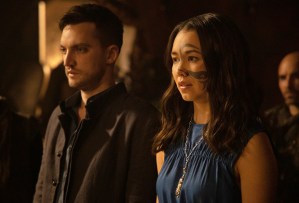 Meanwhile, Sanctum pretty much went to hell in a hand basket as Nikki gave “Russell,” “Daniel” and Raven 20 minutes to meet her at the palace… or she’d kill “Kaylee.” Against her better judgment, Indra agreed to team up with Sheidheda (“I feel like this is the beginning of a beautiful friendship!”), who in turn revealed a tunnel that connects the palace to the great hall. Helpful!

With Raven literally on another planet, Murphy and Sheidheda were forced to stall by outing themselves to the Faithful, giving Indra’s team enough time to traverse the tunnels and get the upper hand. The Dark Commander took particular pleasure in revealing himself, telling Russell’s foolish followers, “If he really was a god, why was it so easy to kill him and take his body?” (Savage.)

With Nikki in her custody, Indra then decided to go back on her word, leaving Sheidheda alone with his angry followers in a locked room. Little did she know, that’s exactly what he’d been hoping for. After Alyssa helped him out of his shackles, he proceeded to brutally murder every last Faithful in attendance, leaving us with this chilling promise: “My fight is just beginning.”