The 100 took a break from its regularly scheduled programming on Wednesday to tell the story of the Second Dawn, filling in a few key blanks about Shepherd Bill, the death of Becca Franco and the reason Clarke & Co. found bunker banners all the way on Nakara. (OK, maybe more than a few blanks were filled.)

Our story begins on the (first) last night of the world. A young rebel named Callie Cadogan (played by Iola Evans) is once again arguing with her parents about what she plans to do with her future, a dramatic exchange they’ve clearly played out numerous times already. But this is no ordinary girl and no ordinary family. For starters, Callie intends to pass on MIT in order join a group of eco-rebels known as — wait for it — Trikru. And did I forget to mention that her disapproving father is Bill Cadogan, the majestically bearded leader of the Disciples? These points are both very important, as is the current location of Becca Franco. According to a news report, it’s been exactly one year since she left Earth to work in Polaris, so what happens next shouldn’t come as too much of a surprise.

Bill’s tone suddenly shifts dramatically. “Anaconda,” he says to his wife, a code that means “the missiles are in the air.” That’s right, folks, it’s nuclear apocalypse time! With only 20 minutes to spare before the meltdown begins, Callie and her mother are rushed to a helicopter that’s waiting to transport them to the bunker. (Yes, that bunker.) Unfortunately, the friend that Callie has over isn’t one of the Disciples’ precious chosen few… so her mom tranquilizes the poor girl and leaves her for dead in the kitchen. Cool, cool.

Upon arriving at The Bunker™, Callie reunites with her brother Reese (played by Adain Bradley), who is just the absolute worst. Here’s an example: When Callie finds out there are plenty of unused spaces in the bunker, Reese still refuses to open the door to anyone who isn’t a “Level 12,” including the girlfriend of Callie’s new friend August (played by Leo Howard). August is another secret Trikru member. He’s nice. We like him. In Reese’s defense, of course, his personal flaws are entirely the fault of his disapproving father, who never shows him the love he deserves. And considering Bill is the whack-job leader of a doomsday cult, should we really be surprised that his parenting skills fall somewhere south of adequate?

Two years later, Becca lands on Earth like an angel — an angel packing a butt-load of radiation immunity serum, that is. She’s also able to hear tones emanating from the Anomaly Stone, allowing her to crack the code and open a portal. Unfortunately, her visit takes a sour turn when her beliefs begin to conflict with the Almighty Shepherd Bill. She wants to make the Disciples immune to the surface’s radiation while she and Bill “do the science” and figure out whether the portal is safe to enter, but he disagrees. After all, ignoring the truth is what whack-job doomsday cult leaders do best. 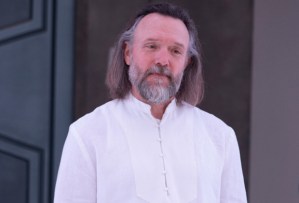 Meanwhile, Callie and Becca begin to form a very close (and very important) bond. Becca tells her all about the Flame, which Callie already knows is a reference to Prometheus stealing fire from the gods. Becca then enters another code on the Anomaly Stone, one consisting of symbols she previously thought were broken, and she’s instantly transported to… Judgment Day? Yeah, no big deal. She’s understandably terrified upon her return, warning Bill, “None of us is ready for this. Especially not you.” As we’ve established, Bill’s favorite pastime is ignoring the truth, so he immediately tosses Becca into “the box” until she’s ready to cooperate.

As we know, that cooperation never happens. When Bill learns about the A.I. in Becca’s head, he orders the device’s removal, but not before Becca shares the secret backdoor password (“Goodbye for now” in Latin) with Callie. So even though Becca is burned at the stake (barbaric much?), Callie is able to continue her mission by stealing the Flame from Reese and escaping the bunker with a small army of immunized Nightbloods. (August apparently came up with that term, by the way. Creative guy!)

And that’s where the potential prequel series would begin: Callie’s crew is roaming the surface with enough serum to immunize 2,000 survivors, Reese and Tristan (played by Degrassi‘s Craig Arnold) are following them to take back the Flame, and Bill is entering the Anomaly with his clueless Flock of Disciples. I’d also like to give a special shout-out to Callie’s mom, who sacrificed herself to save her daughter. (Man, what is it with this show and tragic parental murders?)

As you probably know, this episode was the backdoor pilot for a prequel spinoff. TVLine spoke with The 100 showrunner Jason Rothenberg about the potential series, likely titled The 100: Second Dawn. Here are a few juicy bites… 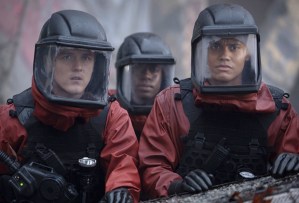 * If the prequel is picked up, Rothenberg says he’d like to do “almost Lost-style flashback episodes to pre-apocalypse times, if only because I really want to shoot in restaurants, bars and homes, and not have to be in the middle of the woods all the time.”

* “I have a plan to get back to space,” Rothenberg says. “One of the characters always dreamed of going to space and will need to in order to intentionally make Nightblood. As we know, Becca comes down to the ground on Unity Day, so there’s a lot happening in space. Clarke’s great, great, great grandparents are up there on the Ark. Same with Bellamy, Raven and all the characters. I have a plan to get us up there and meet the ancestors. If we’re lucky enough to tell that story, we’ll meet Great Great Grandpappy Blake.”

* Callie and Reese’s sibling rivalry would be a driving force on the series, but while the two are currently at odds, “I doubt that it will stay that way forever,” Rothenberg says. “If we are lucky enough to tell that story long-term, it will also have its peaks and valleys. It’s an important relationship.” That said, he insists it won’t be the same dynamic as Bellamy and Octavia, calling this more of a “Cain and Abel story.”

What did you think of Wednesday’s episode? Would you follow Callie’s adventures in a potential prequel series? Cast your vote in our polls below, then drop a comment with all of your thoughts.