The Pynk is a Mississippi strip club full of very interesting characters, and it’s where viewers spent most of Sunday’s premiere of Starz’s P-Valley.

In a moment, we want to hear what you thought of the new, hourlong drama based on Katori Hall’s 2015 stage play, P—y Valley. But first, a quick recap:

A woman (Elarica Johnson, A Discovery of Witches) stands in a flooded neighborhood and grabs a suitcase as it floats by. The woman’s bruised and bloody face makes it seem like she’s been in a fight; when she opens the case, she finds designer clothes, shoes and a wallet that contains the driver’s license of someone named Lakiesha Savage.

The woman takes the luggage and boards a bus but stays behind at one stop, where she cuts her hair and changes her entire look in the gas station’s bathroom. The next thing we know, she’s showing up at The Pynk, aka “the finest shake joint in all of P—y Valley,” for an amateur night “booty battle” that awards the winner $50. 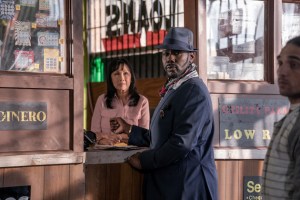 The woman doesn’t fit in with the others that have shown up to compete; when the club’s owner, a gender non-conforming character known as Uncle Clifford (Nico Annan, Claws), asks her name, she clearly comes up with something on the fly. “Autumn Night,” she replies. And when Autumn wins the contest and asks to work there full-time, she draws the attention of the club’s resident alpha female, Mercedes (Brandee Evans, The Bobby Brown Story).

Flashes of memory seem to indicate that Autumn was in an abusive relationship and that her abuser might have died from a gunshot inflicted during one of their arguments. She also may have a young daughter out there somewhere. 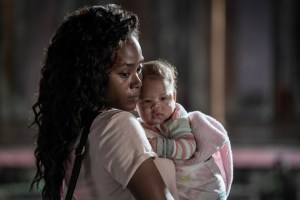 And while we’re handling backstory, here’s where you should know that: Uncle Clifford is having a lot of financial difficulty, that Mercedes’ mother is a pastor who is highly disappointed in her daughter’s chosen profession (but maybe not as sad about the money it brings in) and that another dancer named Keyshawn aka Miss Mississippi (Shannon Thornton, Power) has a new baby and a partner who hits her.

The next night, Mercedes tells Uncle Clifford she’s planning to retire after seven years at the club. That same evening, a rapper named Lil Murda (J. Alphonse Nicholson, Chicago P.D.) and his crew roll into The Pynk and wind up in the VIP room with Mercedes and Autumn. Some of the guys get handsy, Mercedes tells Lil Murda she doesn’t like his music and eventually a bouncer has to break things up. Oh, and it turns out that Lil Murda is more into Uncle Clifford, anyway; the pair spend some alone time in another room, and then Uncle Clifford tries (and fails) to get Mercedes to dance to the rapper’s track.

Speaking of Mercedes: Her performance on the stage is electric. At one point, she’s twerking with her feet on the ceiling. You can tell she’s got a ton of passion and possible even more talent — so when her mother shows up at the club and starts calling her a “ho,” it affects her greatly.

Meanwhile, a shaken Autumn rushes outside to get some fresh air and runs into a man with a camera. He explains that his name is Andre, and he’s just shooting some film for a real-estate client. They flirt a bit, and at the end of the conversation, she reveals that her real name is Haley. What Autumn/Haley doesn’t know, though, is that Andre is still parked outside the next morning, when she gets ready to go home. And he’s surreptitiously taking photos of her.

Now it’s your turn. What did you think of the premiere? Grade Episode 1 of P-Valley in the poll below, then hit the comments with your thoughts.